The agenda includes: expanding the list of industries affected by the spread of the coronavirus; providing support to small and medium-sized businesses, and upgrading procedures for individuals to receive government and municipal services

The meeting was held via video conference. 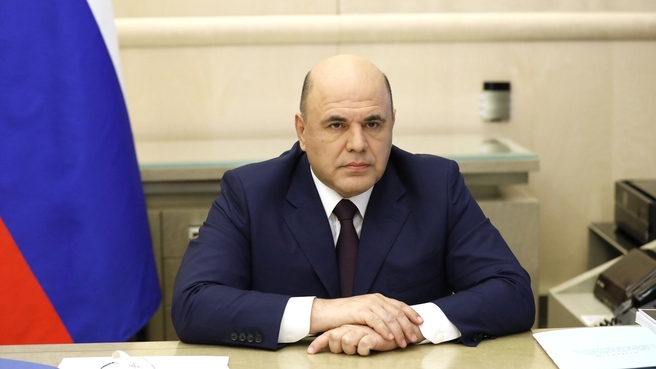 The Government continues supporting small and medium-sized businesses from the industries that were hit hardest by the pandemic but kept no less than 90 percent of their staff. We have already channelled over 81 billion roubles from the Government Reserve Fund to subsidise them. Today we will allocate more than 23 billion roubles for them. I have signed the relevant Government directive.

We are allocating additional funds because we are continuously expanding the list of affected industries. The number of potential recipients of subsidies is growing and has already reached 1,730,000 companies and self-employed individuals whereas the number of their workers reached five million. With the Government’s support these companies will be able to preserve jobs and ensure steady performance and, of course, it will help people get through this uneasy period.

The Government has issued a separate resolution to extend the deadline for submitting applications for subsidies for April 2020 for small and medium-sized companies from the most affected industries. Now they can apply for subsidies for April and May up to 1 July. So, the funds may be received by companies eligible for such support after the list of the most affected industries is expanded.

We have also decided to include in the list of affected industries the companies that are involved in passenger rail and water transport. In the first half of April, the number of passengers on long-distance trains went down by 77 percent compared to last year. Considering the massive amount of returned tickets, sales revenue decreased by over 90 percent. The situation for the industry became critical and could lead to irreversible consequences.

It is important to prevent disruptions in the operation of passenger rail and water transport. Otherwise, this will primarily affect people. We need to make sure that carriers strictly fulfil their obligations to passengers. To do this, we will extend to this sphere the state support benefits and measures for the affected industries.

Colleagues, although the spread of the coronavirus is under control, we need to continue doing our best to protect people. In particular, this year we are changing the procedure for individuals to receive state and municipal services. The relevant Government resolution has been signed.

According to the document, the Pension Fund and the Social Insurance Fund, to which citizens apply most often, will be able to simplify the procedures for providing government services and identifying applicants. Now more services will be available without in-person presence.

In addition, integrated government service centres will be able – depending on the situation in their region – to determine the number of working desks and adjust the number of services provided. And if an integrated service centre switches to a new mode of operation, it will be obliged to inform applicants about the new working hours and the procedure for providing public services.

Today, over 100 million people use the government services portal. It makes the dialogue between people and the state as convenient and effective as possible. The portal, as well as other electronic services – those of the Pension Fund, the Social Insurance Fund, which I have already mentioned, as well as the Federal Taxation Service, Rosreestr and other federal executive bodies – help save time, effort and often people’s nerves. They help comfortably solve a large number of issues that each person faces in one way or another.

We have been moving services to an electronic format for a long time. They have become routine for most people. We will continue this work on a system basis since improving and expanding digital mechanisms has a positive effect on the progress of the state itself and makes it possible to cut costs, streamline and expedite the work of a number of services.

To make citizens’ interaction with the Government even easier and the agencies’ work faster and more efficient, we launched a step-by-step digital transformation of the federal executive bodies and the industries they oversee. In fact, we are upgrading the entire system of public management on the digital basis.

The introduction of information technologies to all aspects of the agencies’ activities will allow them to work more productively with data, and will reduce and considerably speed up interaction between government bodies. Long correspondence and inefficient data processing must become a thing of the past; this is a requirement of our times.

As a result, the digital transformation will not only improve internal processes at a particular agency but will also affect the development of the entire industry. And the key is that thanks to these actions both individuals and businesses will be able to easily and quickly communicate with government structures and get necessary services in an electronic format.

We have identified those responsible for IT in most ministries and agencies, and approved a statute on managing projects in this area. Proceeding from it, agencies will be able to arrange their work so that the digital transition goes smoothly.

I ask you to pay maximum attention to this work. The sooner we complete the digital transformation, the faster people will see a positive effect when interacting with government bodies.

18 June 2021 Russia resumes flights with Belgium, Bulgaria, Jordan, Ireland, Italy, Cyprus, North Macedonia, the United States and Turkey Tatyana Golikova held a meeting of the Emergency Response Centre to prevent the import and spread of the novel coronavirus infection on Russian territory.
18 June 2021 Alexander Novak’s meeting with Aide to the President of the Republic of Kazakhstan Kanat Bozumbayev

Subject: The situation with the spread of the novel coronavirus infection.
18 June 2021 Alexei Overchuk attended a CIS Economic Council meeting

Deputy Prime Minister Alexei Overchuk attended the 90th meeting of the Economic Council of the Commonwealth of Independent States (CIS).
17 June 2021 Meeting of the Government Coordination Council to control the incidence of the novel coronavirus infection in the Russian Federation

The meeting was held via videoconference
17 June 2021 Government meeting

The meeting was held via videoconference.
28 May 2021 Meeting of the CIS Council of Heads of Government

The agenda of the meeting includes ways to intensify the post-pandemic recovery of the CIS economies, and digital transformation of mutual trade.
28 May 2021 Mikhail Mishustin took part in a wreath-laying ceremony at the Victory Monument in Minsk with other delegation heads from countries taking part in the CIS Council of Heads of Government meeting
27 May 2021 Mikhail Mishustin’s meeting with Prime Minister of the Republic of Belarus Roman Golovchenko

The meeting took place on the sidelines of the CIS Heads of Government Council meeting.
27 May 2021 Government meeting