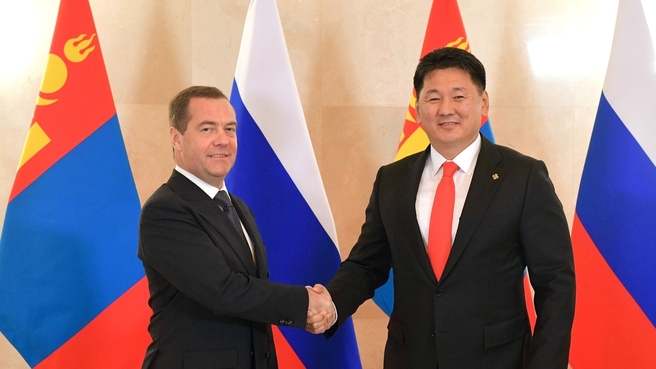 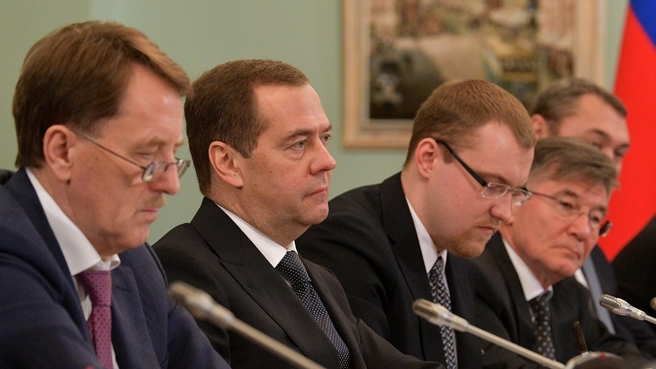 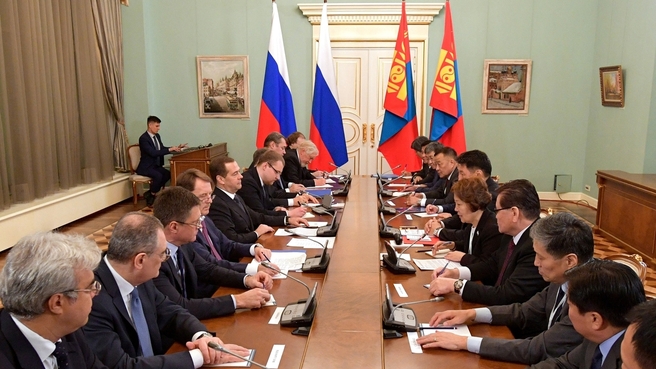 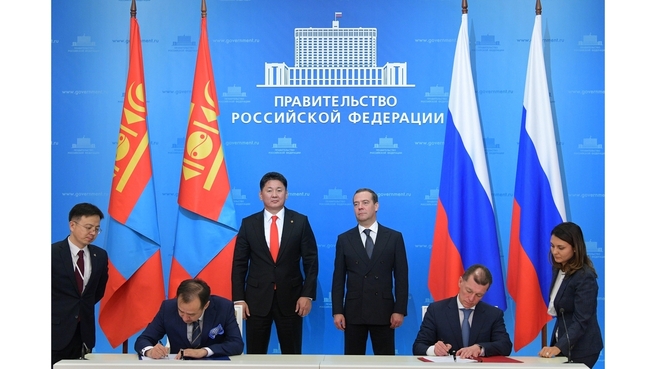 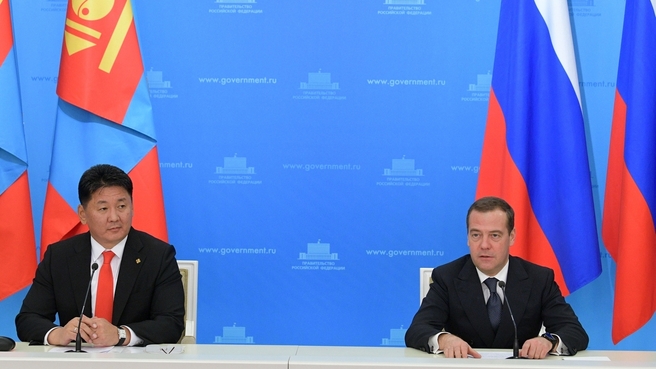 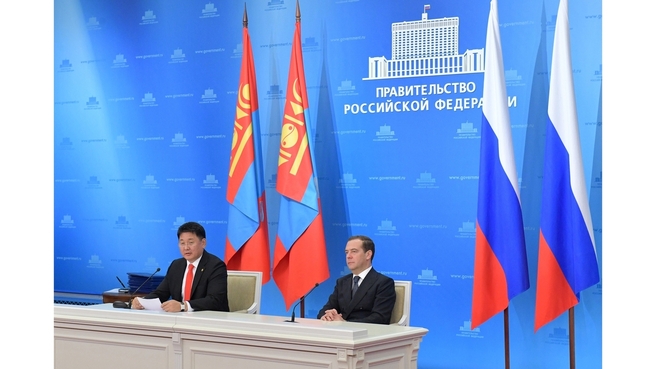 Dmitry Medvedev: Mr Prime Minister, welcome. This is your first visit to the Russian Federation as the head of the Mongolian government. It has been nine years since a prime minister of Mongolia officially visited our country. I remember well my own visits to Mongolia, a visit in August 2009 and my participation in the 2016 ASEM Summit. I would like to note that over a relatively short period of time, your country has changed – at any rate, I can personally attest to this fact.

We consider Mongolia as a friendly country and our partner. We remember and value Mongolia’s help during the Great Patriotic War. In early September President Putin also paid an important visit to Mongolia that was related to a special historic date.

We will have an opportunity to discuss our cooperation with regard to economic, social and inter-regional issues. We are willing to discuss everything that our Mongolian friends find necessary. Once again, a warm welcome.

Ukhnaagiin Khurelsukh (via interpreter): Thank you very much. Mr Prime Minister, I am also delighted to be in the Russian Federation on an official visit and this is an excellent opportunity to discuss our bilateral relations and cooperation.

It is also a pleasure for me to pass on the most sincere regards and very best wishes from President Khaltmaagiin Battulga to you personally.

The Mongolian and Russian peoples are bound by centuries of good-hearted and traditionally friendly relations. Nine years after the previous visit by our prime minister, I have the honour to pay an official visit to the Russian Federation, at your invitation. Nine years ago, Mr Batbold was the prime minister of Mongolia and it was his visit.

This year, we are celebrating a historic event, the 80th anniversary of our joint victory in the Battle of Khalkhin Gol. It is a proud moment in the common history of our countries. We are very grateful to President Putin for assigning this celebration a high priority and paying an official visit to our country.  This is yet another indication that Russia highly values the friendship and the level of cooperation that it has with Mongolia, as well as the valiance of our troops and our armies.

The Mongolian and Russian peoples are the nations that have stood side by side helping each other both during the difficult time of war and during the years of peaceful construction.

The political relations between our countries and peoples have historically been at the highest possible level. However, over the past years, our trade and economic cooperation has significantly declined. I think both parties need to keep working on promoting and intensifying our ties in trade and the economy. When it comes to stepping up our bilateral trade and economic relations, a very important role belongs to the Mongolia-Russia Intergovernmental Commission on Trade, Economic and Scientific Cooperation.

I would like to begin by thanking my colleague, Prime Minister of Mongolia Ukhnaagiin Khurelsukh for a substantive and engaged conversation covering all areas of our cooperation, which took place in a trust-based atmosphere that has been the hallmark of Russian-Mongolian relations for many decades now.

Our cooperation relies on many years of friendship, close ties in the economic and cultural spheres, and shared approaches to many international and regional matters.

Our countries are important trade and economic partners. It is gratifying to know that bilateral trade numbers have been steadily increasing since 2017. The mutual trade showed growth in 2017, 2018 and 2019; this year, it is up by approximately 13-14 percent as compared with the same period in 2018.

This does not mean that we have done all there is to do, though. There is plenty that can be done to promote our relations. I have agreed with the prime minister on starting new investment projects and improving existing ones. In particular, we discussed the Ulaanbaatar Railway (UBZD) which is the flagship of our cooperation. We can use it as a basis for building new transport corridors and increasing regional goods traffic. The conditions are right for doing so. We just need to make the effort.

We hope we will continue to upgrade thermal power plants in the Mongolian capital. An agreement on cooperation in electric power generation has just been signed and will be used to guarantee non-discriminatory access to technologies, to ensure reliable power supply, and to work in other areas. Intergovernmental agreements on amendments to the 1957 Trade Agreement have come into force today and will make it possible to open a Mongolian trade office in Vladivostok. There is also cooperation in the manufacturing industry, aircraft manufacturing, and interaction in the area of peaceful use of nuclear energy. We had a brief exchange of views and will continue discussing the most important areas of cooperation after the ceremony is over.

We have good relations in the cultural sphere, primarily, education, which we just mentioned. We have been training personnel for Mongolia for over 90 years now, with over 60,000 Mongolians receiving training at Soviet and then Russian universities during this period.

About 3,000 Mongol students are studying at our universities. The prime minister was correct when he said that this might be the most important investment. One of the largest scholarship quotas is allocated annually to Mongolia and it is constantly expanding. Excellent mutual understanding is further promoted by the fact that Mongolia is among the countries that have the world's largest number of people studying the Russian language. Of course, we find this both important and gratifying.

As regards our cultural contacts, Days of Mongolian Culture are held in Russian cities and Days of Russian-Mongolian Friendship are held in Mongolia, so things look good here as well.

We discussed several issues of international cooperation. I am confident that today's talks will give an additional boost to bilateral relations. The talks have not ended yet, and we will continue them now.

My official visit to the Russian Federation is very successful. Today, Prime Minister Medvedev and I held talks in a businesslike, friendly and very open atmosphere. We exchanged views on a wide range of issues and reached specific and important decisions.

As proven by our military partnership and challenges of the time, the traditional historical relations between our countries are based on trust. In September 2019, President of Russia Vladimir Putin paid an official visit to Mongolia on the occasion of the 80th anniversary of victory in the Battles of Khalkhyn Gol. A Treaty on Friendly Relations and Comprehensive Strategic Partnership was signed between Mongolia and the Russian Federation during this visit. Thus, relations between our countries reached a new level. The governments of our countries will cooperate to promote a comprehensive strategic partnership between Mongolia and Russia.

During the visit, we exchanged views on a wide range of issues pertaining to Mongolia-Russia relations, including trade and economic cooperation. In particular, we brought our positions closer on a number of important issues such as modernising the joint UBZD company, increasing its profitability, and Russia's participation in new railway construction projects in Mongolia, as well as working through new mutually beneficial projects. We also agreed to expand cooperation in agriculture and oil product supplies and to continue cooperation in education, culture, and scientific research. I also believe that resolving the first part of the issue with Russian real property in Mongolia, which has remained unresolved for many years, was an undisputable success. Thus, over 500 Mongolian and Russian families have finally resolved their housing problems. We are pleased that Russia supports the project to build a gas pipeline from Russia to China across Mongolia. I believe this project has been effectively launched today.

Our countries enjoy close defence cooperation, and we agreed to continue this traditional interaction into the future. We also agreed to continue to cooperate in agriculture and agricultural supplies, and boost our expansive efforts in his area. Once again, we expressed our willingness to sign a free trade agreement with the Eurasian Economic Union. I hope Russia will support us.

Notably, this visit is rich in events and has been constructive. Many documents on cooperation were signed, which, undoubtedly, will enrich it. Mr Medvedev, thank you very much for your warm hospitality extended to our delegation. I look forward to our cooperation bringing us prosperity and growth.