Dmitry Medvedev’s visit to the Republic of Uzbekistan

Meeting of Russia-Uzbekistan Joint Commission at the level of heads of government; meeting with President of Uzbekistan Shavkat Mirziyoyev. 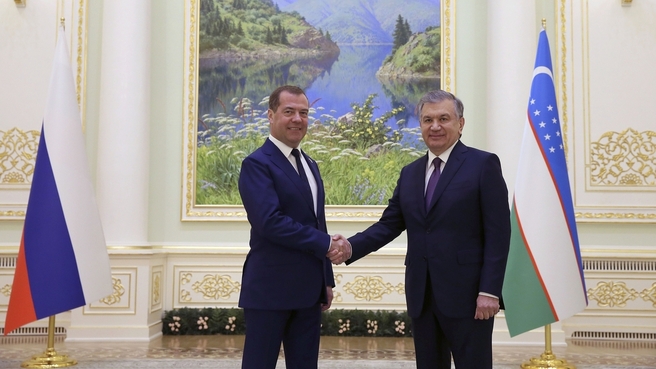 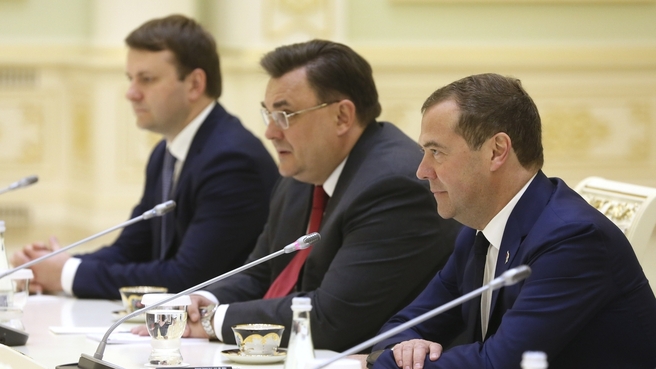 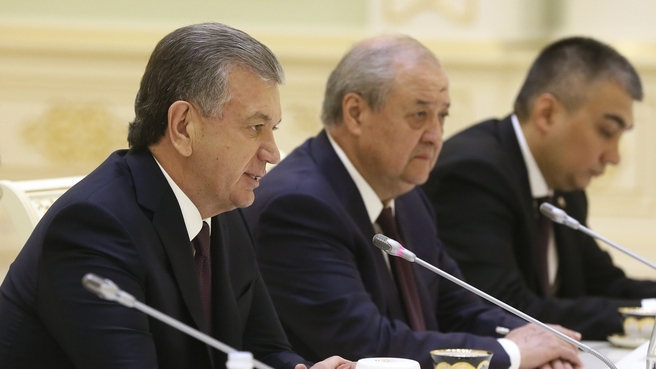 Dmitry Medvedev has met with President of Uzbekistan Shavkat Mirziyoyev. 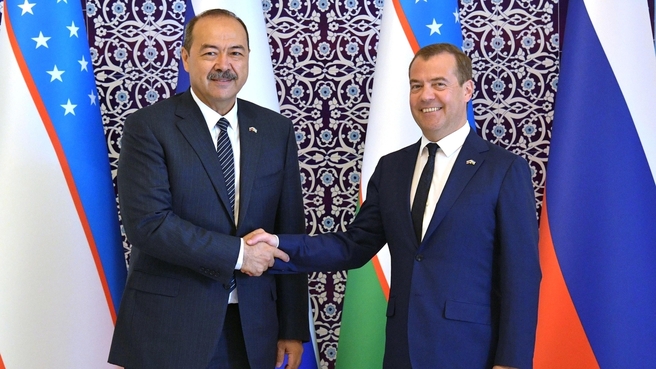 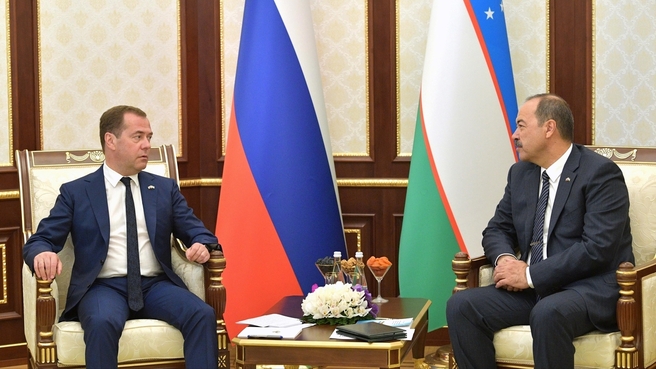 Mr Medvedev, you had a meeting earlier today with the President of the Republic of Uzbekistan, at which you exchanged views on topical issues and prospects for our collaboration. You have also indicated the need to involve the regions of our countries in these processes. We have some experience in this area. Last year, Uzbekistan hosted a forum of the regions of the Russian Federation and the Republic of Uzbekistan and a forum of universities. We hope that after today’s meeting this process will be amplified and developed. Thank you. Welcome to Uzbekistan.

Dmitry Medvedev: Thank you. Mr Aripov, colleagues, My government colleagues and I are delighted to visit Uzbekistan and, moreover, visit not only its capital, to which we paid numerous visits in the past, but also one of the regions of Uzbekistan, the ancient Khorezm and its main city, Urgench, where we are at the present moment. This helps us to better understand each other, because this kind of events held directly in a region are a guarantee that the aims that have been set by the presidents of our two countries and are being implemented by the governments will be achieved. And it is clear why. All projects are being implemented on the ground, in the regions, and by the people, who live here. It is no accident either that Russia and Uzbekistan have very good relations at the regional level. If my memory serves me right, about 80 Russian regions are in constant contact with partners in Uzbekistan.

Indeed, the decisions approved by the presidents of our two countries during their official state visits, decisions that we are tackling as governments, are very ambitious. Let me remind you that we have managed to build up trade significantly in all areas over the recent years. Last year alone, trade grew by 20%, according to Russian statistics. During our meeting today, Mr Mirziyoyev mentioned the figure of 25%. I proceed from the assumption that the higher figure is better; let us be oriented to it.

These are indeed very considerable deliveries both from Russia to Uzbekistan and from Uzbekistan to Russia. Take, for example, such crucial area as agricultural cooperation. Thanks to this cooperation alone, last year’s supplies exceeded $500 million, which means that they also grew by 20% in the course of last year. This year, they continue to grow. Here, we are using all the solutions that, in my view, have proved their worth in full measure. A case in point is the green corridor delivery model. Incidentally, this model did not work, until recently, in relations with any other country.

This is why I can fully agree with you and state once again that relations between our countries are not just good, but they are relations between strategic partners. For us, Uzbekistan is a key partner in Central Asia.

We hope that this new tool, namely the commission at the level of the heads of government, will also provide an additional impetus, will be an additional tool in achieving major objectives and implementing large-scale investment projects, humanitarian projects, which our states are putting into practice and which have been intensified in recent years.

Thank you very much for inviting us and for your hospitality. 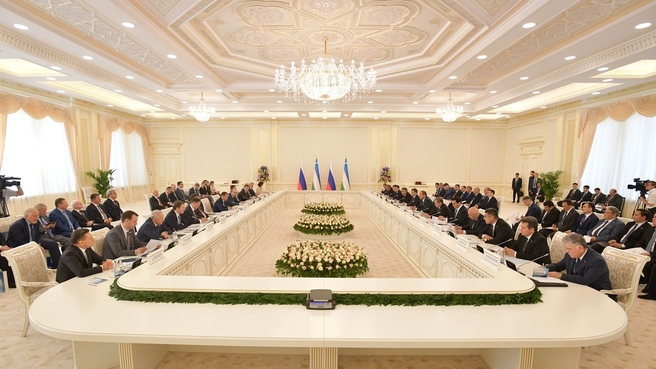 Abdulla Aripov: Members of the delegations, allow me to welcome you to the hospitable soil of the ancient Khoresm.

We have just discussed in a select format the details of our bilateral cooperation. Russia is Uzbekistan’s important strategic partner. The establishment of open and trust-based personal contacts between His Excellency Shavkat Mirziyoyev and His Excellency Vladimir Putin is a firm foundation of the further development and comprehensive cooperation between our countries.

Today’s first meeting of the Joint Commission symbolises the historic beginning of a new stage in the interaction between the government agencies of the two countries on a three-level basis.

The joint commission format makes it possible to tackle large-scale and strategically important issues. Meetings of the intergovernmental commission and specialised sub-commissions as well as regular video conferences involving the working groups make it possible in the first place to promptly address problems as they arise and increase the practical spin-off as well as the effectiveness of bilateral contacts. I am confident that by joining our efforts we will be able to create an effective interaction mechanism and bring our relations to a qualitatively new level. 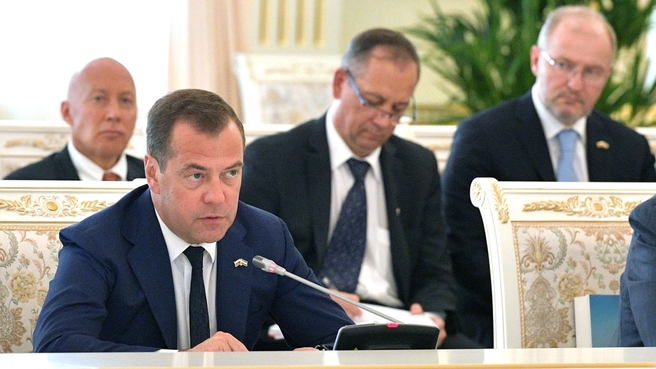 Dmitry Medvedev: Mr Aripov, colleagues, friends, to begin with, I would like to thank Mr Aripov and all our Uzbek friends for the warm reception in the Khoresm Region. We have mentioned this already. In fact, we are holding the very first meeting of the Joint Commission at the level of the heads of government of Russia and Uzbekistan. We have discussed the state of affairs in a narrow circle but actually an exchange of views began yesterday evening. We focused on our large-scale cooperation plans. I would like to note once again that we have coordination mechanisms at the level of prime ministers with a very limited number of countries, which confirms the special, privileged nature of relations between Russia and Uzbekistan. We will address the strategic issues of interaction in trade, the economy, industry, energy, investment, transport, agriculture, hi-tech, culture, education, and other spheres.

Generally speaking, our relations are developing dynamically. Uzbekistan is among Russia’s main trade partners. I have mentioned the fact that [bilateral] trade has grown by more than 20−25 percent to $4.5 billion. This is one of the highest indicators in relations with the CIS countries.

The positive dynamics persists this year as well. Trade has grown by 10 percent. This is why we have set an ambitious task of bringing the volume of trade to $10 billion. I am confident that this can be done within the short term, if we address this head-on.

Practical work is being conducted based on an intergovernmental economic cooperation programme scheduled to last until 2024. It embraces 109 projects in different fields.

It is important that Russia remains a major investment partner for Uzbekistan. The total investment amounts to about $9 billion, with over 1,100 joint ventures in operation. We intend to continue promoting cooperation in this area.

We have a number of major strategic projects, including plans to build a nuclear power station. A number of decisions concern the deliveries of manufactured goods. Incidentally, ahead of this visit I held a meeting with the VEB Supervisory Council, our development institution, and we decided to finance Russian power equipment deliveries for the Nizhnechatkalskaya hydroelectric power station construction project. VEB will also finance a number of other projects, including metro carriage deliveries for Tashkent. We are ready to consider this approach for other sectors.

We should also focus on infrastructure. Important relevant documents will be signed later today. We discussed this with the President of Uzbekistan earlier today. We agreed that this field would be given special attention.

There are very good results in the agricultural sector as well.

I would like to dwell on cultural cooperation. We have traditionally cooperated within the framework of cultural festivals. This year, Russians will be able to see works by your film-makers during the Days of Uzbek Cinema, while Tashkent will host performances by the Sovremennik Theatre from Moscow. But the important thing here is that we understand that this is just the beginning of these exchanges, or, to be more exact, their revival in full measure. A cultural and exhibition centre of the Republic of Uzbekistan will soon open in Uzbekistan’s historical pavilion at the National Exhibition Centre in Moscow. This is another topic we discussed with Mr Mirziyoyev today. And we cannot but rejoice at this prospect. Cooperation in the field of education is also highly intense. Increasingly more students from Uzbekistan are coming for study in Russia. Russia’s leading universities are opening their branches in your country; some of these are already functioning. Relevant events took place not so long ago. The National Research Nuclear University MEPhI is finalising details to open a branch.

Most importantly, cooperation has passed from discussions to practical implementation. As of today, we have prepared a hefty package of intergovernmental and interagency documents on a whole range of different issues. Colleagues will sign them later today. These documents are consolidating the legal foundation of our cooperation, which currently includes over 300 agreements. I think we will address this now. 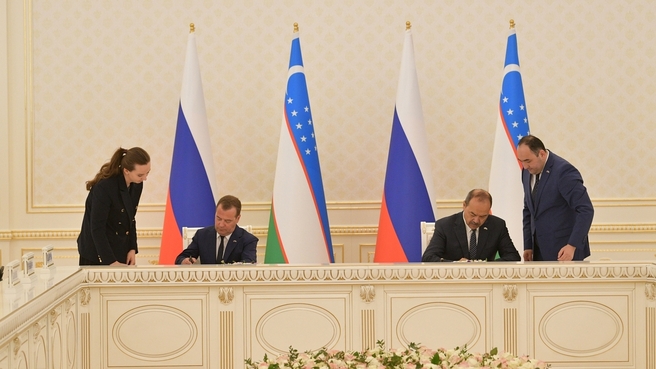 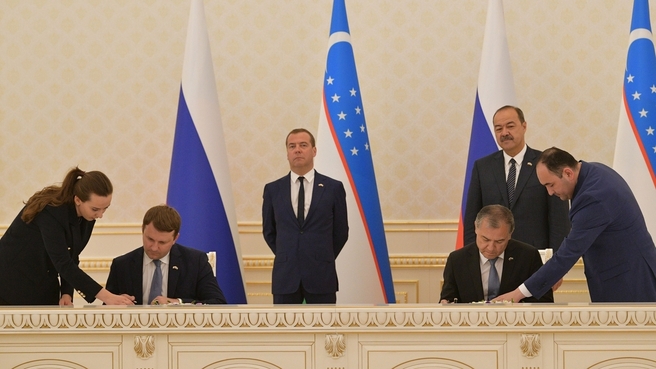 Agreement between the Governments of Russia and Uzbekistan on the Mutual Recognition of Education, Qualifications and Academic Degrees
Signed by: from Russia – First Deputy Minister of Science and Higher Education Grigory Trubnikov, from Uzbekistan – Head of the State Inspectorate for Supervision of Quality in Education Ulugbek Tashkenbayev;

Roadmap for the implementation of the Agreement between the Governments of Russia and Uzbekistan on Cooperation in the Textile, Sewing and Knitting Industries of 19 October, 2018
Signed by: from Russia – Deputy Minister of Industry and Trade Gulnaz Kadyrova, from Uzbekistan – Minister of Economy and Industry Botir Khodzhayev;

Agreement on the implementation of the investment project to modernise and upgrade the airports of Samarkand, Namangan, and Urgench in Uzbekistan between the company Novaport Holding (Russian Federation) and the Government of the Republic of Uzbekistan
Signed by: from Russia – Chairman of the Board of Novaport Holding Roman Trotsenko, from Uzbekistan – First Deputy Minister of Transport Ilkhom Mahkamov;

Loan agreement between the VEB.RF State Development Corporation and the National Bank for Foreign Economic Affairs of Uzbekistan for financing the project to supply five metro trains and related materials and technical facilities and services for the Tashkent Metro
Signed by: from Russia – First Deputy Chairman of VEB.RF, board member Nikolai Tsekhomsky, from Uzbekistan – Chairman of the Board of the National Bank for Foreign Economic Affairs Alisher Mirsoatov;