Dmitry Medvedev has spoken at the plenary session of the ASEM Summit. 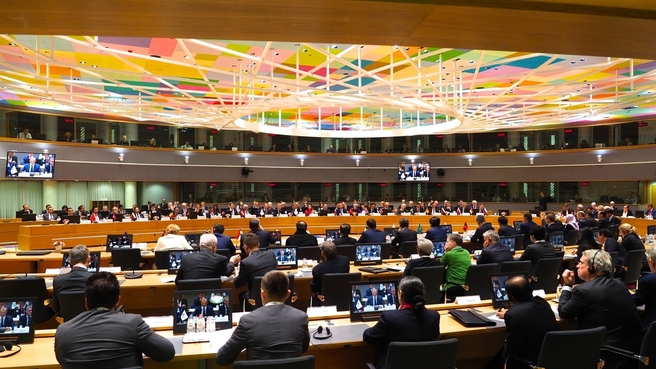 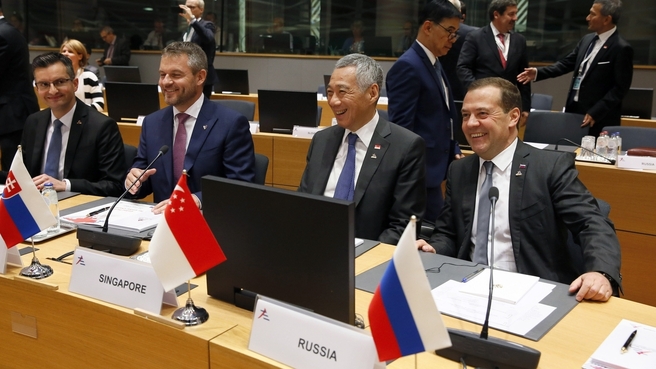 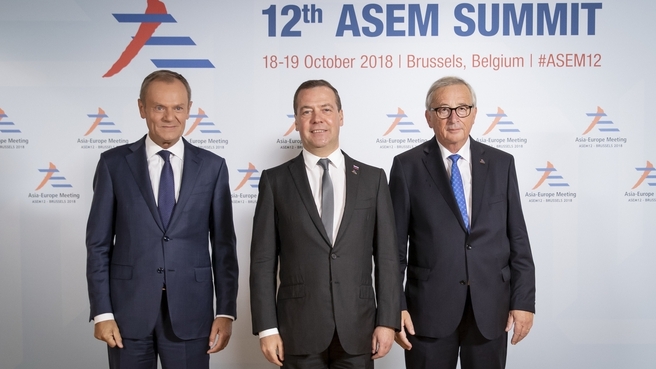 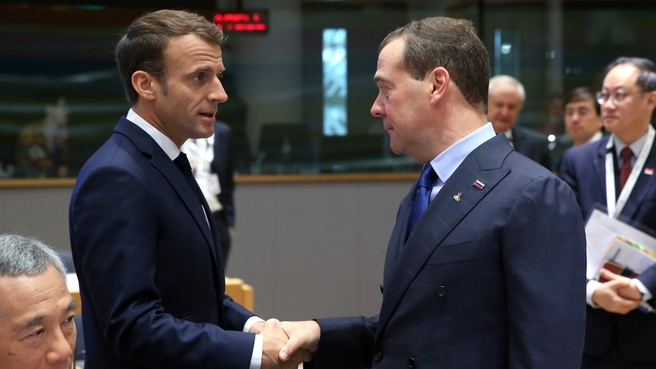 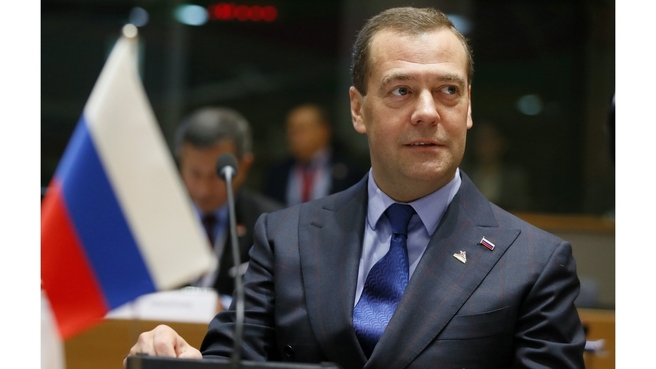 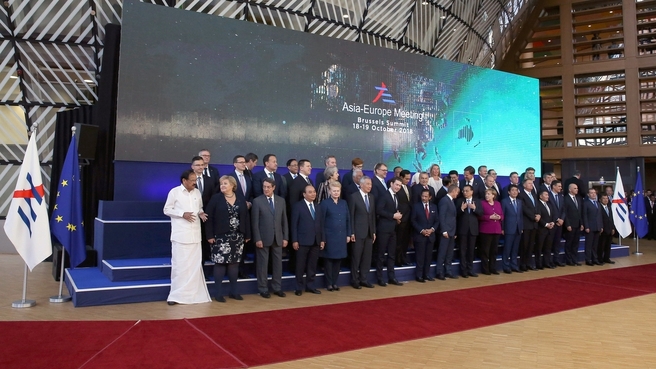 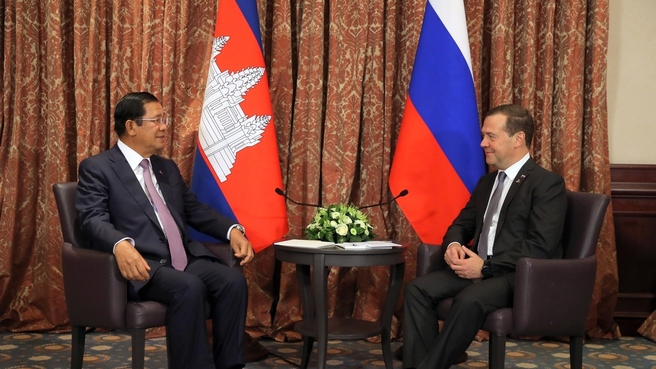 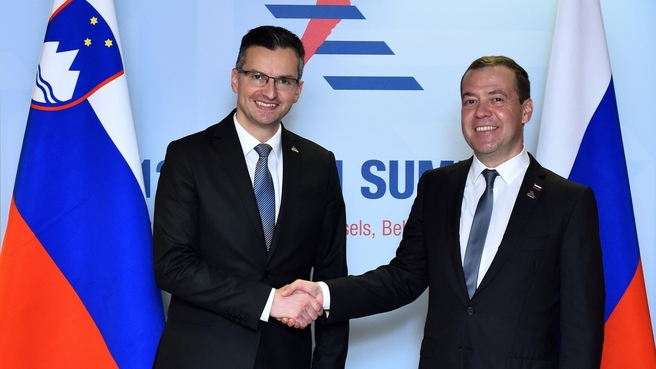 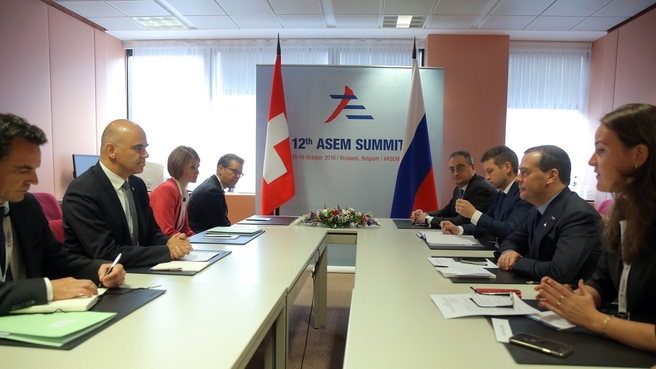 Meeting with President of the Swiss Confederation Alain Berset 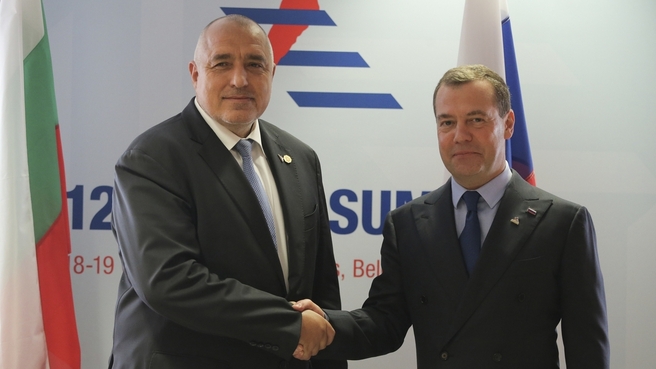 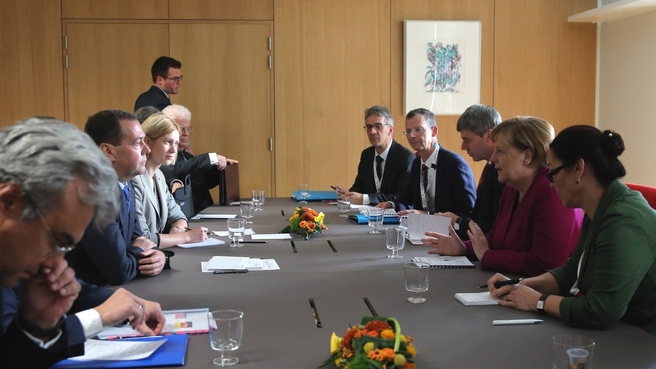 Russia joined ASEM at the 8th summit in October 2010 in Brussels.

ASEM is an open and informal interregional dialogue for countries to cooperate in politics and security, financial, economic, social and cultural affairs.

The biennial meetings of the heads of state and government are held alternately in Asian and European countries.

Eight years ago, Russia joined ASEM at a summit that took place here in Brussels. We did this to contribute to the development of the dialogue and cooperation between the European and Asian countries together with the other members.

Today, we are meeting again in Brussels. I would like to share my view on the changes that have happened since, as well as my vision of the current situation.

Our discussion is focusing on the condition of the global economy. I would like to recall yet another date. Ten years ago, in 2008, the world faced an unprecedented financial crisis. It radically changed the conditions and rules of the world economy and forced all of us to revise our financial and economic policies.

What has changed since then? On the one hand, many system-wide mistakes that were made have been identified and corrected. The adjustments apply to the financial markets and public debt management. Major banks have changed their policies. On the other hand, some things look worse than they did ten years ago. Global debt has grown many-fold. The developing markets have become much more vulnerable; we are witnessing the tightening of monetary policy everywhere.

What is most important, the protectionist sentiments have materialised. At this table, there are leaders of the countries that have in full measure faced the signs of trade wars. This is probably the saddest thing that is happening now.

Economic sanctions have invaded the fabric of international economic intercourse and become an ordinary tool of political pressure and unfair competition.

All of this is dangerous. Instead of cooperating, we, in fact, are making our relations weaker. Let me remind you that ten years ago we were much wiser and were ready to jointly counteract the negative consequences of the economic crisis.

The global economy needs clear and transparent rules, and this can only be the rules of a multilateral trade system. Russia supports the WTO, which plays the systemic role in international trade. Nevertheless, we also admit that the WTO needs to be improved and upgraded. Differences between developed and developing countries seem insurmountable at this stage, but they can be overcome.

We have submitted our proposals on reforming the WTO together with India and the European Union. I hope that a consensus will be reached.

Our interdependence is growing, and this process should be controlled. The countries that are present here are expanding their participation in international trade alliances and integration unions. And so are we. But let me emphasise a point of crucial importance: This should be based on the WTO rules, rather than take place in isolation from these rules.

Together with our partners, we are developing the Eurasian Union. As a unified structure, it is joining the system of regional agreements and is conducting trade talks.

Russian and European businesses have always been linked. We are long-term partners in energy, space exploration, industry, trade and security. Russia ranks as the EU’s fourth largest foreign trade partner. But the past few years, unfortunately, was a time of lost opportunities. Much more has been achieved in the east.

At the ASEM venue, we attach much importance to the issues of interdependence and interconnectivity. Russia plays a special role in this regard due to its vast territory. I am referring to transport and the enhancement of opportunities afforded by Russia’s geography.

Of course, such interdependence has very many facets. This includes the digital dimension. Our colleagues have just spoken about this. But today digital economy (we are developing it and adopting special programmes) is actually outside the framework of the collective influence of states. This is creating cybersecurity and other problems. We need to attend to this jointly.

It is also important to develop the ASEM educational space. What I have in mind is promoting  equal access to education and academic mobility. Russia is ready to contribute to this sphere as well.

There is a series of other initiatives, but in any case, people in Europe and Asia have similar aspirations. Unfortunately, so far their opportunities differ.

I hope that our dialogue will help us hear each other and find mutually beneficial solutions.

The meeting was held as part of the Kyrgyz President’s working visit to Russia.
25 February 2021 Government lowers maximum sales price for Sputnik V vaccine
24 February 2021 Mikhail Mishustin’s meeting with members of the Council of the Chamber of the Federal Assembly's Federation Council

The meeting was held in the run-up to the Eurasian Intergovernmental Council meeting and Digital Almaty Forum 2021.
3 February 2021 Prime Minister Mikhail Mishustin congratulates Ulukbek Maripov on his appointment as the Prime Minister of the Kyrgyz Republic
3 February 2021 Mikhail Mishustin signs documents on resuming train services with Belarus, increasing the number of flights to Minsk and restarting air traffic with Azerbaijan and Armenia
1 February 2021 Russia extends UK flight suspension
30 January 2021 Press release by Alexei Overchuk following a meeting of the trilateral working group co-chaired by deputy prime ministers of the Republic of Azerbaijan, Republic of Armenia and Russian Federation
1
Show More