Tedros Adhanom Ghebreyesus has come to Moscow for the first WHO Global Ministerial Conference titled Ending Tuberculosis in the Sustainable Development Era: A Multisectoral Response. 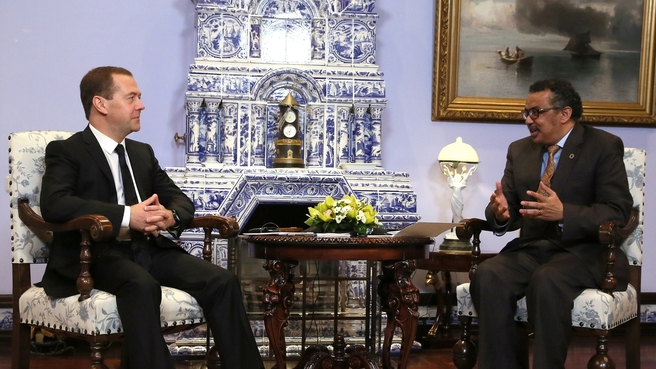 Dmitry Medvedev: This is your first visit to Russia in the capacity of WHO Director-General. Yesterday you attended the first WHO Global Ministerial Conference on ending TB. President of Russia Vladimir Putin delivered his remarks there.

We support your position on strengthening the influence of the World Health Organisation for protecting health and fighting epidemics as well as other global challenges in healthcare.

Tedros Adhanom Ghebreyesus (via interpreter): The conference is a huge success. Its attendance has increased from some 40 ministers in the past to over 80 ministers now.

You are doing a good job trying to end TB. The progress achieved in Russia over the past few years could also benefit others too who can learn from your experience. Moscow is the right place for this conference.

Today we will adopt a declaration, which will become the fundamental document at the UN General Assembly in September 2018. I believe that you will continue to be a leader in this sphere.

We appreciate your leading role in the fight against this disease. I am grateful to Minister [Veronika] Skvortsova for her contribution to end TB and in other spheres as well. She has worked very fruitfully also within the framework of the General Assembly.

Agenda: Finalising the national economic recovery plan; cleaning up of the oil spill near Norilsk; and measures to develop tourism and open the resort season.
7 June 2020 The Government approves rules for allocating funds on road improvement in Crimea Federal funding will help repair at least 166 kilometres of roadways.
5 June 2020 Mikhail Mishustin approves interim procedures for distribution of drugs to treat the novel coronavirus infection This resolution will help provide enough medicines to those who need them.
5 June 2020 Mikhail Mishustin approves rules for purchasing COVID-19 PPE to be distributed among volunteers for free Vladimir Putin instructed the Government to allocate over 1 billion roubles to purchase masks, respirators and gloves.
4 June 2020 Government meeting