Dmitry Medvedev spoke at the plenary session of the forum. 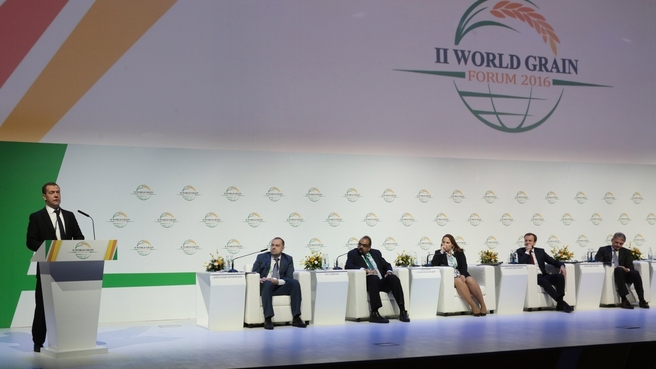 In recent years, Russia has regained its role as a leading player on the global food market. One hundred years ago, Russia was indeed the largest producer on the international food market. We lost this position, and even had to resort to importing various kinds of agricultural produce, including grain. However, we have made a big step forward since then. This year’s record harvest is one such example. Last year, we came in first in terms of the volume of wheat exports, and there are signs that we may keep it that way this year as well.

We have become a significant participant of the international agricultural market.

We are now faced with an ambitious task which is to increase grain production to 130 million tonnes over the next 10 to 15 years. We have the necessary resources to do so. In the 1990s, we saw a significant reduction in crop acreage. Now, we are in the process of returning land to agricultural use. According to some estimates, about 12 million hectares can be used for these purposes. Conversely, the amount of crop acreage is declining across the world. Russia can at least partially compensate for the loss of this resource, and play a stabilising role on the global market.

We often hear the question: What will happen when the sanctions are lifted? First, nobody is about to lift them yet. Second, the government will always support this industry precisely because of the specifics of our economy and the industry itself. That is why we recently adopted a decision to keep budget allocations to the agriculture industry unchanged at their current high level.

The global trends in agriculture are concentrated in IT and the production of a variety of sensors and robots. This process is referred to as Farming 2.0. It leads to a situation where agribusiness will go from being labour-intensive to capital-intensive. Russia is ready to participate in these processes.

It is important to engage in processing. We will continue to export commodities, including grain. Yet, it is equally important to develop biotechnology and to increase the production of various processed products.

We are now self-sufficient with agricultural products in several areas, including grain. A country like Russia must be able to feed itself. We will stay this course, and at the same time expand the geography of cooperation. For us, this goes beyond our traditional partners, such as North Africa or the Middle East. It also includes Europe, Latin America, and the fast-growing Asia-Pacific region. In order to be able to engage in all of this, it is imperative to develop the infrastructure of the grain complex. Work in this area is being done, and state-of-the-art grain terminals will soon become available for grain transhipment to Asia as well.

The world is on the cusp of the next phase of development in agriculture. Russia does not intend to miss out.

Today, agriculture is the fastest growing sector in our country. We must not lose what we have gained in recent years.