The 30th session of the Foreign Investment Advisory Council in Russia

The participants discussed proposals to improve customs legislation and technical regulation, develop the banking and financial sectors, and increase investment in agriculture, the processing industry and pharmaceuticals production. 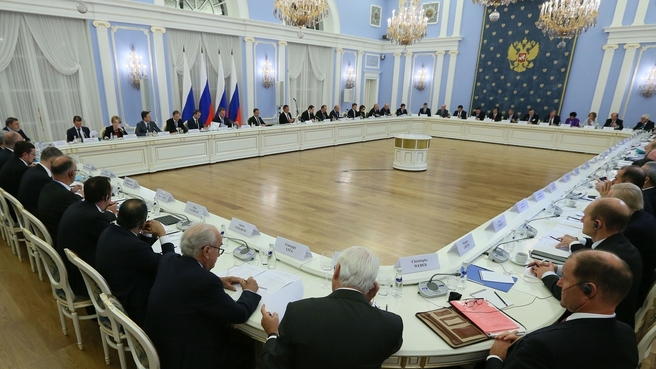 The 30th session of the Foreign Investment Advisory Council in Russia

The Foreign Investment Advisory Council, which was established in 1994, proved to be a good format in great demand and very useful for businesses.

The council’s proposals were used to formulate government recommendations, adopt decisions, launch new projects and attract investment. Recent examples include the preparation of a standard loan agreement for micro, small and medium businesses, an action plan for increasing energy efficiency in construction, and many other useful things.

Membership in the council has increased recently. This is an indication that mutually beneficial cooperation with Russia has not stopped despite an unfavourable international backdrop.

The council includes the heads of 54 global companies working in various economic segments, from agriculture and pharmaceuticals to mechanical engineering and electronics. Seven of the companies on the council have participated since 1994.

Several leading companies from Europe and Asia Pacific have joined the council’s work in several areas.

The total volume of council member investment in the Russian economy has reached some $160 billion. Over 225,000 highly paid jobs at modern companies have been created in Russia thanks to this investment.

Council members represent over 50 Russian regions, or over half of Russia. The majority of them are working in and around Moscow.

We have passed the most difficult period as the national economy adjusted to external shocks. I am referring to the falling price of hydrocarbons, external pressure and various political restrictions.

The current inflation rate is the lowest in Russia’s market economy period, or over the past 25 years. We hope that next year it will be around 4 percent, which will create fundamentally new conditions for the market.

The Russian economy is gradually moving towards a growth trajectory. Growth is still weak, but the capacity for resumption has not been exhausted. Companies that focus on expanding production and production localisation in Russia should see tangible strategic gains. Their products will generally be competitive in domestic and Eurasian Economic Union markets.

We are planning to complete the coordination of customs and tariff policies in the Eurasian Economic Union Five in the near future. This should provide strong advantages to those who have already localised production here, the members of the union and the free trade areas that are being established with other states. The first agreement on a free trade area with Vietnam entered into force on 4 October. Negotiations are being conducted with many other states. In all, up to 40 countries are interested.

We are interested in expanding non-resource exports from Russia. This is one of our priorities. We are working on various options and other support mechanisms and special institutions with this in view.

We are finding new ways of attracting investors. This year we launched a new mechanism – a special investment contract that can be used both by domestic and foreign investors. Under the terms, an investor would establish or upgrade production in Russia, while the state would commit to ensure stable conditions for doing business.

I’d like to invite everyone to attend the annual Open Innovations forum that will take place in Skolkovo on 26 October.

We continue to be open to all those who want to work in our country, have Russian partners, do independent business or sell products or services here.

Alexei Ulyukayev: There is a lot of interest in working in Russia. Today we have here 36 top managers of major global companies that invested a total of about $160 billion in Russia and are not planning to stop.

Today’s meeting was attended by more foreign participants than the previous one and even more than any meeting in the past 10 years. Indicatively, most investors represent the United States, Canada and the European Union, in particular, Germany, France and the Netherlands, that is those countries that have joined the sanctions. This fact does not prevent them in any way from working with Russia.

Instructions for ministries and departments, signed by the Prime Minister, will be drafted on the basis of this discussion. They will concern normative acts, including those regulating the current performance of ministries and departments. A good foundation for the development of investment is being laid. The flow of investment did not stop even during the worst periods in our relations with the West in 2014 and 2015. Many colleagues said they did not expect the Russian economy to adapt itself to the new circumstances so well and to start overcoming the crisis so fast.

The problems mentioned by investors concern regulations on the disposal of solid domestic waste and requirements for electronic veterinary certificates. They also touch on excise duties, VAT for companies that pay a unified agricultural tax, the development of the digital financial environment and its security, a number of bank regulations, and special investment contracts in general and in the pharmaceuticals industry in particular.