The Prime Minister answered the questions of the news programme’s host Valery Fadeyev. The interview was recorded following the Sochi International Investment Forum 2016. 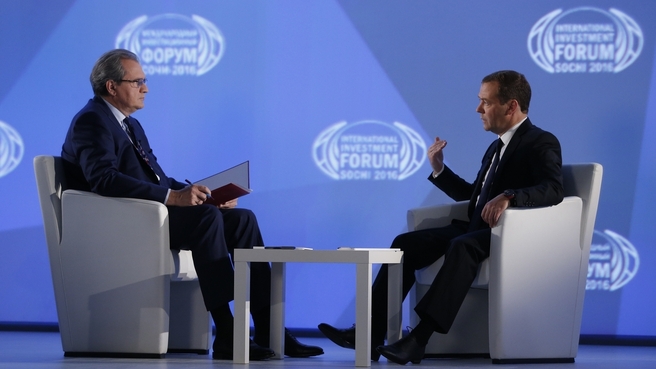 Excerpts from the interview:

Valery Fadeyev: Mr Medvedev, when can we expect to see economic growth?

Dmitry Medvedev: Economic growth depends on a large number of factors and is determined by both our domestic environment and, of course, external conditions. The world is experiencing a very serious slowdown in economic growth. Moreover, Russia’s economy is unfortunately shut off from foreign sources of financing and from a large number of foreign companies that provided our manufacturers with orders. I am referring to the sanctions, the so-called external pressure on our country. I’ll be frank: it is bad, but it is not crucial.

Structural problems have accumulated in our economy over decades – that is, distortions in the economic system. I often hear people ask: why don’t you work on this issue and why haven’t you changed the structure of the economy yet? But such challenges cannot be overcome in one or two years, or even a decade – because the current structure of Russia’s economy stems from the Soviet economy, which had developed for 50-60 years. This is the economy we have. It has both advantaged and disadvantages, but it needs reforming. That is why the economic growth depends on our success in these reforms.

Nevertheless, we expect the negative factors that have emerged in our economy in the past two or three years to exhaust themselves by the end of the year. Due to the Government’s efforts and the overall improvement of the economic situation, we expect to achieve slight economic growth ­– that is, GDP growth, with our other macroeconomic conditions being rather good. Our sovereign debt is low; we have substantial foreign currency reserves comparable only to those of the world’s top ten countries. The inflation in our country has decreased, with the price growth slower than it was in the past decades, and at the end of the year we may achieve an all-time low inflation rate in our modern history. This gives us reason to expect further economic growth.