The Prime Minister answered the questions of Sergei Brilyov, the programme’s host. 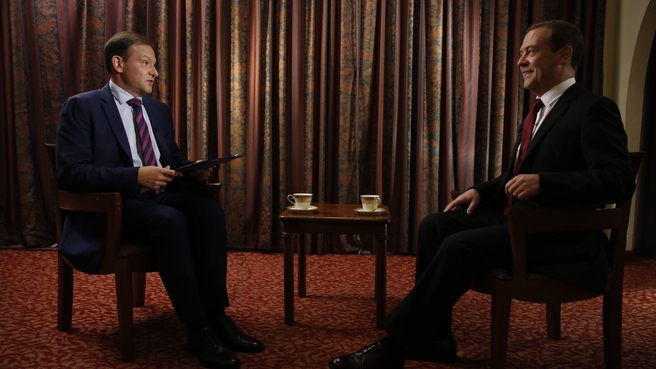 Sergei Brilyov: The Government you are heading has become the most stable Government in the history of new Russia. On the day this programme will be aired it will have been in office for four years, four months and two days. If we look back at the conditions in which your Government started working… Back then oil cost $110 per barrel. The exchange rate was 30 roubles to one US dollar. Many things have changed since then, both in the economy and in the world. There is less money but the obligations remain the same.

Dmitry Medvedev: We try to accomplish everything that is needed, even in this quite adverse economic environment. No matter what anybody says, I don’t believe there is a single financial analyst in our country who could have forecast such a rapid decline in oil prices. Yes, they fell in 1970s, 1980s and 1990s. But no one could have expected a three-fold fall in oil prices over such a short period of time.

Nevertheless, Russia has survived and continues to develop. If we talk about what has happened in these years – and various things have happened – we have achieved some substantial and, I believe, serious results. I would indicate one area – probably, the most important one.  Not that long ago, average life expectancy in the country was five to seven years lower than it is now. Now the average life expectancy is 71 years. Of course, this figure is not as high as in Japan or some highly developed European countries. But this is ten years more than the average life expectancy for men just 10 years ago. Another area: not that long ago it was fashionable to say that our country is gradually becoming extinct. But in the last two years we have achieved absolute population growth.

Sergei Brilyov: This is not because of migration.

Dmitry Medvedev: Not because of migration but because of the growing birth rate. Last year we gained 30,000 new Russian citizens. Let me reiterate: this figure does not include people relocating from other areas or other countries. This is why, even in such difficult conditions, if one concentrates efforts, energy and resources in a certain direction, quite significant results can be achieved. In the last 15 years, pensions – in the nominal terms, I would like to stress – grew by almost 15 times. In absolute terms the growth is not that big, although it is tangible if compared to 2000.

Sergei Brilyov: The second half of this year has been more successful than the first in terms of the economy?

Dmitry Medvedev: Of course, I can’t say that all of us are satisfied with the state of the economy. The situation is difficult, and not very stable yet. But, nevertheless, the economy has started its recovery and this gives us a chance to go back to the rules that were in place until recently. Moreover the decision has been taken, it has already been announced and, naturally, we will abide by it.

Sergei Brilyov: It may exasperate our TV viewers if I ask you a question about the United Kingdom’s electoral policy considering that we are on the brink of elections in Russia. My question is not about the British people but about Brexit, which was voted in a referendum this summer. The UK is leaving the EU. This was a very important signal to the rest of Europe, which lost 15% of its economy almost overnight. The UK’s GDP amounts to 15% of the European GDP.

It is clear that the British people voted, first and foremost, against two things: an influx of refugees – and there are hordes of refugees taking the European Union by storm – and the very strange EU administration system, where officials are not accountable for their work.

Yet there is a feeling that nobody has learned a lesson from this. Because this week, without any preliminary consultations, somewhere in the depths of the European Commission a decision was made on the automatic extension of sanctions against Russia (if we turn to issues that are more relevant to us). And, in general, there is a feeling that we are losing Europe. It is getting weaker economically, it cannot cope with the refugee crisis, and, mostly important, it doesn’t really know what it wants.    Europe is turning from a reliable partner that it used to be into a neighbour you never know what to expect from. What are your thoughts on the subject?

Dmitry Medvedev: I have very mixed feelings about what is happening in Europe. Moreover, I feel sorry for many people living in the united Europe. Why? Europe has always been a comfortable environment, a good place to live. We followed its example in developing different areas of our country, and we still have some things to learn from it. But I believe the problem is that unfortunately, the European Union has failed to think its migration policy through. Europe is really not that big. And before throwing open all the doors to people who find themselves in a difficult situation, I believe the Europeans should have thought about protecting the interests of their own citizens. In each country separately or in the united Europe, in general. But in the end, millions of people, bearers of an absolutely different culture, have come to Europe. I am not even talking about the extremists and terrorists that are also going there. They have basically changed the European landscape. There is unrest in Europe, and unfortunately terrible terrorist attacks are taking place. 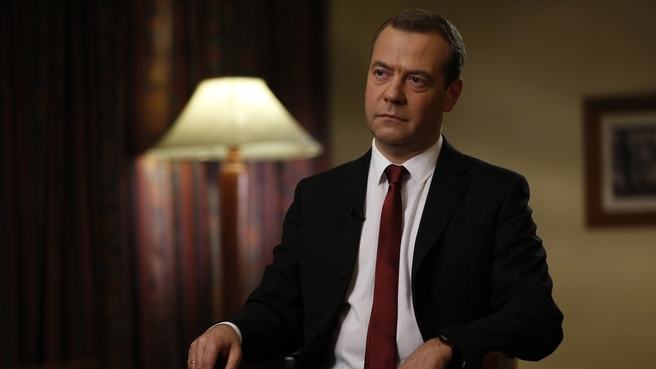 Dmitry Medvedev: Absolutely horrible events. All because of a badly thought out migration policy. I believe that, first, this is a lesson for Europe itself. They have to make some extraordinary decisions to preserve its unity. And we are interested in this. Europe is still our biggest partner. Second, this is a lesson for us. Currently, Russia is a state that strictly protects the interests of its citizens.  Trying to serve them no matter where they are. Making decisions to ensure stability and peace in the country. And, as I see it, we have been successful in that recently. Whereas Europe’s example should serve as a warning to us against badly thought out decisions. We need to preserve all our achievements of the latest period from the standpoint of stability, peace, and inter-ethnic and inter-religious relations. This is an extremely important task for the state.

Sergei Brilyov: The elections are coming up and one cannot but remember that you were the person behind the political system’s liberalisation, as a result of which there is higher competition at these elections than previously. And, in general, you have made life harder and more complicated for United Russia. Do you regret the decisions you made, for instance, about increasing the number of participants in the elections? What are your forecasts regarding the new Duma? Which new political parties do you envision there? What do you think will happen to the two existing leaders?

Dmitry Medvedev: I have no regrets. It was the right decision, which, by the way, was supported by our party and other participants in the political process. The decision was made back then to increase the number of political forces by changing the legislation – more parties emerged – and simplify their participation in the election process. I believe that political competition increased as a result. This is good. This is what many political forces have been urging us to do and talking about – that we need to develop political competition. And United Russia, as the largest party, approved such decisions by supporting my proposals in the State Duma. As to how far we have complicated or simplified the situation for ourselves… I believe that in general the situation is perfectly normal, because the election campaign is underway, and for United Russia it is unfolding in line with absolutely clear laws. And we expect that it will turn out quite favourably for us.

But what I think is important is that we started the process with ourselves when we held an internal vote, i.e. the preliminary vote inside United Russia. We basically told our voters: choose the candidates who you think are best suited to take part in the elections. The people believed us, they came and voted in advance at the party elections. This is very valuable, because our list was fully based on the results of the preliminary elections. In other words, we coordinated our actions with the voters in advance. This allows us to hope for support in the elections to be held on 18 September.

Now let me answer the second part of your question. I believe forecasts are a thankless task and the wrong approach. But obviously, there are certain players who have a good chance to keep their place in the future State Duma. I mean the political parties that are present there because they have strong support of the voters.

Sergei Brilyov: And will there be anyone new?

Dmitry Medvedev: Maybe. It depends on how convincing the other parties’ programmes will be. How convincingly they describe them to the voters. And in general, how trustworthy they will appear to the voters. This is why it will be the people who will decide everything on 18 September.