Presidium meeting of the presidential council on economic modernization and Russia’s innovation development. 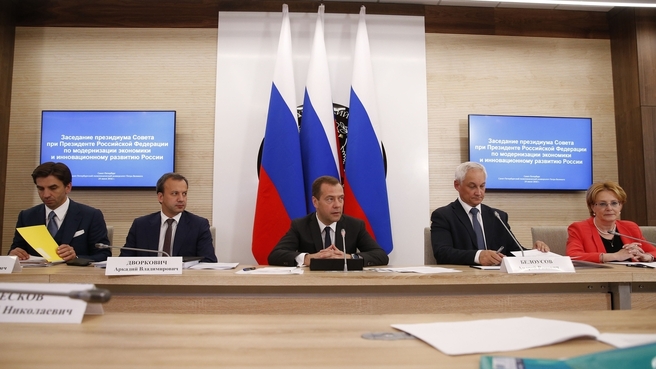 We have been dealing with innovative technologies for many years. We’ve moved forward in some areas, having created the required infrastructure and we’ll continue making progress.

This week I signed off on a concept for the formation of a territorially isolated innovation production centre in Tatarstan. We’ll continue work on this as well. We must pool efforts to this end, in part with our partners in the EurAsEC.

We’ve determined our basic approach toward the development of the National Technological Initiative (NTI). The key instruments here are roadmaps on promoting Russian technology, four of which are already in use: AutoNet, AeroNet, MariNet, and NeuroNet. We agreed on the rules for drafting programmes, selecting and monitoring projects and what form of government support will be used. This year the subsidy for the NTI projects amounts to eight billion roubles.

We’ve been working to enhance the research competences of our universities for several years. Universities are cooperating to create high tech production lines, involve foreign scientists, make full use of the potential of our research community and form modern infrastructure. We’ve allocated and will continue allocating funds for this purpose.

Some universities have already been deeply integrated into an environment of innovative technologies. They have achieved good results and should be involved in the development of sought-after products and technology. They should operate at full capacity. Eventually these products and technology should be commercialised. Universities or companies under their auspices should start making money in cooperation with related or other industrial enterprises. As we can see, the more successful universities are making serious money in this way.