Presentation of the MC-21 short- and mid-range airliner

Dmitry Medvedev visited the Irkut Corporation’s aviation plant in Irkutsk and spoke at the presentation of the MC-21 airliner. 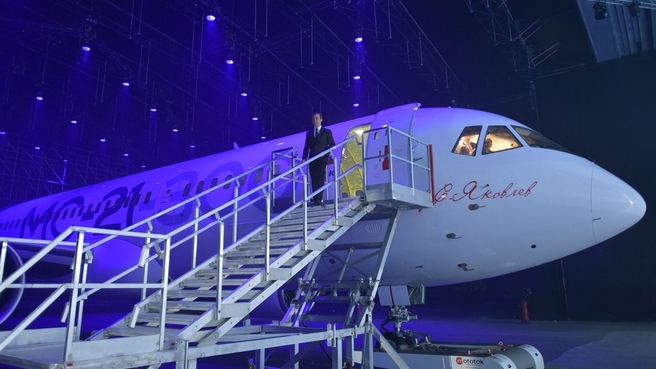 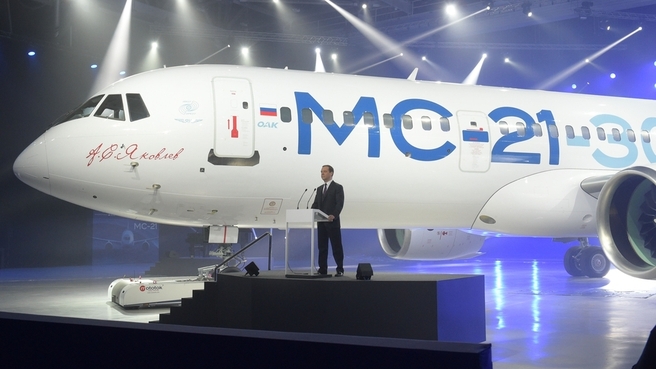 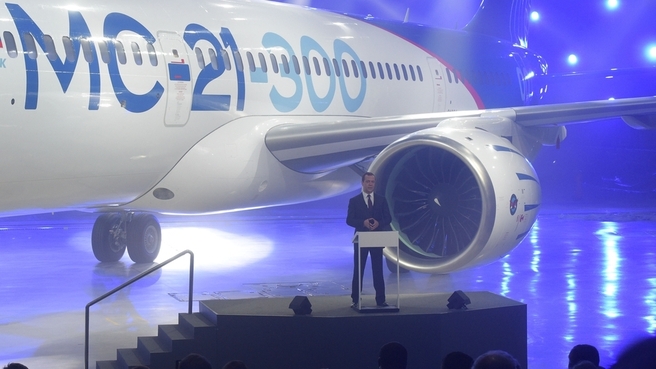 Good afternoon friends. I sincerely congratulate you on this much-anticipated event for our civil aviation, our aircraft manufacturing industry and the country as a whole.

Today we’ve seen the MC-21, a super-modern passenger aircraft of the 21st century, for the first time. We are proud that it was created in our country. This plane is a major achievement by Irkut Corporation scientists, designers, engineers and workers. You are creating – with government support, of course – a modern aircraft manufacturing industry, which is moving our country and its economy forward.

New aircraft manufacturing projects are, obviously, not cheap. In general, few countries have this capability. But they play in the top league, and we must keep our place in it, which is why we have been working for the future, and will continue to upgrade the civil aircraft fleet.

Technologically, the MC-21 is superior to the current planes in this class. I know that it will be one of the best, most efficient and safe planes available. The MC-21 is new evidence of Russia’s ability to create planes that move our aircraft manufacturing industry forward and allow us to compete with other countries.

We have seen some interest in this airliner. Of course, it has just been rolled out, and we still have much to do to help the MC-21 take its place on the global market.

It is also important that the MC-21 project has brought together the best Russian experts and many international companies. We welcome the business leaders who work in Russia, who have come for this presentation and who have achieved impressive results along with our country.

Of course, the project isn’t over yet. There’ll be a series of flight tests. The plane will make its maiden flight next year.

What I want to say is that I’m confident that this airliner will be the pride of Russian civil aviation and that the public, both in Russia and in other countries, will enjoy flying the MC-21.

Congratulations to all those who helped design and manufacture this wonderful plane. You have done a great deal, I would even say, an incredible amount for the country! We will be waiting for this passenger airliner’s maiden flight. Thank you.

The meeting was held in the run-up to the Eurasian Intergovernmental Council meeting and Digital Almaty Forum 2021.
3 February 2021 Prime Minister Mikhail Mishustin congratulates Ulukbek Maripov on his appointment as the Prime Minister of the Kyrgyz Republic
3 February 2021 Mikhail Mishustin signs documents on resuming train services with Belarus, increasing the number of flights to Minsk and restarting air traffic with Azerbaijan and Armenia
1 February 2021 Russia extends UK flight suspension
30 January 2021 Press release by Alexei Overchuk following a meeting of the trilateral working group co-chaired by deputy prime ministers of the Republic of Azerbaijan, Republic of Armenia and Russian Federation
29 January 2021 Change in the algorithm of submitting applications for foreign nationals’ entry into Russia
1
Show More