Meeting of the government Commission on Monitoring Foreign Investment 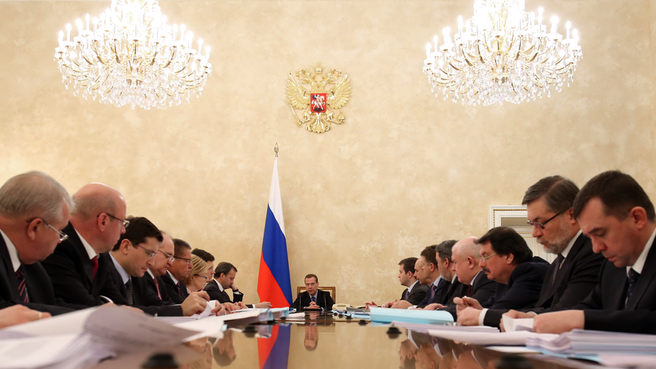 Meeting of the government Commission on Monitoring Foreign Investment

Good afternoon ladies and gentlemen. This is a regular meeting of the Commission on Monitoring Foreign Investment.

I’d like to say first that despite the domestic economic difficulties, certain foreign policy problems, and the escalation of international issues, it is obvious that Russia is still interested in attracting investors, ready to set up business in Russia and develop it on a long-term basis, and manufacture competitive goods not only for the domestic market but also for export. This also applies to industries that are considered strategic under Russian law. Another thing is that they have a special decision-making process and our commission, among others, deals with these matters.

Thanks to a number of prompt decisions to improve the investment climate that were made recently, as you know, there have been some positive changes in the international ratings with respect to doing business in Russia. Of course, not everything is running smoothly yet, but in any event, international institutions see our commitment to improve our procedures. Indeed, they are being modernised.

This is indeed the case with several indicators. We are ahead of many of our neighbours and partners. This is not to say, of course, that we should stop here, because there is still a lot to be done. Nevertheless, in the first half of the year, agriculture, transport, real estate and some other industries have shown an increase in foreign direct investment compared to the same time last year, which is not bad at all under the current circumstances. Investors are willing to invest in a broad range of economic sectors here, and these are not only traditional raw-materials sectors but also transport infrastructure, equipment manufacturing and the pharmaceutical industry.

Incidentally, I recently reviewed the results of this year, noting that the pharmaceutical industry is strong, developing dynamically, as 20 new production facilities were opened over the past year – 20 new drug producing companies. In and of itself, this is of course very good for the country and for our people.

There are local investment deals, small in scope, and there are deals that are part of global processes and global investment with the participation of majors.

Today, we’ll consider applications from foreign investors to buy shares of Russian companies in strategically important sectors in keeping with our commission’s purview. We’ll analyse compliance with Russian law and security standards and will make a decision on each of these proposals.

I won’t announce these proposals, simply because they have yet to be considered. Then, as usual, Igor Artemyev will sum up the results and announce the decisions that the commission has made in various spheres.

Igor Artemyev: Many interesting proposals have been considered.

The state-controlled Chinese company China Petroleum will acquire up to 20 percent of the stock in Sibur Holding, Russia’s major petrochemical company. First, it will acquire a 10-percent stake and, over the next three years, it has a right to buy another 10 percent. This is a total of 20 percent. The Chinese company will pay Sibur $1.338 billion for 10 percent. It’s the largest deal among those that the government commission approved today.

Another major deal that was approved is the global acquisition of Baker Hughes Incorporated by Halliburton Company. These companies specialise in drilling and geological prospecting. Under the deal, Halliburton will acquire Baker Hughes Russia, a unit of the US company. It will also acquire Orenburgneftegeofizika, a company involved in drilling operations. The deal will be clinched in the near future.

The next deal is also important: Nasim Bahr Kish, a private Iranian company, will acquire a controlling stake in Solyanka Port in the Astrakhan Region, a Caspian Sea port. This proposal has a long history. It was made long ago, but today all issues have been finalised and the commission has issued official permission.

It is worth about 750 million roubles.

These are the four largest deals.

Question: Has the proposal involving the acquisition of a 9.9-percent stake in Yamal SPG by the Silk Road Foundation been considered?

Igor Artemyev: Yesterday, the Government approved the proposal but it has certain specifics. Russian law with regard to state-controlled foreign companies stipulates that they may not acquire more than 25 percent of the stock. To change the situation, an international agreement needs to be ratified. Yesterday, the Government made the relevant decision in support of this move. The Government will shortly submit these documents to the State Duma. We hope the State Duma will ratify the agreement. Then the deal can go ahead.

Question: Was any consideration given to the course of action taken by the commission or the FAS in case there are applications from Turkish companies to acquire certain assets in Russia?

Igor Artemyev: I believe the commission will certainly take the political factor into account.