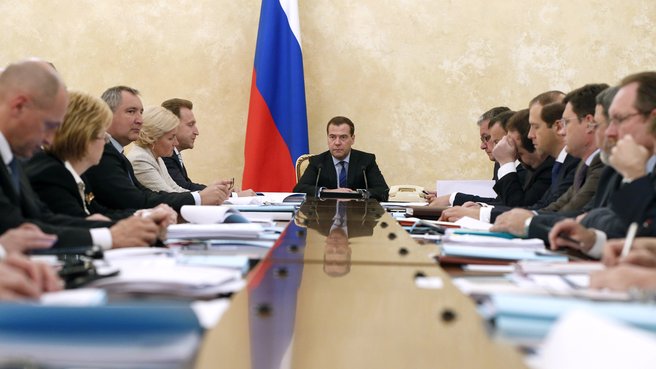 Today we are holding a meeting of the Government Commission on Monitoring Foreign Investment. As usual, we will review a number of applications and take coordinated decisions after listening to the opinions of federal agencies present at this meeting.

The applications concern various economic sectors, including water resources, oil and gas, pharmaceutical products and so on – in short, we will discuss what actions to take in a variety of areas of work. I believe, in general, that the purpose of the commission is precisely to create the necessary conditions for investment in our country, with due account of the national interests, on the one hand, and contributing to a favourable investment climate, on the other hand.

Let's get down to work.

Igor Artemyev: The meeting of the Commission was chaired by Russian Prime Minister Dmitry Medvedev. Today we addressed quite a lot of issues, and I would like to tell you about some of them.

First, this summer we will complete the preparations for the second reading in the State Duma of amendments to Law No. 57, which regulates the work of the Commission. The draft law, adopted by the State Duma in the first reading, already contains many changes. A number of additional amendments will be presented for the second reading, which will be completed in August.

There were many discussions at today’s meeting related to legislative activity. In particular, the above-mentioned draft law contains mandatory requirements on providing information about final beneficiaries, i.e. the disclosure of offshore companies and so on. This also includes the expansion of Law No. 57 on deals involving property of strategic enterprises. As you know, the Government Commission is expanding its influence on stock deals. This also refers to property that makes an enterprise strategic.

In addition, appropriate amendments are likely to be introduced based on state and judicial practices, in particular, a norm according to which an enterprise will qualify as controlled by a foreign investor if the total share of two foreign shareholders exceeds the total share of Russian shareholders. Such a difficult situation arose, for example, in the famous dispute with VimpelCom.

Furthermore, a few deals were approved today related to interaction with major net foreign investors, who purchase our strategic enterprises. I would like to focus on two deals.

The Germany company Fresenius, a major and well-known pharmaceutical company, is purchasing from Sistema JSFC and other shareholders (as you know, Sistema’s major beneficiary is Vladimir Yevtushenko) the companies Binnopharm and Alium, which produce pharmaceuticals and substances developed in Russia, for example, Combivir for treating HIV, Salbutamol for treatment of asthma and Erythropoietin for treating anaemia. This is a major deal.

As a result of these stock deals, Fresenius will receive 100 percent of our strategist’s capital. This is a good example of investing major European capital in the Russian pharmaceutical industry.

Another deal will be concluded with the Austrian company Palfinger, which manufactures hydraulic loading and unloading equipment and ranks among the leaders in this industry. It is buying the Russian company Velmash, which is located in Velikiye Luki and also manufactures hydraulic loading and unloading equipment. Such equipment can be used in a variety of fields. The Government Commission has also supported this deal.

This engineering complex shows that major investors – Austrian investors, in this instance – are buying up Russian enterprises. They come with big money and new technology, which is a benefit for Velikiye Luki, for the entire Pskov Region and in general, for all of Russia.

That was the main thing I wanted to tell you about.

Question: What transactions are underway in the oil and gas industry?

Igor Artemyev: The EuroChem is purchasing Astrakhan Oil and Gas Company. This deal has just been approved. Russian tycoon Andrei Melnichenko is the main beneficiary, while foreign investors hold minority stakes. The commission has approved the transaction because it came through offshores and trusts whose foreign stockholders can maintain control over the relevant company, to a considerable extent.

Igor Artemyev: In the end, Palfinger is purchasing 60 percent. They have attracted another major German-based company, Steindl, named after its proprietor family, which will get 20 percent, while the remaining 20 percent will go to PMHJ Holding Global Ltd. So Velmash will become an entirely foreign company.

Question: Have you considered US-based Abbott Laboratories’ claim for Veropharm?

Igor Artemyev: Yes, the commission has held positive discussions about this, and has decided to reconsider the deal at its next meeting. In other words, the deal has been postponed because Abbott Laboratories filed in its official application and relevant documents only recently. In fact, prospects for this deal have been discussed for quite a long time.

As you know, Abbott Laboratories wanted to acquire Russia’s Petrovax vaccine manufacturer, but the government commission refused to authorise the transaction because vaccine manufacturing is a national industry in practically all countries. So Abbott Laboratories’ actions are understandable, as it did not make an official bid before it could be sure – at least to an extent – that the bid would not be turned down. Abbott was understandably uneasy about it, and was a bit too late. When the bidder filed the papers, we saw it wasn’t a complete package, and the government commission inquired about the missing papers.

I repeat, despite the favourable discussion, the commission could not ultimately approve the deal today. There is much yet to be done together with Abbott Laboratories in a friendly dialogue, and I think the transaction will be a success when we are through with all formalities.

Question: When will this be?

Igor Artemyev: As you know, the meetings of the Government Commission on Foreign Investment in Russian Strategic Companies are convened by Prime Minister Dmitry Medvedev usually once per quarter. So we will most probably come back to the matter in autumn. We will consider everything and discuss it with all relevant offices, considering all the details. I think the transaction has good prospects.

The agenda: the draft federal budget and draft budgets of state extra-budgetary funds, the socioeconomic development forecast, the guidelines for the unified state credit and fiscal policy for 2023 and the 2024-2025 planning period.
21 September 2022 Alexei Overchuk's working meeting with First Deputy Prime Minister of the Republic of Belarus Nikolai Snopkov
20 September 2022 Meeting of the Government Commission on Budgetary Planning for the Upcoming Fiscal Year and Planning Period

Deputy Prime Minister – Minister of Industry and Trade Denis Manturov held a working meeting with Prime Minister of the Donetsk People’s Republic Vitaly Khotsenko. Participants in the meeting discussed decisions on certain issues connected with the republic’s industrial development.
14 September 2022 Meeting on the federal budget for 2023 and the planning period of 2024 and 2025

Mikhail Mishustin: “We have the resources to put us back on the path of sustained growth after a certain adaptation period. To do so, we need to make sure that every rouble from the budget is spent effectively. Let met reiterate that we must and we will deliver on all our social commitments.”
13 September 2022 Strategic session on software import substitution in various sectors

Mikhail Mishustin: “The President has instructed us to ensure technological independence from the foreign software that is currently in use and to promote demand for Russian products. This is very important in conditions of external pressure.”
12 September 2022 Briefing with deputy prime ministers on current issues

The agenda: Additional support for economic sectors under sanctions, the results of the Eastern Economic Forum, the implementation progress of the Far Eastern Quarter project, and the updated Strategy for the Development of Agriculture and Fisheries for the period up to 2030.
9 September 2022 Denis Manturov meets with a delegation from Tajikistan
8 September 2022 Denis Manturov meets with Serbian Government Minister Nenad Popovic

The Prime Minister spoke at the forum’s plenary session, Financial Sovereignty of Russia: Myth or Reality.
8 September 2022 Interview with Mikhail Mishustin on the occasion of the 220th anniversary of the Finance Ministry