Excerpts from Dmitry Medvedev's opening remarks at the Government meeting. 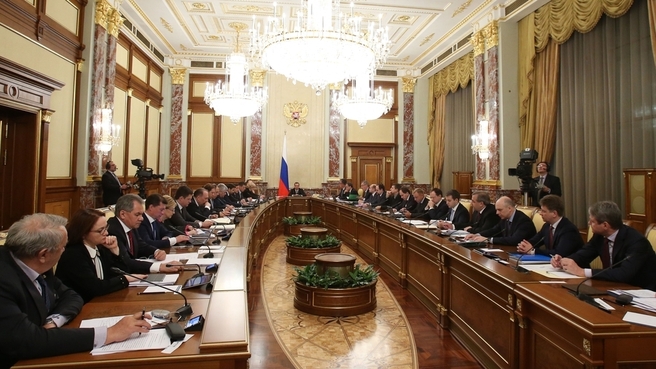 The draft of the Federal Space Programme under discussion today covers the ten-year period from 2016 to 2025. As the Government moves towards approving this document, the considerable experience accumulated in this area is worth mentioning. This year Russia and the whole world will celebrate anniversaries of a number of milestone achievements in space exploration. On 12 April, we will mark 55 years since the first space flight, and 31 March will be the 50th anniversary of the launch from the Baikonur Space Centre of the Luna-10 unmanned space station, the first artificial satellite of the Moon.

On 14 March, a mission to Mars, called ExoMars 2016, was launched. This is a joint project to study Mars led by the European Space Agency and Russia. There are also other examples of new technologies and solutions they provide.

We need to further develop the group of orbital satellites used for communications, TV and radio broadcasting purposes. They fulfil a specific mission, which is to ensure Russia’s information independence. By 2025, the group is expected to reach 73 satellites, up from less than 50.

The number of unmanned and manned spacecraft on near-Earth orbits will also be expanded to satisfy the minimum requirements of Russia’s planned space exploration efforts.

The construction of the Russian Orbital Segment of the International Space Station will be completed with a view of using the station for quite a protracted period.

At the Vostochny Space Launch Centre a facility for heavy-lift launch vehicles is under construction to be used for launching unmanned spacecraft. By 2023, the infrastructure will be in place for launching manned space flights.

These are just a few of the objectives stipulated in the Federal Space Programme.