The agenda: support for the social development of the Arctic regions, awarding the winners in the nationwide Best Municipal Practice competition, on the implementation of the state programme for the effective use of agricultural land in circulation and land-reclamation development. 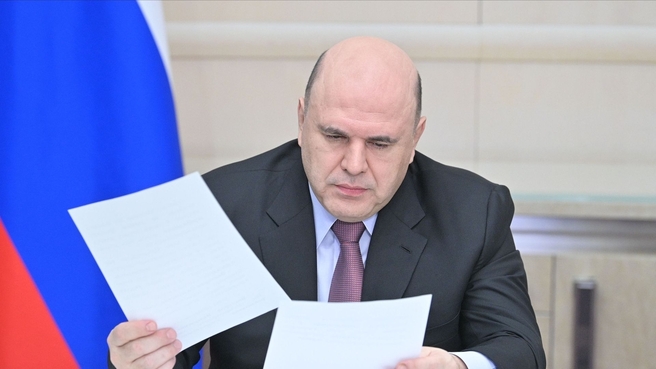 The Government continues to support the development of the Arctic regions. The President emphasised that our priority is resolving socioeconomic and infrastructure problems. A directive was signed to distribute over 2.6 billion roubles among four Russian regions – the Republic of Komi, the Chukotka Autonomous Area, and the Arkhangelsk and Murmansk regions. The funds will be spent on building and repairing education, sports and cultural facilities, purchasing buses, ambulances and medical equipment, as well as on upgrading roads.

These funds are being allocated as part of the Single Subsidy programme, specifically developed under the President’s instruction to finance the social development of economic growth centres. For over four years this programme has been operating in the Far Eastern regions and has had a positive effect on the situation in the regions. This was discussed in detail during a working trip to the Trans-Baikal Territory this year. With the help of these subsidies, kindergartens, schools, hospitals, first-aid stations, and sports grounds – hundreds of facilities needed by people – have already been built. It is important to do everything necessary so that the people living in such a harsh climate can receive a good education and quality medical care and have the opportunity to spend their free time in interesting and useful ways like attending cultural events and playing sports.

Another thing with regard to assisting regions.

The Best Municipal Practices national competition was one of the effective tools in this area.

This competition presented successful projects already implemented that addresses issues that are important to people, and in a variety of areas from financial management and updating housing and communal infrastructure to creating conditions for the development of volunteer movements, holding sports and cultural events, and a number of other areas.

The President emphasised that it was necessary to use these positive practices across the country encouraging the best municipalities.

This year the competition is being held for the sixth time. The Government will distribute cash prizes among 48 municipalities. They represent 28 regions from all federal districts. We will allocate 900 million roubles for these purposes. We hope this will improve the quality of life for people and will become a good incentive for other municipalities to more actively seek and propose effective projects.

Now we will discuss what is being done for the further development of the agriculture complex.

This is one of the most successful sectors of our economy, where we see new records almost every year, such as the significant grain harvest this autumn: more than 150 million tonnes. Work is underway in seed production, breeding, and genetics; and the level of technological equipment is increasing. More and more domestic food products are appearing not only in the domestic market, but also abroad.

As the President noted recently, we cover our needs and are among the leading global food producers. In order to maintain a leading position, it is important to use all available resources, especially our farmland. That is why the Government supported the launch of a special state programme. It was launched this year.

It includes the maximum use of farmland in turnover in the next eight years. This is more than 13 million hectares. Also, work on land reclamation has begun on a systematic basis, soil degradation is being combated, hydraulic infrastructure is being renovated, and other measures are being taken.

This year, over 25 billion roubles have been allocated for the implementation of the state programme. The necessary state support will be provided next year, too. The budget includes over 38 billion roubles for these goals. Last Thursday, this document was adopted at the State Duma. We hope the representatives of the regions will support our initiatives at the Federation Council, too. Ms Abramchenko (addressing Viktoria Abramchenko), please tell us how the state programme is proceeding. Have you already started returning land for turnover?

Indeed, agrarians see farmland as a basic production asset. We are accomplishing several tasks in this connection. First, we need to ensure the cost-effective use of available farmland, including land reclamation projects and efforts to boost soil fertility.

Second, we will reuse abandoned land to carry out real, living agricultural projects.

Third, we need to record the quantitative and qualitative specifications of land digitally and compare the data to Federal Registration Service records. This is what we did last year. And what did we accomplish? First, we could start reusing almost 79,000 hectares of land in 62 Russian regions, including 15,000 hectares for export-oriented crops, like grain and oil-yielding plants.

Second, we reclaimed 35,000 hectares in seven regions that would have been written off due to natural causes. We built and launched 15 land reclamation centres for this.

We will open five more centres before the year is out, and this will help retain almost 8,000 hectares of farmland.

Third, we cleared land reclamation canals and saved over 209,000 hectares of farmland from inundation.

Expanded output and increased exports directly depend on these measures. By late 2022, land reclamation projects will help us preserve and reuse about 400,000 hectares of farmland. This will result in at least 2 million more tonnes of agricultural output by late 2023.

Under the second package of measures, we moved to reuse over 15,000 hectares of abandoned land. Farms in nine Russian regions received this land. Siberia and the Far East are the most active districts. Farmers in the Trans-Baikal Territory and the Tomsk Region received more land than others (5,500 and over 3,000 hectares, respectively).

Land plots with a total area of about 81,000 hectares in 22 regions have been recorded and can be allotted to farmers at any time.

Regarding the third group of measures, we have created digital maps for six regions: the republics of Tatarstan and Mordovia, the Udmurt Republic, and the Belgorod, Moscow and Kaliningrad regions.

So, we now have complete information on the boundaries of almost 12 million hectares of farmland. This work showed that the Joint State Real Estate Register contained no data on 2,000 hectares of farmland. These lands were being used without the required statutory documents. Unfortunately, many municipalities were not very happy about this proposed digitalisation and transparency for just that reason.

Next year, we are planning to create digital maps for almost 39 million hectares of land in at least 13 regions, including the republics of Adygea, Altai, Bashkortostan and Ingushetia, the Krasnodar, Stavropol and Khabarovsk Territories, and the Amur, Voronezh, Kaluga, Leningrad, Samara and Tambov regions.

Mikhail Mishustin: Ms Abramchenko, it is important to ensure that this land is also available to small entrepreneurs.

Land suitable for agriculture should not go to waste. People who are ready to engage in agribusiness should be able to use it quickly: that is, the use of their land title. The government has already proposed amendments to the current legislation in this regard. Starting next year it will be possible to lease land for farming without bidding. This is important.

Ms Abramchenko, what other changes to the regulatory framework for agricultural land are coming? I know you are pursuing this.

You mentioned one of them. As of January 1, 2023, local farmers will be able to lease agricultural land without bidding, for up to five years. This is important for small businesses.

The third decision is related to the creation of a digital register for agricultural land. The relevant law has already entered into force.

By the end of the year, two more bills will be passed, which are already being considered by the State Duma.

One is to eliminate loopholes for unscrupulous owners who do not use agricultural land for a long time. We have eliminated the possibility of reselling such land plots to evade liability.

The second bill aims to put unclaimed land shares into circulation. This problem is more than 20 years old and it began when the collective farms were reformed.

Under this draft law, unclaimed land shares will finally be able to be legally leased, and, as of 1 January 2025, they will be deemed municipal property. This law will return more than 11 million hectares of land to agricultural production.

Mikhail Mishustin: I ask you to monitor the implementation of the state programme. These planned activities should be carried out on schedule and in full to ensure the comprehensive development of our country's agro-industrial complex.