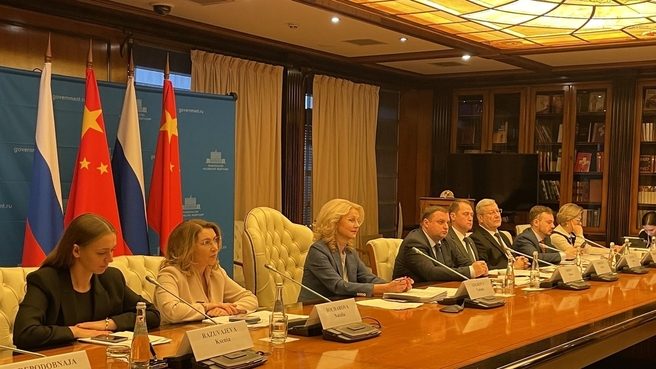 The 23rd meeting of the Russian-Chinese Commission for Humanitarian Cooperation, led by Tatyana Golikova and Sun Chunlan, Vice-Premier of the Chinese State Council, took place via videoconference

On 22 November 2022, the 23rd meeting of the Russian-Chinese Commission for Humanitarian Cooperation, led by Russian Deputy Prime Minister Tatyana Golikova and Sun Chunlan, Vice-Premier of the State Council of the People's Republic of China, took place via videoconference.

The meeting participants exchanged opinions on the current state of and prospects for the development of cooperation in all humanitarian areas. Following the meeting, a series of joint decisions was made that were outlined in the commission’s protocol.

In her welcome remarks, Tatyana Golikova emphasised that the strengthening and development of relations of comprehensive partnership and strategic interaction with China is an absolute priority of Russia’s foreign policy. She expressed confidence in the concurrence of the basic interests and deep mutual trust between the peoples of our countries that lie in the foundation of bilateral cooperation. This is proven today against the backdrop of global transformation.

The parties summarised the results of the joint work over the past year, outlined objectives related to the restoration of the pre-pandemic dynamics of humanitarian contacts and the key areas for further development. The parties expressed satisfaction with the results of the efforts taken to preserve the high level of interaction amid a difficult epidemiological situation in the world and closed borders. Due to the introduction and wide use of new remote formats, cooperation in education, cinematography, sport, the media, archive-management and youth policy were not suspended.

“Last year, the Years of Russian-Chinese Scientific, Technical and Innovation Cooperation were successfully held. This year, a new interstate project – the Years of Cooperation on Physical Fitness and Sports – was launched. I am sure that these will make it possible to involve more people – healthy lifestyle and sports enthusiasts – in the orbit of bilateral humanitarian ties,” said Tatyana Golikova.

According to Golikova, the two countries also continue to cooperate in education. The Government of the Russian Federation allocated 940 grants for citizens of the People's Republic of China to study at Russian universities for the 2022/23 academic year, and that quota was increased to 1,000 grants for the 2023/24 academic year. Interuniversity cooperation is being developed at Moscow State University and Shenzhen Polytechnic. In total, 17 Russian-Chinese joint education institutions operate at Chinese universities. On an ongoing basis, Russia and China exchange experience in infectious diseases, continue to cooperate in developing vaccines against COVID-19, and systematically improve cooperation on ensuring the sanitary and epidemiological well-being of the population.

Medical care for cancer patients remains one of the cooperation priorities in the healthcare sector. “Interaction is also developing in new areas: a decision was made to cooperate on counteracting the spread of HIV, psychiatry, including reducing the negative impact of pandemics and emergencies on the mental health of the people, and preventing addictions,” Tatyana Golikova said.

The development of Russian-Chinese cultural cooperation plays an invariably important role in strengthening strategic partnership. “After the pandemic-related break, the Ministry of Culture of the Russian Federation and the Ministry of Culture and Tourism of the People's Republic of China resumed the practice of holding cultural exchange festivals, which have already received the status of branded projects. In 2021, the Festival of Chinese Culture in Russia was successfully held online. In November-December 2022, Rosconcert, together with the State Concert of China, will also hold a reciprocal Festival of Russian Culture in China online,” the Deputy Prime Minister emphasised. The unique flagship event is the Russian-Chinese Fair of Culture and Art, which takes place on both banks of the Amur River – in the cities of Blagoveshchensk and Heihe.

Russian-Chinese cooperation in filmmaking is forging ahead. Following the successful collaboration between the Russian Film Festival and the Beijing International Film Festival in 2021, this year the Russian Film Festival took place in China for the second time. A total of 17 contemporary Russian films were shown online as part of the screenings between 26 September and 15 October 2022. Animated films were also included in the festival programme as one of the most popular Russian genres in Asia.

Work is underway to expand mutual exchanges and contacts between the youth and youth organisations. On 25 April 2022, the Russian-Chinese Youth Forum took place in Moscow, bringing together over 300 young persons from the two countries. A Memorandum of Understanding and Cooperation was signed between the Association of Students and Student Unions in Russia and the Union of Chinese Students.

Ahead of the upcoming 27th regular meeting of the Russian and Chinese heads of government, the parties expressed confidence that the outcome of the commission’s session will greatly contribute to the meeting and play a positive role in bolstering Russia-China humanitarian ties.

The meeting resulted in the signing of the following documents:

– the Memorandum of Cooperation in Emergency Medicine between the Ministry of Healthcare of the Russian Federation and the National Health Commission of the People’s Republic of China;