The fourth meeting of the Russia-China Intergovernmental Commission on Cooperation and Development of the Far East and Baikal Region of Russia and of Northeast China took place via videoconference. 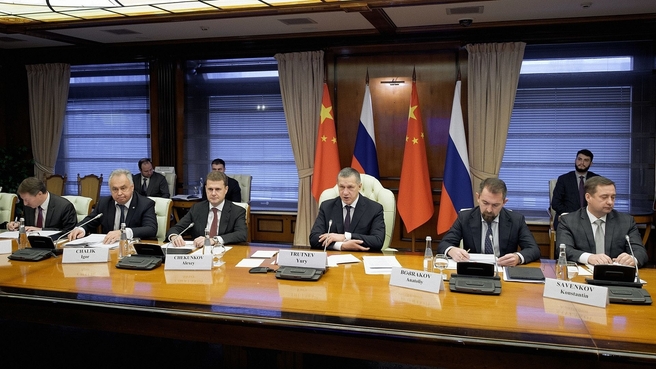 Russian Deputy Prime Minister and Presidential Plenipotentiary Envoy to the Far Eastern Federal District Yury Trutnev and Vice Premier of the State Council of the People’s Republic of China Hu Chunhua chaired via videoconference the fourth meeting of the Russia-China Intergovernmental Commission on Cooperation and Development of the Far East and Baikal Region of Russia and of Northeast China.

“Russian-Chinese relations of all-round partnership and strategic interaction continue to develop dynamically in all areas. China is Russia’s main economic partner in the Far East. In 2021, trade between Far Eastern regions and the PRC increased by almost 30 percent. In January-August 2022, it rose by 45.5 percent, to reach $12.1 billion,” Trutnev said, while opening the meeting.

“Our current task is to implement the agreements reached by our countries’ leaders and develop a plan of further cooperation between the Russian Far East and China’s Northeast, and thus prepare for the 27th regular meeting of the heads of government of Russia and China. Through joint efforts at the previous meeting of the co-chairs, our parties overcame many barriers and achieved good progress in cooperation,” Hu Chunhua said. 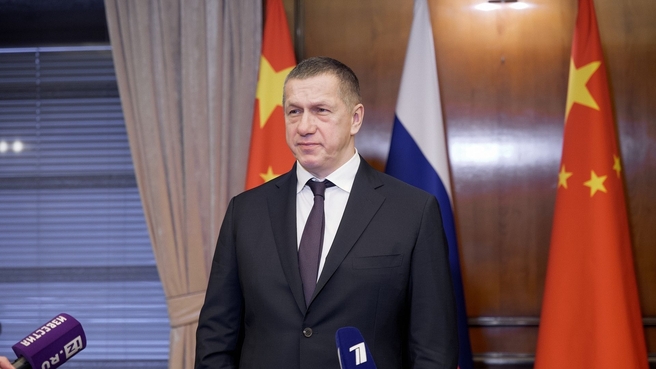 The meeting participants discussed the interaction between Russia and China in the Far East. In particular, 53 projects with a total investment of $13.2 billion are being implemented in priority development areas and in the free port of Vladivostok involving Chinese capital. These are projects in industry, agriculture, construction, transport and logistics. “I believe that we have the opportunity to develop our cooperation even further. There are currently 2,760 projects with a total investment of $107.6 billion being implemented in the Far East using state support measures,” said Yury Trutnev.

The Russian Deputy Prime Minister spoke about the work to improve preferential treatment in the Far East and about President of Russia Vladimir Putin’s instructions to ensure the best conditions for doing business in Russia and in the Far East, and to create a special environment for international investors from friendly countries – an international priority development area.

The Russian Government is preparing a relevant draft law. “We plan to create special preferential conditions for investors in the new area. We will gladly continue this work together. If Chinese companies have proposals regarding necessary conditions for ensuring reliable and secure work, we are ready to consider them,” he added. 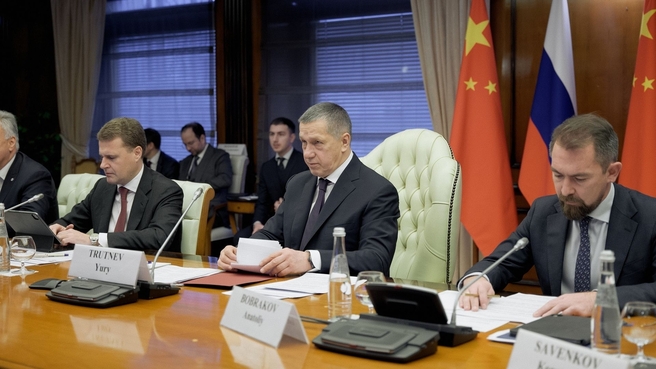 Bilateral relations are further promoted through the development of transport infrastructure, including the two new cross-border bridges linking Russia and China. In June 2022, traffic was opened on the Blagoveshchensk-Heihe road bridge. This will help increase trade to approximately 1 million tonnes of cargo per year. On the eve of the fourth meeting of the Russia-China Intergovernmental Commission, the Nizhneleninskoye-Tongjiang railway bridge was opened. Initially, the estimated cargo volume will reach 5.2 million tonnes a year, with a further increase to 20 million tonnes per year. “The development of cross-border infrastructure is very important for us. Two cross-border bridges between Russia and China have been put into service, and now we need to increase traffic volumes on them,” Yury Trutnev said.

Deputy Minister of Transport Igor Chalik expressed his gratitude to China for the positive consideration of Russia’s request to increase the number of regular passenger flights between Russia and China from four to five every week, including the Avrora Airline flights on the Khabarovsk-Harbin-Khabarovsk route (one flight per week), and also presented Russia’s proposal to increase the number of direct flights between cities in the Russian Far East and China.

There are also good prospects for bilateral cooperation in agriculture. Russia is ready to continue increasing exports of agricultural products to the Chinese market and in this regard pays special attention to the Russia-China New Land Grain Corridor project. The key element of the project is the launch of the Trans-Baikal Grain Terminal with a capacity of 8 million tonnes per year, where it will be possible to store and transship portions of the grain crop destined for China. This will significantly expedite cargo forwarding. The terminal is ready and was opened at the last Eastern Economic Forum. 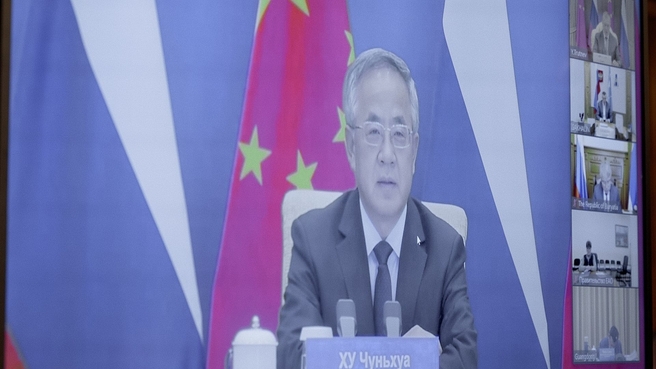 The parties also discussed the efforts of the Business Council of the Far East and Baikal Region of Russia and of Northeast China. The council’s first meeting took place in September on the sidelines of the Eastern Economic Forum. The meeting was attended by more than 130 companies from Russia and China, as well as representatives from government agencies and the expert community of the two countries. Annual meetings of the Business Council can become a platform for bilateral cooperation in the Far East.

A separate point for discussion was region-to-region cooperation between Russia’s Far Eastern regions and the northeastern provinces of China. Vasily Orlov, Governor of the Amur Region, presented proposals for expanding cooperation with Chinese provinces. Orlov said cross-border trade between the Amur region and China almost doubled in the first eight months of 2022 compared to the same period the year before. The increase was facilitated by the transport of goods via the new Blagoveshchensk-Heihe road bridge. At this stage, its capacity is up to 190 freight vehicles per day.

According to Vera Shcherbina, Chair of the Government of Primorye Territory, the region’s foreign trade in 2021 exceeded $10 billion, with China accounting for more than $5 billion of that amount. The trade partners are making a significant number of transactions in roubles and yuans. Trade between Primorye and China grew by 31 percent in January-September of this year. The regional government head proposed taking steps to boost foreign trade even further, such as having checkpoints operate 24 hours a day, facilitating the transit of goods from China to Primorye, increasing the export of high-quality goods from the region to China, as well as resuming the tourism exchange, continuing cultural, scientific, educational and other types of cooperation.

The Governor of the Sakhalin Region, Valery Limarenko, talked about possible cooperation in the implementation of investment projects with China in the Sakhalin Region. Projects in the field of logistics, tourism, oil and gas were presented. Among other things, Chinese companies were invited to take advantage of the preferential tax regime on the Kuril Islands, to invest in tourism and the fishing industry.

The commission members also discussed ways to expand people-to-people cooperation between the regions of the Russian Far East and Northeast China. Last year, Vladivostok hosted the 41st World Amateur Go Championship. Representatives from 77 countries took part in the tournament; the winners represented China. In September 2022, the Chinese team took part in the International Vladivostok Regatta, a major rowing competition held as part of EEF-2022. The Russia- China Cultural Fair international festival holds a special place in the two countries’ humanitarian cooperation. They also have strong ties in education. More than 4,000 students from China study at Far Eastern universities and account for 56 percent of the total number of foreign students.

“The development of trade and economic relations and friendly ties between our countries not only meets our economic interests, but also paves the way for the future transformation of international economic relations. The Russian government is open to dialogue and is ready to support our Chinese partners in the Far East,” Yury Trutnev said, in conclusion.

Other Russian participants included Ambassador Extraordinary and Plenipotentiary of the Russian Federation to China Igor Morgulov, Minister for the Development of the Far East and the Arctic Alexei Chekunkov, Deputy Minister for the Development of the Far East Anatoly Bobrakov, Deputy Minister of Transport Igor Chalik, Ambassador-at-Large of the Russian Foreign Ministry Alexei Yevsikov, heads of Russia’s Far Eastern regions, as well as senior officials from the Far East Development Corporation, the Federal Service for Veterinary and Phytosanitary Supervision, the Federal Agency for Fishery, and the Federal Customs Service of Russia.