The meeting took place on the sidelines of the 2nd Caspian Economic Forum. 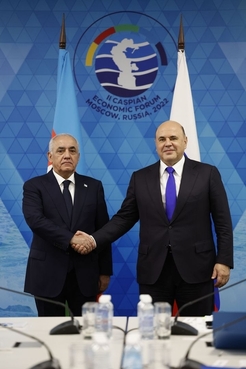 Mikhail Mishustin: Mr Asadov, I am pleased to welcome you in Moscow, in Russia. And I am glad to meet again at the 2nd Caspian Economic Forum.

We met only recently, in late August in Kyrgyzstan on the sidelines of a Eurasian Intergovernmental Council meeting, where the head of the Azerbaijani government participated for the first time as a guest of honour.

Please convey the warmest greetings and best wishes to President of Azerbaijan Ilham Aliyev from President of Russia Vladimir Putin and me personally.

We truly hold dear our friendly relations with Azerbaijan. Our peoples are united by centuries-old history and common cultural values.

On 22 February in Moscow, the presidents of Russia and Azerbaijan signed a declaration on allied cooperation, which brought our cooperation to an even higher level.

In the conditions of illegitimate economic sanctions that unfriendly states have imposed on Russia, the government is taking prompt decisions aimed at further developing Russian-Azerbaijani cooperation. These measures are already yielding positive results, first of all, in trade and economic cooperation.

From January to August, bilateral trade grew by 11.5 percent and exceeded $2.2 billion.

Of course, it is necessary to increase these figures by launching promising new projects, and creating industrial and production chains in energy, transport and agricultural production.

The Intergovernmental Commission for Economic Cooperation is actively addressing these tasks. Alexei Overchuk is leading it on behalf of Russia.

Leading Russian energy, transport, manufacturing and pharmaceutical companies are operating in Azerbaijan. The capacity for developing cooperation in the digital economy, renewable energy and innovative technology is enormous.

In April, a large business mission representing Russian energy companies visited Azerbaijan. A delegation from the agro-industrial complex will go there in the autumn. We will continue the practice of sending Russian business missions to establish direct dialogue with Azerbaijani entrepreneurs and to conclude more mutually beneficial agreements.

We believe unblocking economic and transport ties and creating new infrastructure routes in the South Caucasus, in accordance with what the leaders of Russia, Azerbaijan and Armenia had to say, is of key importance. Moving these important initiatives forward will support the sustainable development of the South Caucasus.

The tripartite working group chaired by our deputy prime ministers scrutinise these issues on an ongoing basis.

Mr Asadov, I am here to discuss with you all bilateral priorities. Please, go ahead.

I fully agree with what you said. As we follow the course outlined by our presidents, Vladimir Putin and Ilham Aliyev, we, the executive authorities of our states represented by the governments, are trying to take action on all the instructions and tasks that have been set before us.

I might repeat some things that you, Mr Mishustin, have already mentioned in your remarks, but I would like to drill down on several issues.

The Russian Federation has always been and remains our important political and economic partner, and we, led by our President, have invariably seen our work with you as a priority and will continue to do so going forward. Russia is our third-largest trade partner, export and import alike. But this has nothing to do with the hierarchy of relations. Just for your information, Italy comes first just because we sell oil to Italy.

You are our number one partner in all other aspects of the economy, including manufacturing and joint projects that are carried out with the help and engagement of Russian investment in Azerbaijan. You listed some, and we discussed them during our restricted-format meeting.

Notably, we have opened a site in the newly liberated territories to build an assembly joint venture with KamAZ truck manufacturer.

Mr Mishustin, the new realities that we are talking about, global realities, are creating huge opportunities in the transport sector which is our top priority as well.

A declaration was signed in Azerbaijan on 9 September. Mr Novak took part in the signing. My deputy, the Azerbaijani co-chair of the intergovernmental commission, Shahin Mustafayev, and his Iranian colleague, the Minister of Roads, were in attendance. We made a decision and signed on the dotted line. The goal is to reach 15 million tonnes by 2030. The working commission from the Russian side and our commission are now available. Mr Mishustin, following this meeting there will be another meeting with our Iranian colleague, and we will ask them (I hope you will join us) to make theirs available, too, so that we can step up our efforts.