Russian-Armenian interregional forums have been held since 2011. The goal is to help identify promising areas of cooperation and expand Russian-Armenian regional ties. The Russian delegation at the forum was led by Deputy Prime Minister Alexei Overchuk. 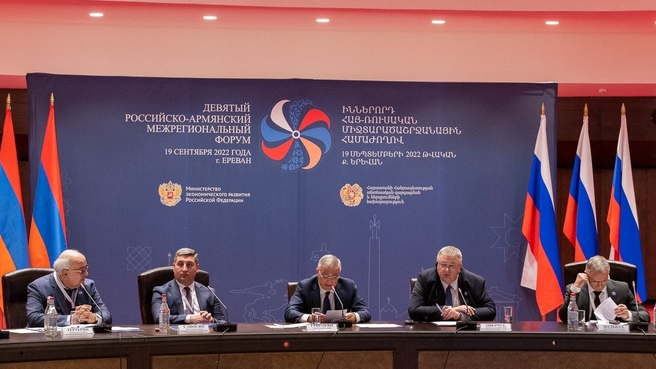 This year, our annual forum is marred by the tragic and horrifying events that took place on the border of the Republic of Armenia with the Republic of Azerbaijan on 13-14 September. I express my heartfelt and deep condolences to the families that lost their loved ones.

To prevent this from happening in the future, it is important to fulfill the agreements reached by the leaders of Armenia, Azerbaijan and Russia on 9 November 2020 and 11 January and 26 November 2021.

We all know the path to peace in the region. It is about unblocking economic and transport links in the region, delimiting the border between Armenia and Azerbaijan and concluding a peace treaty between the two countries. Russia is doing its best to help both sides make progress on this. There is no and cannot be a military alternative to a peaceful solution to this conflict. Russia has always advocated finding a solution on the negotiating and diplomatic path, as well as by way of expanding economic ties between our truly fraternal peoples. From our own experience, we know that only countries with strong economies can meet the variety of challenges.

We are allies. Frequent Russian-Armenian contacts are a hallmark of our high level of alliance, which is particularly important in this year of the 30th anniversary of diplomatic relations.

Productive talks during Prime Minister Nikol Pashinyan’s first official visit to Russia on 19-20 April this year and, most recently, his participation in the Eastern Economic Forum in Vladivostok gave another boost to Moscow-Yerevan interaction.

Foreign trade between the Russian Federation and the Republic of Armenia almost doubled from 2016 to 2021. One should be mindful that this kind of a dynamic development was made possible with the Republic of Armenia’s EAEU membership, which, with Russia’s support, opened new opportunities and new markets for Armenian businesses in the Eurasian space.

From January to July 2022, trade between the Russian Federation and the Republic of Armenia was up by almost 50 percent to $2 billion compared to the same period in 2021. Russia’s exports to Armenia during this period amounted to $1.4 billion, up 40.5 percent. Imports to Russia from Armenia grew by 66.3 percent to a total of $0.6 billion.

We are expanding investment cooperation. The total volume of accumulated Russian investment amounts to almost 40 percent of the total volume of foreign investment in the Armenian economy, which is about $2 billion. More than 40 large Russian companies are operating in Armenia with some of them being major taxpayers here, including Gazprom Armenia, GeoProMining Gold, MTS Armenia, Russian Railways, and Rosatom.

We remain confident that unblocking transport connections in the region, which is part of our leaders’ tripartite agreements, will open up new opportunities for Armenia’s economic growth and spur the inflow of investment. According to our estimates, the opening of railways and motor roads between Armenia and Azerbaijan will bring in about $4.5-5 billion in Russian investment into Armenia. We have an understanding of what these projects could be, and we have been discussing them with our business leaders for quite a while now.

The world is going through dramatic changes. Last week’s Shanghai Cooperation Organisation (SCO) summit meeting was striking evidence of this. We are seeing the emergence of new economic centres and the appearance of new ties reflecting the realities and development vectors of the modern world. Owing to the EAEU, our economies are very well positioned for moving forward and conquering these new markets.

Today, we will see a milestone event for the business communities of our countries – the presentation of the Centre for the Strategic Development of the Republic of Armenia. We started discussing its establishment last year. This centre will consistently promote Armenia’s economic development.

We intend to continue building up Russian-Armenian cooperation in energy, including nuclear energy, the mining industry, transport, logistics and high technology.

We are focused on the development of partnership between Russian and Armenian regional small and medium-sized companies because they largely contribute to the socio-economic stability of the country and they ensure employment. They are drivers of economic growth.

Interregional cooperation is certainly an important aspect of the Russian-Armenian strategic partnership.

This interregional forum is a key venue that allows representatives of state organisations, businesses and the public to compare notes on the entire range of issues of common interest.

Seventy regions in Russia maintain trade and economic ties with Armenia. The most active of these are Moscow, St Petersburg, the Moscow, Rostov, Nizhny Novgorod and Volgograd regions, the republics of North Ossetia-Alania and Tatarstan, and the Krasnodar and Stavropol territories.

We are intensively developing humanitarian cooperation between our countries, which has historically been a driver for the development of the entire range of interstate relations. There are 2,177 students from Armenia studying at Russian universities.

The Days of Armenian Culture were successfully held in Moscow and Kislovodsk as part of celebrating the 30th anniversary of diplomatic relations between the two countries.

Russia is also preparing major reciprocal events to illustrate the high level of bilateral cultural cooperation – the Days of Russian Spiritual Culture in Armenia, the Museum Road Show in Armenia and a concert by the St Petersburg House of Music. I am confident that these events will allow us to exchange the cultural experiences accumulated in the past in promoting museums in the modern cultural space and to present Russian projects.

Colleagues, after the plenary session we will sign an inter-governmental programme on economic cooperation up to 2025, which will create new and favourable conditions for expanding bilateral cooperation in the context of modern conditions and trends. We will also sign a plan of measures to fulfil the inter-governmental programme for developing inter-regional cooperation in 2022-2027. This plan embraces both traditional areas of cooperation – agriculture, culture, trade and the economy, and dynamically developing trends – high technology and the digital transformation.

In conclusion, I would like to thank the organisers and participants of the forum for arranging such an important and worthwhile event at such a crucial time. I am grateful for the wonderful programme and the traditionally friendly atmosphere, for the continuing and new contacts.

10 hours ago Meeting with deputy prime ministers on current issues