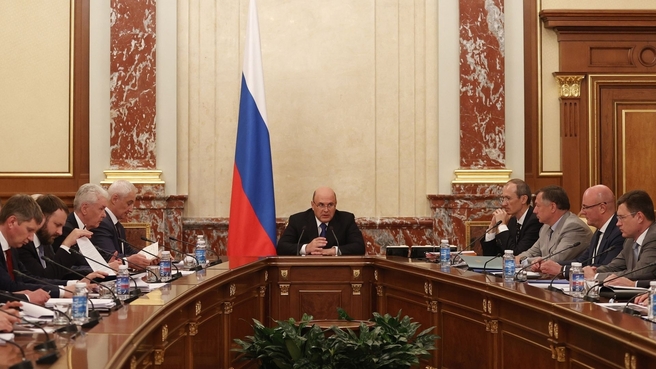 The Government continues to develop solutions for the confident adaptation of our economy. We are taking measures to boost domestic reserves, both in the real economy and in the service industry, and create conditions for the further development of our country and improving people’s wellbeing.

Many resolutions adopted by the commission have been implemented in the last month.

At least 300 measures were included in the priority action plan. Two thirds of them are underway, to the benefit of the economy, business and, subsequently, people in our country. Several measures are being adjusted so we can launch them as soon as possible.

We are already seeing the first results. Despite the unprecedented external pressure, important macroeconomic indices over the past five months have received a boost. We talked about this yesterday at Innoprom. I am referring to gross domestic product, the volume of industrial production, agriculture and freight turnover.

The sanctions are a big challenge, but they offer new opportunities including for our regions. The President spoke about this recently at the St Petersburg International Economic Forum. The Government is focusing on maintaining demand in the economy including the support our citizens receive.

A recent resolution includes payments for children aged 8 to 17 in low-income families. As of 21 June, a total of some 70 billion roubles have been allocated for almost 3.5 million children.

A range of resolutions designed to prevent tensions in the labour market are also being implemented. To this end, the regions will receive almost 40 billion roubles. In particular, employees who are at a risk of being laid off can undergo retraining, additional training and receive other jobs.

Concessional loans are also among the main tools to support enterprises. There are currently 13 programmes aimed at increasing working capital; four of them were launched in June.

New assistance measures were also initiated for large companies – those that have grown from small and medium-sized businesses but are not backbone enterprises. They can receive preferential loans to rebuild working capital and project financing under VEB’s umbrella guarantees. The guarantees total almost 230 billion roubles. I remember at our first meetings, the city of Moscow spoke about this, in particular, and it only took us two months to implement these programmes to such an extent.

One of the leaders is the construction industry. The President instructed us not to slow the pace of housing construction or the issuance of mortgage loans against the backdrop of the sanctions. Our commission approved a range of resolutions.

At the President's initiative, the preferential mortgage rate was reduced to 7 percent. Previously, the maximum loan amount via the soft loan programme was increased to 30 million roubles in Moscow, St Petersburg, the Leningrad Region and the Moscow Region, and to 15 million roubles in other regions. A resolution was signed that will extend these conditions to IT specialists where the subsidised loan amount will remain 18 million and 9 million, respectively. Now it can be combined with financing contracted at market or other subsidised rates.

IT employees aged 22 to 44 working at accredited companies will be able to receive a soft loan at a rate as low as 5 percent per annum, as promised.

A pilot mortgage programme for the construction of private houses was also initiated. Additional funds were allocated for rural mortgages.

here were also other resolutions that helped support demand in the economy as a whole. At the President's instruction, annual deferrals were granted for employee insurance premiums for Q2 and Q3 of this year. Businesses will be able to temporarily release about 1.7 trillion roubles and direct these funds to the emergency reconfiguration of production and logistics. Significant changes have taken place in control and supervision activities.

The Government also developed draft amendments to the Code of Administrative Offences that provide for introducing a moratorium on prosecuting currency legislation violations, if they were due to the sanctions. I know that businesses were interested in this, and many questions and requests were submitted to our commission. We took into account the position of the business community.

Another important area is support for importers. Parallel imports were legalised, which will make it possible to promptly provide both companies and our citizens with needed goods and components.

Import duties on 1,300 types of goods were suspended within the EAEU. A programme on concessional financing of imports was initiated. The first loans have already been issued. Colleagues, we are doing very well, in fact. In general, the measures taken have helped the economy and business adapt to the current conditions. We need to complete the preparations for the necessary legal framework soon so all the resolutions adopted by our commission can be made available.

At the same time, it is important to closely monitor what is happening in various economic sectors, to see if any additional measures are needed to achieve more confident development or to respond to emerging challenges. And if further measures are necessary, we should make appropriate proposals and adapt our strategic sectoral support tools to the new economic situation beyond the scope of the anti-crisis agenda.

The meeting was held on the sidelines of the 2nd Caspian Economic Forum.
6 October 2022 Mikhail Mishustin’s meeting with Prime Minister of Azerbaijan Ali Asadov

The oil-producing countries made a common decision to reduce production by two million barrels per day.
5 October 2022 Mikhail Mishustin at the Russian agro-industrial exhibition Golden Autumn 2022

The Prime Minister spoke at the strategic session, Food Security in Russia and the World, and presented state awards to agricultural workers for their great contribution to the development of agriculture.
3 October 2022 Russia-Belarus talks

The agenda: the draft federal budget and draft budgets of state extra-budgetary funds, the socioeconomic development forecast, the guidelines for the unified state credit and fiscal policy for 2023 and the 2024-2025 planning period.
1
Show More