The meeting took place on the sidelines of a meeting of the Eurasian Intergovernmental Council. 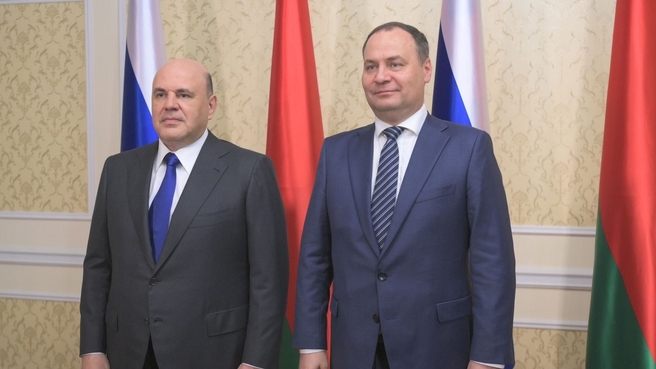 Mikhail Mishustin: Mr Golovchenko, colleagues, I am glad to see you again in Minsk. I always visit Belarus with special friendly feelings. I would like to thank you from the bottom of my heart for your hospitality and the traditionally warm welcome of our entire delegation. It is symbolic that our meeting is taking place ahead of the 30th anniversary of diplomatic relations, to be marked on 25 June. We are also meeting ahead of another very important date for our fraternal peoples – the 81st anniversary of the start of the Great Patriotic War.

I would like to emphasise that we sincerely value our neighbourly and allied relations with Belarus and consider our cooperation very important, and I hope that we will take it to an even higher level. We will build up the integration agenda of the Union State. A reliable basis for this is created by the Guidelines for Implementing the Provisions of the Treaty Establishing the Union State and the 28 union programmes, approved by the Supreme State Council in November last year with the participation of President of the Russian Federation Vladimir Putin and President of Belarus Alexander Lukashenko, which we are implementing with you, Mr Golovchenko.

The governments of Russia and Belarus established systematic work on these allied programmes. Over a third of the 983 events have already been completed. Priority goes to creating a common economic space and deepening cooperation in industry, energy, agriculture, the digital economy, transport and many other sectors.

We greatly appreciate the constructive position of our Belarusian friends on the developments around Ukraine. Together we are resisting the unprecedented sanctions pressure from unfriendly states, comparable to an all-out economic war. Its goal is to cut Russia and Belarus off from the international financial system, slow down our economic development, undermine the technological sovereignty of our countries, and ultimately make life worse for our citizens. I am convinced that we will withstand this pressure, and, as a result, we will become stronger and overcome the consequences of Western sanctions, including through deepening integration in the Union State, launching joint projects, developing new production and logistics chains, and import substitution. It is important that trade and economic cooperation between Russia and Belarus develops successfully. Last year, mutual trade increased by more than 34 percent and amounted to $38.5 billion. The Russian Federation ranks first in terms of accumulated investments in Belarus, which is already more than $4 billion. In the first quarter of this year, capital investment increased by 13 percent. In total, more than 2,500 companies with Russian participation operate in Belarus.

Our direct region-to-region interaction with Belarus also plays a crucial role in developing our trade and economic relations. I believe that the upcoming Forum of [Russian and Belarusian] Regions with President of the Russian Federation Vladimir Putin and President of Belarus Alexander Lukashenko will give a new, deeper impetus to region-to-region cooperation.

Our talks are being held ahead of the Eurasian Intergovernmental Council meeting. Russia and Belarus are actively promoting deeper integration in the Eurasian Economic Union. We make collective decisions aimed at enhancing the economic resilience of the EAEU member countries under sanctions, provide commodity markets with in-demand and competitive products, and protect them from unfavourable external conditions. Today we saw an example of such interaction – the Amkodor enterprise. I think that its work with 120 suppliers, cooperation with over 50 Russian businesses, and generation of demand in our union – all that showcases Amkodor’s amazing example. The new equipment samples – competitive and effective – showed today the efficiency of our joint programmes, among other things.

Mr Golovchenko, I am ready to discuss with you the current issues on the bilateral agenda.

Roman Golovchenko: Thank you, Mr Mishustin. I am happy to welcome you and your colleagues in Belarus.

We have a packed bilateral agenda this year due to the need to resolve urgent issues of supporting our economies under the conditions, as you put it, of unprecedented sanctions pressure. Well, pressure is probably too mild a word, rather poetic. In reality, it is a true economic war against Belarus and Russia. 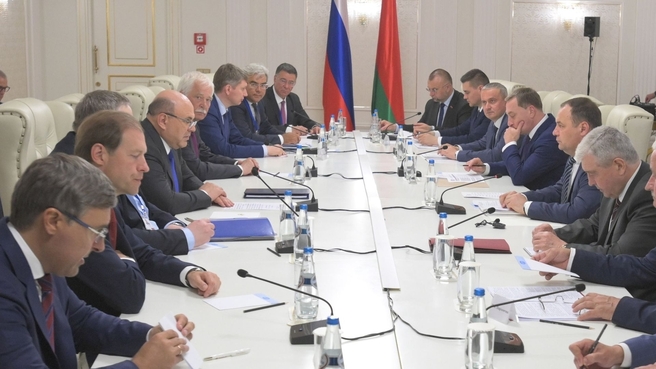 From March through June, that is, in less than four months, the national governments of our countries managed to do a great deal to minimise the pressure, to coordinate joint actions on manufacturing import-substitution products, adjusting the economies to the changed external conditions, saturating the consumer market, and laying out new logistics for the delivery of goods and in general comprehensive measures to support all industries. And those 28 union programmes are certainly a great pillar. I think there will be more of them soon, we are working on that. They actually confirm that the decisions were taken at the perfect time.

We still have a number of mechanisms in place to coordinate these efforts at the ministry and agency level as well as a higher level. They are regular contacts between deputy prime ministers – Alexei Overchuk from one side and Nikolai Snopkov from the other – and a high-level group of the Council of Ministers of the Union State. Their work focuses on promptly resolving emerging problems in bilateral trade, the way we work in tandem within the framework of the five countries.

Whereas in the past years our meetings focused on finding the best solutions in view of maximum consideration of each other’s interests, now coordination and mutual support in overcoming crisis events are coming to the fore.

I would like to express gratitude to you, Mr Mishustin, and members of the Government of the Russian Federation, heads and deputy heads of the federal executive bodies for a constructive, in-depth and careful approach to all the issues, and not only problems, lest there is an impression that all we have been doing was resolving some problematic issues. We also put forward initiatives and, on the whole, carry them out successfully.

At present, the state bodies of Belarus and Russia have drafted a number of proposals that are up for decision at the heads of government level. In some cooperation areas, the work is probably progressing slower than we want and slower than the time demands. Therefore, I think we will also discuss these issues and will take respective decisions. I think that the emerging situation makes it necessary to act quickly, decisively and in a military style. Actually, we are working precisely under such conditions, and we must make decisions under such conditions. This is why I would like to take this opportunity and discuss exactly these type of questions today, the more so that we have all key officials present.