Yury Trutnev: “The Blagoveshchensk-Heihe bridge has special symbolic significance in today’s disunited world. It will become yet another thread of friendship linking the people of Russia and China.” 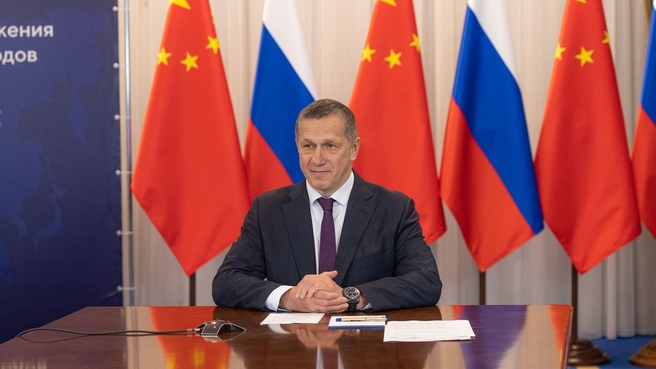 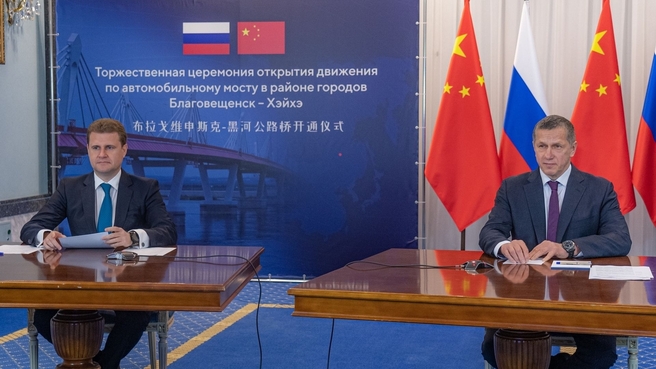 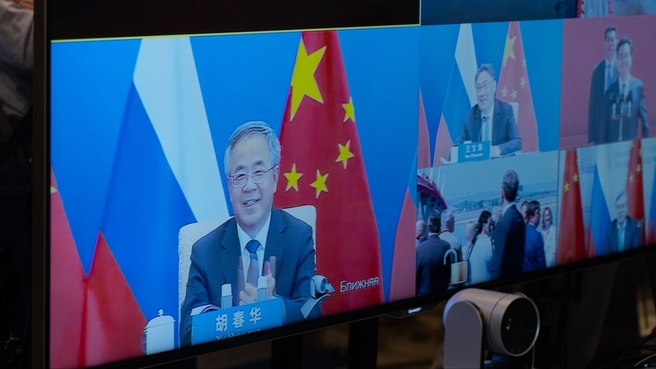 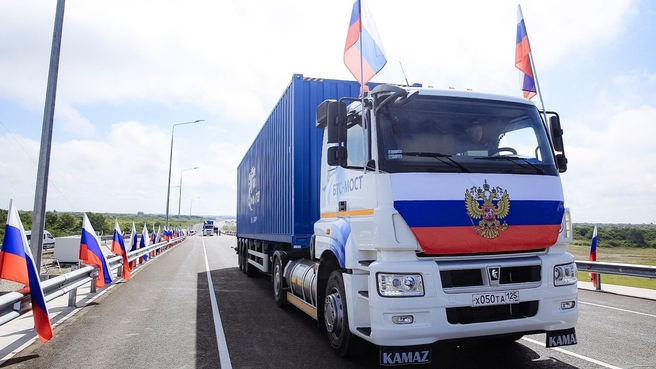 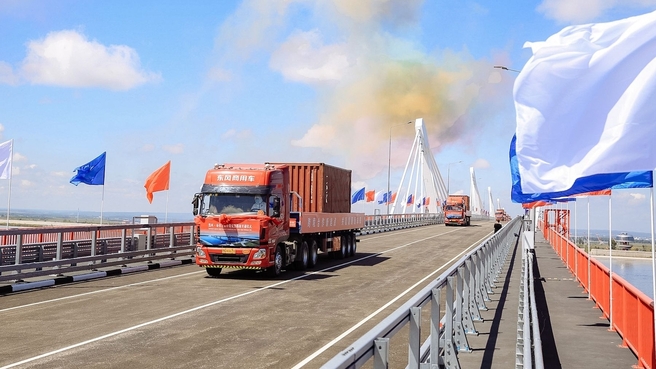 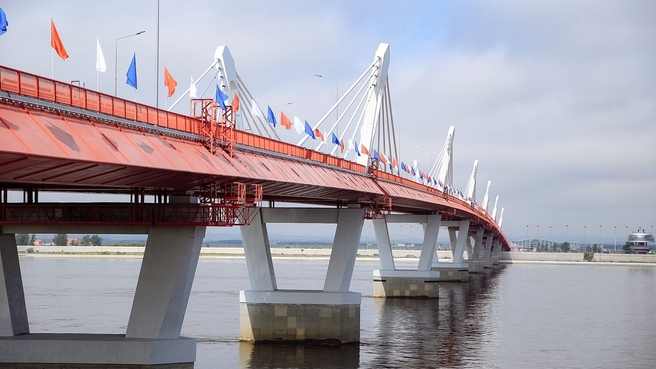 Deputy Prime Minister and Presidential Plenipotentiary to the Far Eastern Federal District Yury Trutnev, Vice Premier of the PRC State Council Hu Chunhua, Minister of Transport Vitaly Savelyev and Minister for the Development of the Russian Far East and Arctic Alexei Chekunkov attended the official ceremony to launch traffic via videoconference. Heilongjiang Province Governor Hua Changsheng and Amur Region Governor Vasily Orlov were present on site on both banks of the Amur River. Other participants in Beijing, Moscow and Vladivostok and on both banks of the Amur River communicated via videoconference.

“The Blagoveshchensk-Heihe bridge has special symbolic significance in today’s disunited world. It will become yet another thread of friendship linking the people of Russia and China. Construction of the bridge was launched in 2016. The construction project involved thousands of people, and work was conducted 24 hours a day in the Russian and Chinese sections. This bridge is quite unique because it was possible to implement this project without budgetary funding and under a concession model. Construction of the Nizhneleninskoye-Tongjiang railway bridge was completed only 45 days ago. By expanding the border infrastructure, we are creating favourable conditions for developing the economy of both countries, for jointly using various advantages, and we are helping improve the life of citizens of the Russian Federation and the People’s Republic of China,” Yury Trutnev said.

Deputy Premier of the PRC State Council Hu Chunhua congratulated those present at the ceremony on behalf of the PRC Government. “This bridge crossing is an important transport infrastructure project, to which the leaders of our states have paid special attention. The opening of the motorway bridge testifies to the readiness and confidence in the further intensification of the entire range of bilateral practical interaction and provides new energy to cooperation between northeastern China and the Russian Far East. The Chinese side is ready, jointly with the Russian side, to use the opportunities afforded by the launch of the bridge, constantly facilitate transport interconnections, and provide higher-quality logistical services for the movement of personnel and the strengthening of trade ties. I am confident that together we will turn the Heihe-Blagoveshchensk bridge into a bridge of friendship, a bridge of cooperation, and a bridge of co-development,” he said.

The cross-border bridge was built based on a unique concession model. In June 2016, Harbin hosted the signing of a contract stipulating that extra-budgetary resources would be used to build the bridge. The sides established a joint Russian-Chinese concession company whose concession grantors were the Government of the Amur Region and the People’s Government of the Heilungjiang Province. According to expert calculations, the project will recoup the invested funds within the next 16 years.

With the construction over, the border bridge crossing has become the property of the Amur Region and the Heilungjiang Province, with the ownership right divided along the line of the Russian-Chinese border.

“The opening of the bridge, which our carriers eagerly awaited, will make it possible to cut the costs and time involved in transporting foreign trade cargo and will drive the development of infrastructure in the border areas of Russia and China. This is an important step forward in promoting and strengthening Russian-Chinese economic cooperation,” Minister of Transport Vitaly Savelyev said.

Construction of the bridge began in December 2016, simultaneously by Russian and Chinese builders. The bridge is 1,080 metres long. Each party (Russia and China) built exactly one half, or 540 metres. The sections were built simultaneously from the two banks and were connected in May 2019. The total length of the bridge pass is around 20 km, including 6 km of the road in China and 13 km of the access road in Russia, where a bridge across the Kanikurganskaya Creek accounts for 278 metres, since the section of the bridge on the Russian side begins on an island separated from the mainland by the creek.

“Today we see a shortage of shipping capacities on railways and in ports. We lack capacities for transporting 70 million tonnes of cargo per year. With the current trade growth trends, the amount of cargo going to the east may double. Therefore, every such project is vitally important. We are considering the possibility of opening additional checkpoints in the Russian Far East. We will be developing bridge access areas and industrial sites for joint production. That will make production cheaper and more effective,” Minister for the Development of the Russian Far East and Arctic Alexei Chekunkov said.

Governor of the Amur Region Vasily Orlov stressed that the bridge across the Amur River will make it possible to take full advantage of the Amur River region’s transit potential. “The opening of the bridge is a historic event. The bridge was ready two years ago, but we had to postpone the opening because of the pandemic. Now we were able to hold the ceremony. The new bridge will substantially contribute to the development of trade and economic links between Russia and China. More than 600 freight vehicles will cross the bridge every day. Modern checkpoints will be able to clear 4 million tonnes of freight and 2 million passengers per year. We will start with freight transport though,” Amur Region Governor Vasily Orlov said.

The first lorries travelled across the cross-border bridge between Russia and China via the Kani-Kurgan – Heihe checkpoint. Eight prime movers from the Gazprom Helium Service LLC vehicle fleet running on environmentally-friendly liquefied natural gas drove into China, and eight other vehicles left China for Russia.

The first freight consignment from the Amur Region to China consisted of local soybean oil and sawn materials. In turn, China delivered vehicle tyres and electrical equipment components. From 11 June, the international bridge will start operating every day from 8 am through 11 pm.

“We will see economic benefits after freight traffic is launched. We assumed that the bridge would recoup itself, while compiling the bridge project’s feasibility study. This is a rare occurrence. The bridge shortens the route by 300 kilometres and thus reduces transport outlays. Many people will be able to use the bridge for delivering freight and for visiting the neighbouring country,” Yury Trutnev noted.

On 8 December 1992, the Government of Russia and the Government of the PRC signed an agreement on international vehicle traffic. Three years later, on 26 June 1995, the governments of both countries signed an agreement on the joint construction of a bridge across the Amur River between Blagoveshchensk and Heihe in the Heilongjiang Province. At that time, the construction project did not get off the ground due to the lack of funding. The project was implemented only because President of Russia Vladimir Putin devoted attention to it.

Until now, the region did not maintain year-round vehicle traffic, due to the lack of proper infrastructure. Ferries and pontoon crossings via the Blagoveshchensk-Heihe and Poyarkovo-Xunke checkpoints remained the only freight and passenger transport option for a long time.