The Commission Presidium held its meeting via videoconference. 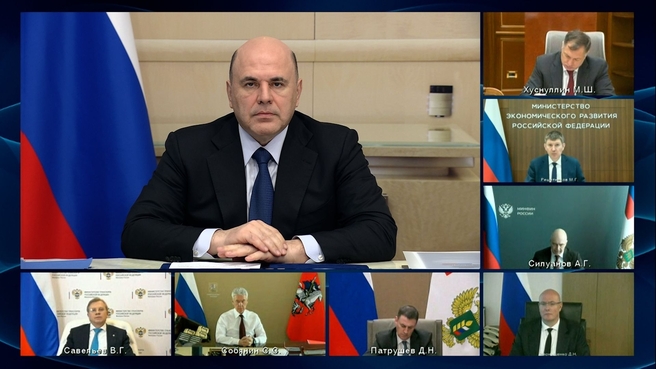 One of them relates to social security contributions. Companies will be entitled to a one-year deferral on their contributions for the second quarter. This measure will benefit companies from all sectors of the economy, except for exporters, the financial and public sectors, as well as wholesalers.

Companies focusing on the domestic market and supplying goods and services to consumers will be able to benefit from this deferral in the third quarter too.

In all, this will free up 1.6 trillion roubles in working capital for companies, enabling them to spend this money on upgrading their manufacturing and logistics capabilities.

We will pay special attention to assisting major corporations to increase their working capital. The same applies to facilitating imports and infrastructure projects by companies which have outgrown the SMEs sector but have yet to become systemically important enterprises.

The President proposed offering them the chance to take part in VEB’s loan guarantee programme, which would enable banks to provide them with more funding. This includes shipping companies, producers of food, medicines, furniture and equipment, as well as IT businesses and other manufacturers serving the domestic market. About 550 billion roubles will go towards loan guarantees.

The third measure concerns subsidised mortgages. In March, we launched a mortgage lending programme at a 12 percent interest rate. It was due to expire in mid-2022. The President instructed us to extend this programme until the end of the year and reduce the interest rate to nine percent. This will enable us to make housing more affordable for Russian families and support the construction sector.

The Government continues to work on other measures as part of the priority action plan. We are drafting the corresponding regulations to this effect.

One of the topics that is of importance to our people is to offer support to water channels supplying fresh water to cities and remove sewage from them. Under the existing regulations, these entities can use only half of the payments they get from their users to deal with the negative effect on the centralised water drainage system.

The proposal consists of lifting this restriction and enabling these companies to use all these payments. This will give them additional funds for upgrades and maintenance, while reducing deficits and covering cash deficiencies. This will prevent any instances where infrastructure repairs are not carried out before the start of the winter and ensure that our people have a reliable and uninterrupted hot and cold-water supply.

On the President’s instructions, experts drafted a proposal aimed at curbing fare rises on public transport.

Today, the law allows carriers to reduce or even discontinue transport operations altogether. Far from all of them are doing this for reasons of necessity such as a drop in the passenger flow. Dishonest companies are abusing their right because overloaded buses are bringing them more profits. In the process, they keep the time allotted to them for stops, actually preventing competition.

This is unfair to passengers, who have to spend more time travelling, often pay too much and have to make several transfers to reach their destination. Let’s limit the ability of carriers to change routes, not to mention cancel them arbitrarily, by post factum notification.

Regional authorities must thoroughly monitor the affordability and quality of public transport services. If these worsen, they should allow other entrepreneurs to enter the market and create new routes. In this way, more people will be able to start a business, with tougher competition to win passengers.

We hope this measure will allow passengers to reach their destinations more quickly and comfortably with fares justified by the real costs of the carriers rather than an artificial shortage of seats on the routes.

We will also support target capital funds, or endowments. The President spoke earlier about the need to encourage their development. They are formed mostly by donations and are aimed at long-term funding of non-profit companies through capital management revenues.

In our country, endowments primarily help universities and schools, theatres and museums. Their funds are substantial. They have managed to accumulate over 40 billion roubles.

In the current conditions, it is suggested that they keep purchased shares, bonds and other assets despite price fluctuations. By law, they would have been obliged to sell a portion of their assets to guarantee the required amount of profit. However, it makes no sense to sell assets at a loss in the low market; these assets are spent on major social and scientific programmes.

Endowments will get the chance to choose: either to fund their projects themselves from their own target capital or freeze such support.

These will be temporary changes for three years. After this time, the requirements for the use of target capital funds will automatically return to what they are now; there will be no need for additional decisions on this issue.

The Government has already made principled decisions on all of these measures. Now it is necessary to draft amendments to laws and regulations.

Today, we will review another set of proposals which includes suggestions aimed at reducing regulatory costs for Russian businesses and non-profit companies, encouraging business and investment activities, supporting small and medium businesses, and taking a number of sectoral measures on transport, construction and trade.