The agenda includes the federal budget execution, the progress in the implementation of Federal Target Programmes and Federal Targeted Investment Programmes over the first nine months of 2021, draft federal laws, and budgetary allocations. 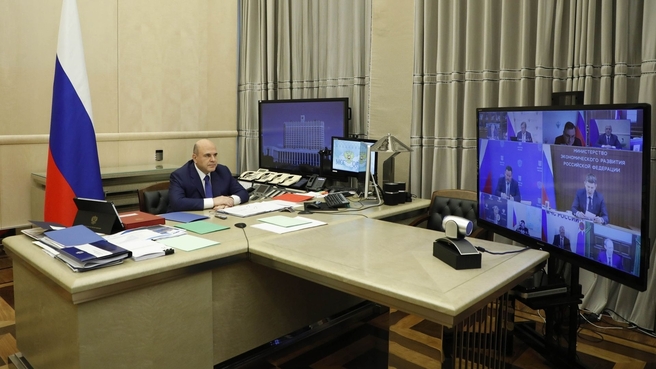 Our agenda today includes the execution of the federal budget in the first nine months of the year. Thanks to citizen and business support packages, which the Government has implemented on the President’s instructions, the Russian economy has returned to the path of sustainable growth. Financial discipline has improved as well, which has had a positive impact on the overall results.

I would like to speak in brief about the main results. We have balanced the budget. We are implementing all our social commitments to citizens. We have fulfilled all the new presidential decisions, primarily with regard to assistance for families with children, and support for small and medium-sized enterprises, which the pandemic has hit especially hard.

This has largely been made possible thanks to the increased budgetary revenues. They have exceeded last year’s figure by more than one-third and almost reached 18 trillion roubles. Cash execution of spending from January to September was close to the target figure. The difference was negligible, even with due regard for additional funding plans. As a result, we can report a budget surplus of over 1.6 trillion roubles.

Today we will also discuss the implementation of federal targeted and investment programmes. Allocations for them have been approved at over 1.13 trillion roubles. Their cash execution has increased as well. It has reached 60 percent for targeted programmes. The figure is even larger for the two programmes that are related to technological development.

The assistance we are providing to the constituent entities of the Russian Federation has influenced the results of our efforts on the federal targeted programmes. The volume of their co-financing from the regional budgets and extra-budgetary sources has increased by over two-thirds.

As for the targeted investment programme, the figures have improved as well. Its cash execution, contracted volumes and the number of construction projects scheduled to be completed have also increased.

Colleagues, these are the results we can report for the first nine months of the year. It is important to keep pace and to improve the efficiency and the smooth spending of the budget and allocations for federal programmes. Our  agenda today also includes social issues.

This year, at the President’s initiative we launched a new measure to support low-income families. Single parents now get a monthly benefit per each child between 8 and 17 years old, which amounts to 5,500 roubles, on average. To be more precise, this benefit is equal to half of the regional subsistence rate per child.

Families with a total of 1.3 million children are currently entitled to these benefits. To ensure that they receive these payments on time, the Government will earmark an additional amount of almost 14 billion roubles, on top of the 36 billion already allocated to this effect. This is an important asset for single moms and dads for raising their children.

The next item on the agenda deals with the performance under the President’s May executive order. In late November, the President held a meeting, which included a detailed discussion on the salaries of public sector employees, including doctors, teachers, university faculty, researchers and cultural workers.

Just a few days ago, I reported to the President on the Government’s readiness to carry out these instructions.

Today, we will be allocating over 12 billion roubles to increase the salaries of public sector employees.

I am asking Minister of Labour and Social Protection Anton Kotyakov to personally oversee the implementation of this decision and, together with the Ministry of Finance, to keep a close eye on this matter in order to make sure that people entitled to these funds receive them across all regions. Their salaries must fully comply with the parameters set forth in the presidential executive order.

The Government’s agenda also includes an important item on implementing the Low-Carbon Development Strategy. It has been approved recently and runs until 2050.

At the President’s instructions, we are now launching a pilot project on Sakhalin to test mechanisms designed to enable us to achieve carbon neutrality. This has to be done within a period of just four years. Today, we will be submitting to the State Duma a draft federal law to this effect.

This effort will consist of introducing and testing methods and technology which not only reduce greenhouse gas emissions, but also provide for capturing more emissions. This includes special economic and financial incentives. We will also test carbon accounting systems and carbon emission trading schemes.

Moving forward, several other Russian regions may join the experiment. This will determine whether we can achieve carbon neutrality for the entire country.

I am asking the regional governments and all Government members to treat efforts to deliver on this objective with full responsibility.