The Deputy Prime Minister delivered a report at the third Russian-Chinese Energy Business Forum. Alexander Novak spoke about bilateral cooperation between Russia and China in various energy segments, and outlined the prospects for the development of Russian fuel and energy and attracting foreign investment in the industry. 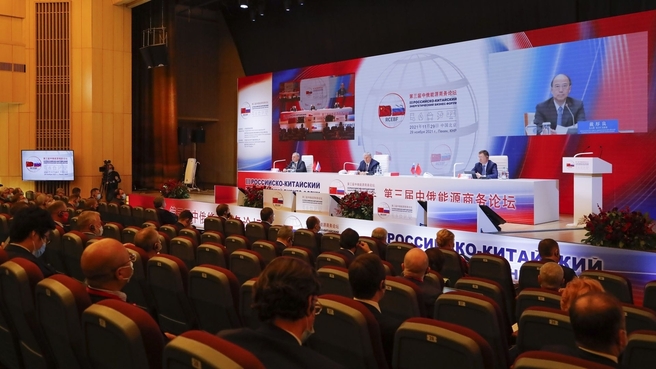 Deputy Prime Minister Alexander Novak delivered a report at the third Russian-Chinese Energy Business Forum. Alexander Novak spoke about energy cooperation between Russia and China, and outlined development prospects for Russian fuel and energy in the period up to 2035 and the principles of state regulation of foreign investment in the industry.

Fuel and energy cooperation between Russia and China has been growing fast over the past decade, and has reached an unprecedented high thanks to the joint efforts of both countries’ leaders.

“Today's forum is a logical extension of the growth  in Russian-Chinese cooperation at all levels, the aspiration of business communities to find new growth points, and to implement new ideas and projects for the benefit of the peoples of our countries. Both Russia and China are confidently overcoming the negative economic consequences of the pandemic. We can see a significant potential for expanding the partnership between Russia and China,” Alexander Novak noted.

The Deputy Prime Minister spoke at length about bilateral cooperation in each of the energy segments. Russian oil has significantly strengthened its position in the Chinese market – oil exports to China have grown more than six-fold over the past decade. Joint development and production projects are underway – Russia’s Rosneft and China Petrochemical Corporation (Sinopec) have launched the Udmurtneft project for the production of crude oil, and natural and associated petroleum gas.

“As regards pipeline gas, as of the end of November, the total volume of Russia’s natural gas supply to China via the eastern route exceeded 13.4 billion cubic metres. Now the possibility of using alternative gas supply routes to the PRC are being explored,” the Deputy Prime Minister said.

Deep processing of hydrocarbons is another promising area of cooperation between Russia and China. Russia’s Novatek is already exploring this with China National Petroleum Corporation (CNPC) and the Silk Road Fund cooperating on the Yamal LNG project. Sibur and Sinopec began to cooperate on building the Amur gas chemical plant.

Inter RAO and the State Grid Corporation of China are considering a further increase in electricity exports from Russia to China.

According to the Deputy Prime Minister, Russian companies are showing great interest in the development of projects in China. In May 2021, Rosatom began building new power units at the Tianwan and Xudapu nuclear power plants in China, as well as the joint construction of the demonstration fast reactor in China. Projects to build hydroelectric power plants in China and joint carbon-free hydrogen energy projects are also quite promising, Alexander Novak added.

Speaking of the Russian energy policy priorities, the Deputy Prime Minister noted that Russia is a recognised global energy leader. “We are determined to preserve the potential of traditional fuel and energy industries as well as to accelerate the development of new segments. Russia possesses huge oil and gas reserves; at current production levels in Russia, the country has a supply of oil for about 30 years, and gas, for about 50 years. These resources will enjoy demand in the energy markets in the near future. Let me emphasise that natural gas, including LNG, is regarded as the cleanest fossil fuel. State measures to support the petrochemical industry in Russia will enable the country to move up to the fifth place in the world for ethylene production by 2030 and to increase investment in the industry to 4 trillion roubles,” he added.

“The share of hydrogen may increase significantly in the global energy balance by 2050, according to various estimates. Russia has important competitive advantages for the development of hydrogen energy and plans to become one of the world leaders in its production,” Alexander Novak said.

He also noted that the traditional energy sources should not be abandoned abruptly. “This could seriously damage the energy security of the entire world. The energy crises occurring in various regions of the planet are proving my point. We support a rational and balanced approach to this matter,” Alexander Novak said.

In general, the Russian fuel and energy industry remains a highly attractive destination for foreign investment, the Deputy Prime Minister said. “Annual investment in Russian fuel and energy has reached 5 trillion roubles. International organisations confirm positive economic development forecasts for Russia. In particular, the International Monetary Fund raised Russia’s 2021 economic growth forecast in October, following the World Bank’s overview. Business activity is recovering. Further economic growth will depend directly on the launch of a new investment cycle – one of the national development goals set by the President of Russia for the next 10 years,” the Deputy Prime Minister concluded.