Deputy prime ministers of Russia and China hold a closing ceremony for the Russia-China Years of Scientific, Technical and Innovative Cooperation 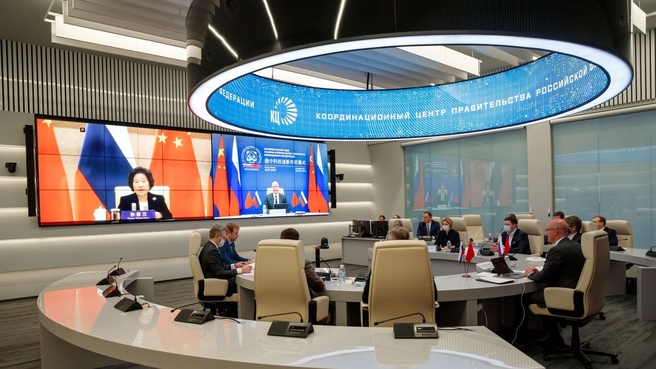 Dmitry Chernyshenko and Vice Premier of the PRC State Council Sun Chunlan, held a closing ceremony of the Russian-Chinese Years of Scientific, Technical and Innovative Cooperation at the government Coordination Centre

President of Russia Vladimir Putin and President of the People’s Republic of China Xi Jinping announced the holding of the Russia-China years in a joint statement on developing comprehensive partnership and strategic cooperation in a new era.

Opening the ceremony, Dmitry Chernyshenko and Sun Chunlan read welcome addresses from the presidents of both countries.

Three agreements were signed in the presence of the deputy prime ministers. 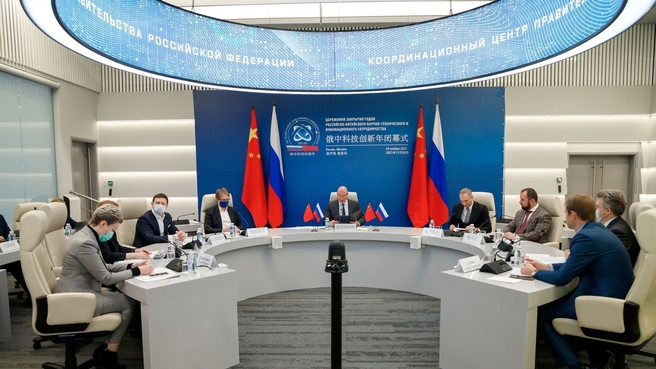 Dmitry Chernyshenko and Vice Premier of the PRC State Council Sun Chunlan, held a closing ceremony of the Russian-Chinese Years of Scientific, Technical and Innovative Cooperation at the government Coordination Centre

A letter of intent on establishing a joint Russian-Chinese Centre for Standardisation and Technology Transfer in Healthcare was signed by representatives of the Moscow Centre for Innovative Technology in Healthcare, the Moscow Innovation Cluster Fund, the Beijing Institute for Medical Device Testing and the Russian Research Institute at Tsinghua University.

Ms Sun Chunlan conveyed heartfelt greetings to the scientists in Russia and China and noted the vast potential of both countries in implementing major strategic projects.

Dmitry Chernyshenko emphasised that the events held during the Russia-China Years of Scientific, Technical and Innovative Cooperation, supported by both leaders, demonstrated a high level of cooperation between scientists and research teams of Russia and China. Thus, during the past two years, they actively exchanged experience in developing medications and vaccines against the new coronavirus infection. They conducted over 30 joint events on this issue.

Both Mr Chernyshenko and Ms Sun Chunlan spoke about the landmark events of the cross years: the joint drafting and signing of the Russia-China roadmap on scientific, technical and innovative cooperation; the participation of the People’s Republic of China in the NICA project; the opening of a joint Russia-China mathematical centre in Beijing; the holding of the first Russia-China youth contest on innovation and entrepreneurship; and Russia’s participation as a guest of honour in the 18th  Chinese Conference for the International Exchange of Professionals.

Mr Chernyshenko said that during the cross years, Russian and Chinese experts developed cooperation in Russian world-class research-and-education centres. Thus, one of these centres, Kuzbass, is going to open an office in China with a view to establishing contacts with Chinese scientific, educational and business entities.

Ms Sun Chunlan said that China held over 300 different events as part of the Chinese plan for the years. The afore-mentioned 18th Chinese Conference for the International Exchange of Professionals in 2020 was one of the most important events. Russia took part in it as a guest of honour.

Summing up, Mr Chernyshenko said: “In the near future, we must facilitate the participation of Russian and Chinese organisations in the mega-science projects in both countries. We should pay special attention to the integration of university science with the real economy for the benefit of the people of both countries. Today, we are not just closing the Years of Russia-China Scientific, Technical and Innovative Cooperation, but are also taking a big step forward towards implementing new strategic initiatives.”

“I am grateful to the Deputy Prime Minister of Russia for his praise of our joint work, which I fully share. Our countries have enormous potential for expanding cooperation in science and technology. We must aim to launch new projects all the time in order to effectively counter new challenges,” said Ms Sun Chunlan.

She conveyed heartfelt congratulations to the scientists of Russia and China, and noted the enormous potential for scientific, technical and innovative cooperation of both countries in implementing major strategic projects.