Deputy Prime Minister of Russia Dmitry Chernyshenko and Vice Premier of the State Council of the People’ Republic of China Hu Chunhua held, via videoconference, the 25th meeting of the Russia-China commission to prepare regular meetings of heads of government. 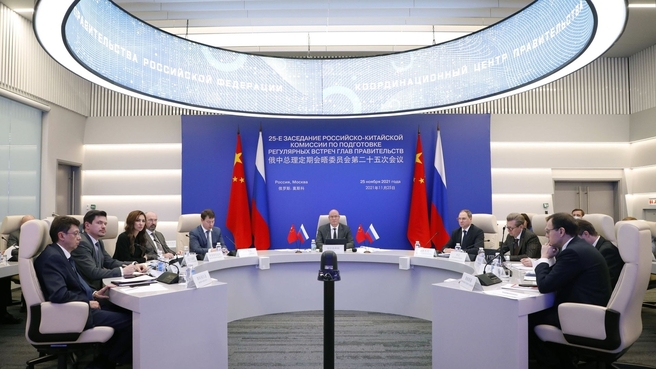 Dmitry Chernyshenko noted that this year marked the 20th anniversary of signing the Russian-Chinese Treaty of Good-Neighborliness and Friendly Cooperation, which laid a solid foundation for the stable, consistent development of bilateral relations in all areas. China is a key trading partner for Russia. In 2020, China’s share in Russia’s foreign trade amounted to 18.3 percent. The deputy prime minister thanked his colleagues for helping to supply Russia with medical oxygen and expressed his hope that relevant cooperation and well-coordinated work would continue.

“The promotion of the equal, trust-based partnership and strategic cooperation with China is a priority of the Russian foreign policy. Last year bilateral trade slightly dropped to $104 billion due to the pandemic, but over the first 10 months of this year it grew almost one third and exceeded $109.7 billion. We have every chance to reach the highest level in our history by the end of the year. Now our main task is to maintain this positive trend. In addition, we have fulfilled our leaders’ instructions to develop together the roadmap to increase our trade in goods and services to $200 billion by 2024,” Dmitry Chernyshenko said.

In his turn, Vice Premier of the State Council of the People’s Republic of China Hu Chunhua noted that the two countries’ efforts were aimed at implementing joint agreements. Tangible results of the comprehensive cooperation between Russia and China can already be seen, for example, in the large steps that have been taken in the fields of trade and agriculture cooperation.

In his report, Russian Deputy Economic Development Minister Vladimir Ilyichyov stressed the effectiveness of Russia and China’s joint efforts within the bilateral mechanism to identify barriers and restrictions in trade, the economy and investment: “This mechanism proved its worth and offers specific practical solutions in agriculture, transport, finance and certification. It also helps providing targeted support to the two countries’ businesses.”

At the meeting, the sides noted how important the joint efforts were to create a secure mobile operation system as a platform for applications and services. An agreement has been reached on cooperation to expand uses of Aurora, a Russian operation system, as well as on building an ecosystem with open source code for applications from the leaders of the Chinese IT industry.

Successful work on environmental protection carried out in the two countries’ border regions was also noted, in particular, their efforts to monitor the quality of Russia and China’s cross-border waters in order to protect populations of unique animal species.

“I believe that today’s meeting will serve as an important contribution in the successful organisation of another meeting between the heads of state and will promote further practical cooperation in all areas,” Dmitry Chernyshenko added.