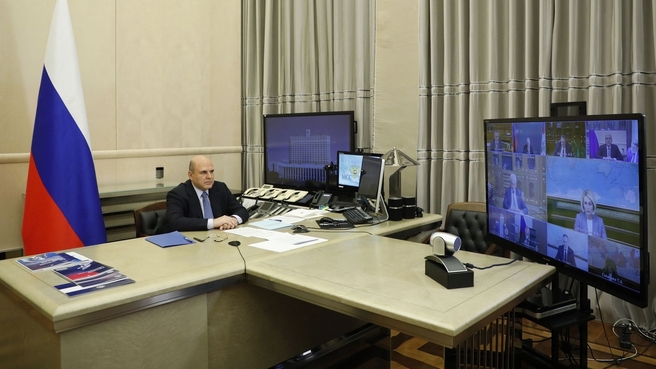 Today we will discuss a number of social matters. One of them concerns the prices of vital and essential medicines, which are on the approved list.

A Government resolution has been signed on a procedure for state control of the prices of such medicines to prevent overpricing. The Federal Anti-Monopoly Service will inspect the documents used by regional health services to calculate markup prices. Information on the results of such inspections and measures taken to eliminate violations will be added to a single register.

Such measures will be taken once every two years at most, in accordance with an approved plan. But there can also be surprise inspections on the grounds of Presidential instructions, at the request of individuals or establishments.

It is important to maintain balance on the pharmaceuticals market so that the prices of vital medicines remain affordable for people.

The Government will also continue working to create a social treasury, a modern convenient platform that will make the support system maximally convenient for people, proactive and technological, so that people will no longer need to deal with red tape or to queue.

A new solution has also been proposed for the one-time payments of pension savings to insured persons. Those who have a right to this will be able to file an application and send the necessary documents remotely via the public services portal. A regulation to this effect has been signed. In most cases, people will no longer have to visit the Pension Fund in person or post the documents. This will allow us to simplify the procedure and time needed to receive one-time payments. And lastly, it will save people’s time and health.

A few words about supporting industrial clusters. It is a Government priority, because it concerns high-tech jobs and regional points of economic growth.

We have mechanisms that stipulate the possibility of subsidising up to 50 percent of industrial companies’ spending during all manufacturing stages. However, it is necessary to closely monitor the effectiveness of these support measures, their application and availability for businesses, so as to be able to adjust them if and when necessary. With this aim in view, we often visit various enterprises and meet with businesspeople during our tours of the regions. We had a detailed discussion on this issue during a visit to the Moglino industrial cluster in the Pskov Region.

Guided by the outcomes of these discussions, the Government has softened the eligibility requirements for joining the industrial clusters that are formed on the basis of cooperation ties. Entities that have not yet established contractual relations with other participants can now become residents as well. They will have three years to set up production and conclude contracts with the residents to buy or supply products.

In addition, for a number of regions, primarily regions where the socioeconomic situation is particularly difficult, the requirements concerning the level of cooperation within the cluster have been reduced from 20 percent to 10 percent which will make a greater number of enterprises eligible for government support, and make it possible to build full-fledged manufacturing chains, create new high-tech industries, and improve their competitive advantages.

It is important to manufacture products with high added value based on domestic components.

The environment is another important topic.

Following our trip to the Far East last year, a number of instructions have been issued, including an instruction to remove sunken ships from the bays. Often, unscrupulous shipowners simply dump them without thinking about the consequences for humans and the environment. The situation is particularly challenging in the Far Eastern Federal District, where more than 200 vessels need to be refloated.

Much remains to be done. The President has repeatedly conveyed that businesses should keep in mind their environmental responsibilities. In the event of violation, the “polluter pays” principle will apply.

Ms Abramchenko, update us on bay cleanup efforts in the regions.

You had the opportunity to see a ship graveyard during a trip to the Far Eastern Federal District last year. Acting on your instructions, we have started a major cleanup effort throughout the country which is carried out on land, where we clean up abandoned enterprises and landfills, and at sea. Under an instruction issued by the President, 20 billion roubles have been set aside for the cleanup during the period to 2024, of which over one billion will be used for wreck removal and salvaging.

Last February, the Government approved an action plan for wreck removal in the Far Eastern Federal District’s water area under which an inventory of sunken ships has been completed. The removal criteria were prioritised. A vessel must be refloated if it presents a hazard to safe navigation or fishing, damages the environment or affects the regions’ tourist potential.