Mikhail Mishustin: “I would like to congratulate the winners in the most prestigious and large-scale team contest for young software developers. They brought home three gold medals out of four, as well as one bronze and the absolute ICPC championship. This is a marvellous result!”

The contest’s mission is to promote professional networking among IT students from universities around the world, while drawing the attention of academia, businesses and the IT industry to a new generation of coding professionals.

More than 60,000 student coders from over 3,000 universities and 115 countries competed in ICPC qualifiers.

Russia has been taking part in the contest since 1995. Russian students have won 80 medals, including 33 gold medals. Moscow was the ICPC Finals’ host for the first time in 2021, preceded in Russia by St Petersburg in 2013 and Yekaterinburg in 2014. 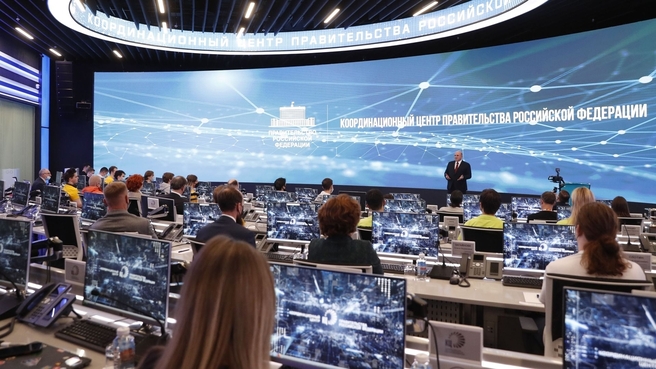 I would like to convey my heartfelt greetings to the members of Russia’s programming team.

I am truly delighted to see you here. First of all, I would like to congratulate the winners on their victory in the most prestigious and large-scale team contest for young software developers: the teams from the Lobachevsky Nizhny Novgorod University, St Petersburg’s ITMO University (formerly the Institute of Precision Mechanics and Optics), the Moscow Institute of Physics and Technology and students from the Higher School of Economics. They won three gold medals out of four, one bronze and carried the absolute ICPC championship. This is a wonderful result!

I would like to convey the President’s congratulations to you. I talked with him on the phone today, and he asked me to express his warmest and most sincere gratitude to you for winning this contest, and wishes for your future success. I can only join him in these congratulations. I think that all of you here today are winners.

You have proven your excellence in mathematics and demonstrated your ability in solving the most challenging problems, and quickly. I have been watching online, and saw your perseverance and strong spirit. On your way to the finals, you had to take part in a qualifying round, which was also challenging, and you came out on top despite the intense competition, proving that you have every right to be viewed as the best of the best.

Of course, without your tutors and teachers this would have been impossible. They are also present here today. I would like to give them my heartfelt congratulations. Thank you for the excellent training you gave to the finalists and all the participants. The mentor’s proficiency is a prerequisite for a student’s success.

I would also like to greet and thank the rectors of the universities that were winners in the Olympiads who are present here today: MIPT Rector Dmitry Livanov, Rector of Lobachevsky Nizhny Novgorod University Yelena Zagainova, ITMO Rector Vladimir Vasilyev, and Rector of the Higher School of Economics Nikita Anisimov. Thank you very much.

This is the third time that Russia has hosted the finals of the International Collegiate Programming Contest. This is an important achievement given that this year is Science and Technology Year in our country, a development spearheaded by the President.  One of its goals is to generate interest among young people in the opportunities offered by digital technologies which it is almost impossible to do without these days, including in public service.

It is no coincidence that we have gathered in the Government Coordination Centre today which is where, on a daily basis, we draft and implement plans to achieve national development goals. We realise that in order to meet modern requirements and, primarily, to achieve what the people want us to achieve, we need an innovative management format and management system.

Much has already been accomplished in this regard. User-friendly services can be used to address multiple issues that posed a challenge quite recently, when people had to visit government offices and gather numerous papers. Now, it is even possible to apply for admission to a university using the public services website.

In order to digitalise the operations of ministries and departments, each one of them now has a deputy head in charge of digital transformation, who is responsible for making interaction with the public more efficient and convenient.

Technology is drastically changing the future in which you will live and work. Of course, transition to the digital economy poses formidable goals for the development of the IT industry in our country.

The President of Russia designated digital transformation as a national development goal. Once achieved, it will ensure groundbreaking and rapid changes in the economy, including the transition of many work processes online. During the pandemic, digital solutions have become the main link connecting society. They ensured the work of literally all industries, education and healthcare and, of course, government bodies.

Highly skilled personnel are critical if we want to be successful. Our immediate plans include changes in education. For example, students will be able to train in digital specialties over and above their major occupation.

I am confident that the ICPC will boost young people’s interest in modern information technology, AI solutions, cybersecurity, and big data.

In just a few years, you will complete your studies at universities, many of you will do so very soon. You will be taking on serious and responsible tasks, and creating unparalleled software solutions. The country will need your knowledge and skills, and not just in business. The government is very interested in creating a proper environment for professional fulfilment. You will get the chance to make an enormous contribution to boosting competitiveness of Russian IT products, solutions and services.

Friends, a lot of opportunities are open to you now. Go ahead and let your imagination flow. Do not hold back from setting yourselves the most ambitious goals, go beyond things that are familiar and understandable. I am confident that you will succeed. With all my heart I wish you good luck and great victories.

On the agenda: expansion of the list of vital medications; support for regional infrastructure projects on developing electric transport; renovation of schools; support for the Russian Far East; modernisation of post offices; and preparations for holding the UEFA Champions League
1
Show More