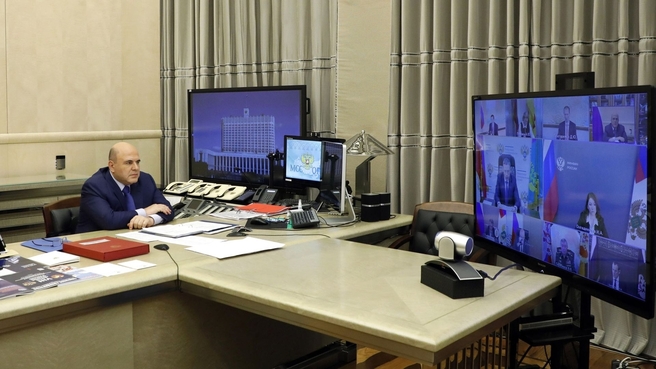 The federal budget performance in the first six months of this year is on the agenda of today’s meeting. Overall, the results are quite positive and fully reflect the positive developments in the Russian economy. This is primarily attributable to the President’s decisions to support people during the pandemic and those sectors that were affected. These measures not only mitigated the negative consequences of the coronavirus, but also helped to revive economic growth.

Business activity is recovering. In fact, a number of sectors exceeded pre-pandemic production levels. Unemployment is going down, which helps drive up wages. This, in turn, leads to higher consumer demand.

The important thing is that investment activity is picking up. Businesses are resuming their investment programmes, thanks in part to fiscal incentives.

All this has had a positive impact on the budget. Revenue exceeded expectations by more than a third, which created a substantial surplus. Public debt remains at quite a comfortable level.

The Government expects the current positive trends to gain momentum. In fact, we proceeded from this premise when drafting the next three-year budget. It is almost ready. All that is left is to add a few finishing touches. The next budget provides for gradual increases in supporting our citizens, including as part of the efforts to implement initiatives set forth in the Presidential Address to the Federal Assembly.

Tomorrow, the budget package will be sent over to the State Duma. We will discuss it with the new legislature and make sure that the parliament approves it.

Today, we will discuss competition in the Russian economy. I would like to highlight a number of important aspects in this regard.

Last year the National Competition Development Plan came to an end. It helped halve the number of anti-trust violations made by government agencies, while increasing public procurement from SMEs. It also helped introduce competitive procedures with at least three bidders in all sectors of the economy, except for natural monopolies and the defence industry.

The pandemic gave rise to new challenges, and affected many economic processes, with Russian people and businesses becoming increasingly more interested in and committed to digital transformation and e-commerce.

These and other changes have been taken into account during the drafting of the new National Competition Development Plan intended to last for the next five years. It was approved in early September. The aim of the plan is to create favourable conditions for innovative development and higher entrepreneurial and social activity.

Let us now go over to topics related to the development of the agroindustrial complex. For the first time, we will allocate over 10 billion roubles for the regions as part of the grain damper mechanism that was approved during the summer.

The Government has pegged agricultural export duties to world grain prices and now, by introducing floating rates, we can provide extra funds to [Russian] wheat, rye, barley and corn producers.

This year, we will allocate agricultural funds for 62 regions. For each constituent entity, these have been calculated based on the volumes of the actual production. This money will compensate up to 50 percent of the costs involved in producing and selling grain crops.

The new state support mechanism creates long-term and comprehensible conditions for the industry, increases its competitiveness and shapes an environment for extra investment.  This results in consolidating national food security and most important of all, helps to stabilise the domestic grain prices.

We will also consider two draft laws specifying the regulation of the fishing industry.

One of these initiatives is supposed to revise the amount of fishing charges that have remained intact for the last 16 years.  This will make it possible to increase budget receipts at all levels. What’s important here is that the increase in the rates will apply to chiefly exported sorts of fish and also seafood, while the rates for socially significant kinds of fish, such as herring, saury, whitefish, crucian and some others, will remain unchanged.

Apart from this, the Government has envisaged a mechanism to provide benefits to the fishing industry businesses that invest in production development and increase volumes of fish and seafood processing at factories in Russia.  Under the draft law, these companies are entitled to a deduction and will pay only 15 percent of the fee if they engage in littoral fishing, or process their catches onshore or out at sea, or use new ships built in Russian shipyards.  But the exporters preferring to haul fish abroad will have to pay the full amount.

We will also expand the use of digital technologies in the industry. As of 1 September 2022, fishing companies will be able to get their fishing licenses online. Specialised software has also been developed to enable skippers to keep an e-fishing log right at sea and send the data certified by their digital signature via encrypted channels, which is the maximally prompt and correct type of transmission.  We hope that these changes will make it much simpler for fishing companies to keep records.

Here is another issue. We will review amendments to legislation on the development of cinematography. The Government has drafted them as per the President’s instruction, so as to provide more targeted support for this sector. Today, state funding for cinema projects should not exceed 70 percent of total filming costs. We are increasing this funding to 100 percent for certain film categories. From now on, novice film directors will be able to shoot their debut films completely at the state’s expense. Budget subsidies will provide sufficient initial funding for young filmmakers, who always find it hard to finance their projects. They will be able to obtain such assistance for a period of five years after graduating from a specialised federal higher education institution.

Moreover, it will be possible to obtain 100-percent funding for documentaries, including popular science films, and unique animation projects. Unlike commercial projects, these films do not yield substantial profits and do not always recoup their costs. They account for a substantial share of the national cinema industry, and audiences appreciate their analytical approach and new knowledge, as well as their perceptive insights that expand people’s outlook.

Russia has every chance of producing even more high-quality and spectacular films. We have many talented directors, gifted actors, screenwriters and directors of photography, as well as other specialists. It is necessary to unlock their potential, all the more so as audiences like Russian films. Last year, over 26 million people watched films produced with state support.

We hope that members of parliament will discuss the bill at their upcoming session, and that the amendments will enter into force in January 2022. The Government will continue to support Russian cinematography in the future.