Alexei Overchuk’s working visit to the Republic of Armenia

On 20 September, a delegation of Russian business leaders led by Deputy Prime Minister of the Russian Federation Alexei Overchuk visited Yerevan, the capital of the Republic of Armenia. 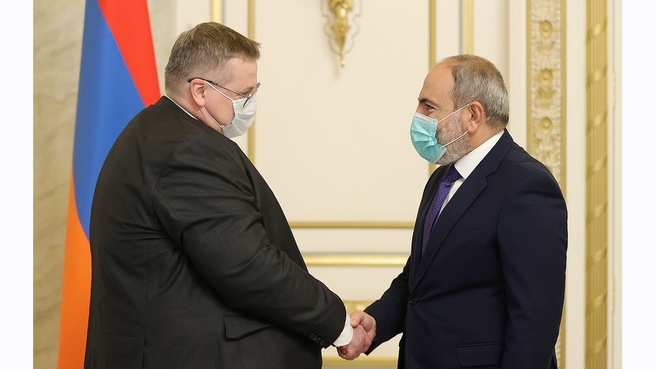 Alexei Overchuk’s working visit to the Republic of Armenia

During the visit, Alexei Overchuk met with Prime Minister of Armenia Nikol Pashinyan to discuss the development of Russian-Armenian cooperation in trade and the economy.

The Deputy Prime Minister pointed out the importance of the Russian and Armenian business communities’ activities as a pillar of bilateral trade and economic relations. He mentioned positive trends in mutual trade, which increased by 17.2 percent between January and July 2021 year on year, and stressed that there was great potential for boosting mutual trade and investment.

“Russian and Armenian business people are receiving support from state bodies in both the Russian Federation and the Republic of Armenia and can use Russian development instruments, namely VEB.RF and the Russian Export Centre, to expand their business opportunities. Our country can offer effective solutions for the development of transport, energy and  social infrastructure, as well as for implementing prospective projects in the Republic of Armenia and the South Caucasus as a whole,” Alexei Overchuk pointed out.

He called on the business communities of Russia and Armenia to consider cooperation opportunities not only in traditional spheres, such as mechanical engineering, transport, fuel and energy, but also in infrastructure and digital technology. He commended the efforts ofthe Russian-Armenian Intergovernmental Commission on Economic Cooperation to create comfortable conditions for the implementation of these projects.

“We hope that following this event we will be able to launch new joint projects that will boost the further development of our bilateral relations, the Deputy Prime Minister noted.

Alexei Overchuk also attended the opening ceremony of the Armenian Business Forum 2021. In his remarks there, he spoke about the strategic nature of bilateral and multilateral cooperation between the Russian Federation and the Republic of Armenia.

“Despite the pandemic, Russia has remained Armenia’s leading trade partner and currently accounts for nearly a third of its foreign trade. Between January 2015, when Armenia joined the Eurasian Economic Union, and the start of the pandemic, our bilateral trade almost doubled from $1.3 billion to$2.5 billion,” the Deputy Prime Minister said.

He noted that a new strategic intergovernmental midterm document – Programme of Economic Cooperation until 2025 – was in the works. The document is designed to boost Russian-Armenian trade and investment collaboration and will define the main spheres of bilateral interaction. “These will be specific events in each industry to be incorporated into the Plan of Events. We will prioritise their formulation, doing this jointly with the business communities of our two countries,” the Deputy Prime Minister said.

Speaking of multilateral cooperation, Alexei Overchuk emphasised the efficiency of collaboration within the EAEU. He pointed out that the Russian Federation and the Republic of Armenia were maintaining constructive dialogue on the most important matters related to EAEU development and integration. The two countries held the same views on EAEU digitalisation as well. Joint digital projects have been launched, the first of which is the Travel without COVID-19 mobile app. “The project is developing successfully, it already involves some countries outside of the EAEU, and the total number of downloaded PCR tests has exceeded one million. Moreover, it is the first digital project of this type launched by a regional integration association,” he explained.

Mr Overchuk noted that the EAEU was transiting to e-document management and introducing digital product traceability. “Trade digitalisation serves to maximally simplify access to the EAEU market and boosts the efficiency of administering the customs and tax payments.  To fully use the EAEU’s logistic potential, we are phasing in an ecosystem of digital transport corridors. The aggregate anticipated effect from its introduction will be anywhere between 1.5 and 2 billion US dollars. We are also launching a digital project entitled Work without Borders in the EAEU countries, which will make it possible for local workers and employers to find each other in no time. The project is beginning to yield a positive effect for the business community,” he said.

Alexei Overchuk stressed that the said projects were an effective tool in helping to revive economies after the pandemic and a confident step on the way towards further EAEU growth, facilitating as they were the emergence of a favourable business climate in the Union.

The meeting was devoted to the countries’ cooperation within the Caspian Region as well as the supply and transit of Russian energy resources.
20 October 2021 Meeting of the Trilateral Working Group co-chaired by deputy prime ministers of Azerbaijan, Armenia and Russia Deputy Prime Minister of the Republic of Azerbaijan Shahin Mustafayev, Deputy Prime Minister of the Republic of Armenia Mher Grigoryan and Deputy Prime Minister of the Russian Federation Alexei Overchuk chaired a meeting of the Trilateral Working Group.
20 October 2021 Mikhail Mishustin’s telephone conversation with Prime Minister of Kazakhstan Askar Mamin
20 October 2021 Dmitry Chernyshenko: 600 Russian athletes training for 2022 Winter Olympics in Beijing
19 October 2021 Dmitry Chernyshenko spoke by phone with Zeev Elkin Deputy Prime Minister Dmitry Chernyshenko spoke by phone with Minister of Jerusalem Affairs and Heritage, Minister of Construction and Housing, Minister for Liaison Between the Knesset and Government Zeev Elkin.
19 October 2021 Meeting of the Presidium of the Coordination Council to control the incidence of the novel coronavirus infection in the Russian Federation Mikhail Mishustin: “There has been a significant increase in the infection rate and the burden faced by medical institutions is growing. It is essential that we do our outmost to make sure that the situation does not reach a critical point, and stop the infection from spreading further. We are talking about the health of our people here.”
19 October 2021 Alexei Overchuk addressed the 8th Russian-Armenian Interregional Forum The Russian-Armenian interregional forums have been held since 2011 to identify promising areas of cooperation and establish new ties between Russia and Armenia at the regional level. Deputy Prime Minister Alexei Overchuk addressed the forum via videoconference.
18 October 2021 35th session of the Foreign Investment Advisory Council in Russia
17 October 2021 Mikhail Mishustin congratulates Russian high schoolers on winning Internaional Mathematical Olympiad
14 October 2021 Government meeting