Various aspects of interaction between the Government and the Federation Council during the legislative process were discussed. 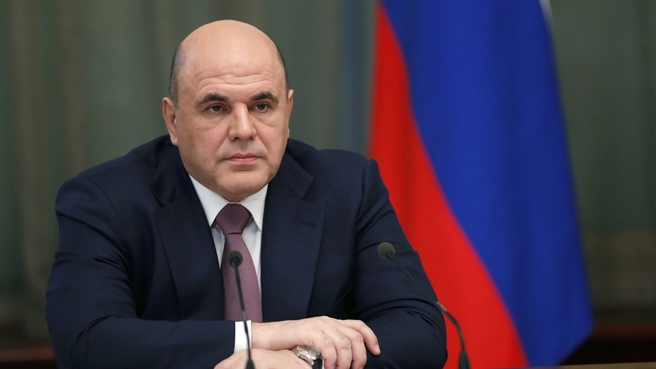 Meetings between the Government and the Federation Council leaders are not just a good tradition but also evidence of the efficient working relations that have taken shape between them. I think we are cooperating with great success in many diverse venues. My deputies and the spokespeople for our ministries and departments take part in the chamber meetings and in the conferences of committees and interdepartmental groups. The ministerial state secretaries that oversee the updating of legislation work closely with the Federation Council. It is also vital for us to have feedback during government hours. After every meeting, we instruct the ministries on specific tasks with due account of the proposals made by the senators.

Naturally, we have established a productive cooperation format. We met a year ago in almost the same lineup as today, and discussed a broad range of issues.

Following the meeting, we assigned the related instructions. Deputy Prime Minister and Chief of the Government Staff Dmitry Grigorenko established special control over implementing them. There were over 20 instructions and practically all of them have been carried out. I know, work is still underway on two of them, but this is all in line with our agreements.

During the last meeting you emphasised the need to expedite the coordination of draft laws and the adoption of delegated legislation. We adjusted the necessary procedures, which enabled us to review them more quickly and adopt regulations that are needed for the timely entry of laws into force. In turn, the Federation Council gave us competent support in this process, in part, for the adoption of necessary laws.

I would also like to say a few words about the important decisions that have been made recently. First, I would like to thank you for your consistent support and cooperation in the work on the national plan, including the proposals from the senators. We hope the Federation Council members will monitor the fulfillment of the plan’s provisions and the measures taken in the regions. We are ready to use mechanism of parliamentary control as well as our authority and take prompt decisions on the spot, if need be. 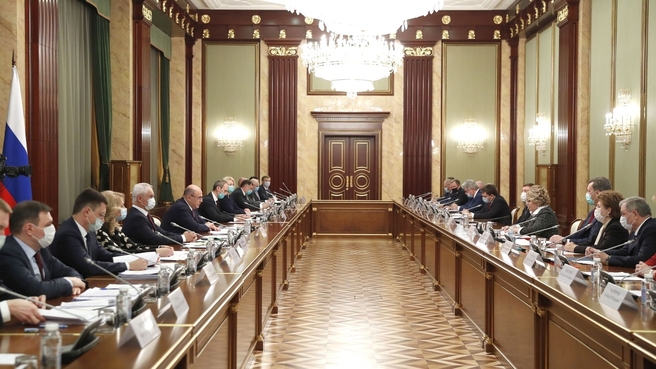 Entrepreneurs, deputies and your colleagues, the senators, praised the plan’s FOT 2.0 easy loan programme. It encouraged businesses from affected industries to maintain employment levels and became one of the best support measures for small and medium companies.

The programme is nearing completion, but a number of industries have not yet recovered to pre-crises levels. I am referring to the catering industry, sports and entertainment, the tourist business and some others. All of them still need some state support.

Today, with the representatives of the regions of the Russian Federation, I would like to announce a very important decision: we have new measures for supporting businesses in the hardest-hit industries, which was earlier covered by the FOT 2.0 programme.

I reported to the President of the Russian Federation a new approach before our meeting, including the proposals made by the senators. The President approved the launch of FOT 3.0, a new annual programme. The terms of the programme will be changed a bit. Now the interest on an easy loan will be 3 rather than 2 percent. This is a small increase considering that the economy is gradually recovering. Companies will receive new growth opportunities. During the first six months, businesses will not pay the principle and interest on the loan. They will do so only in the second half of the year by paying equal monthly installments.

Furthermore, the programme will now include micro, small and large enterprises in the least recovered industries, which have not yet fully returned to their pre-crisis levels.

We expect about 75,000 businesses, which employ about 1.5 million people, to potentially benefit from this support. During this time, we will hopefully complete most of the vaccination programme, the demand for services in these industries will increase, and they can begin a rapid recovery. This kind of state support should give business a new impetus for development.

There are other decisions that we have made in close cooperation with the Federation Council. The necessary conditions have been created to facilitate the taxpayer transition from the single tax on imputed income to other tax schedules. Agreements on protection and promotion of investments, a new mechanism for attracting investment to the regions, have shown positive results. About 30 such agreements have been concluded in various industries by now.

We also continue working to improve the public procurement mechanism. As regards an update of the forestry legislation we discussed at the previous meeting, the introduction of digital technologies is certainly of great importance for improving the quality of management and creating feedback mechanisms. We are doing this as part of the development of regional administration centres.

I hope that today we will propose some specific solutions that are needed for the successful development of Russia’s regions. Many upper house members are former heads of regions with a wealth of experience in administrative work and awareness of state of affairs on the ground. Their expertise is helpful in developing strategic approaches, as well as in fine-tuning the necessary management processes. Senators’ strong advocacy is especially important now that we are working to overcome the consequences of the coronavirus outbreak. 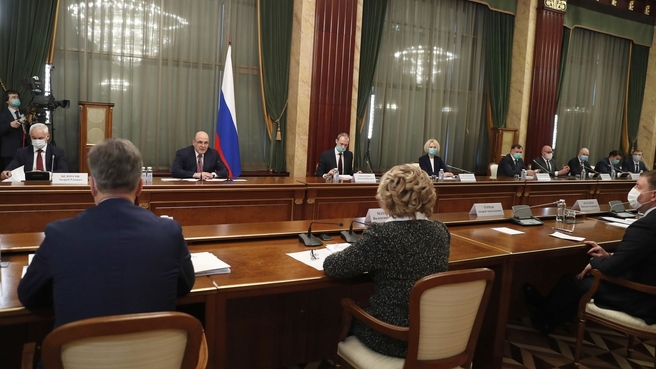 The Government has made a number of important decisions to mitigate the situation on the ground. We have provided unprecedented support by channeling more than 1 trillion roubles (1.1 trillion approximately) to the constituent entities of Russia in the form of subsidies, including to equalise their financial capacity, compensate for revenue shortfalls, and to stabilise regional healthcare to help the regions provide high-quality and timely medical services.

We will continue to support the regions. This year, we have provided 100 billion roubles in subsidies to help them balance their budgets. In addition, we are working on 10 individual programmes to improve the socioeconomic situation in the most difficult regions.

I would like to thank you, Ms Matviyenko, for your systematic support of this approach. You have always supported this area, and even at the start, I remember you vigorously discussing how to implement such programmes.

I know that the senators from those regions report to you on the sufficiently effective implementation of these programmes. After all, the main goal of individual programmes is to increase people’s incomes and quality of life, to create jobs, and growth points in those regions.

I have already visited most of the ten regions during my working trips and intend to visit every one of them. After all, making effective decisions sitting in an office is difficult, if not impossible. The same approach is supported by all my deputies who are here today, and Government ministers; this is a good platform for our joint work.