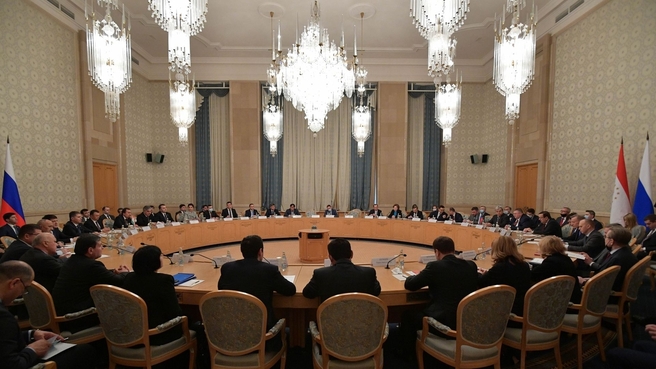 The officials discussed a broad range of cooperation issues in the economic, trade, scientific-technical, cultural and humanitarian areas.

“Russia and Tajikistan are traditionally linked by warm friendly relations based on a common history and an affinity between our nations and a striving to develop mutually beneficial ties in the trade, economic, cultural and humanitarian fields,” noted Mr Overchuk.

The Russian Federation remains the Republic of Tajikistan’s main economic partner. In the first 11 months of 2020, trade amounted to $740.8 million. Mr Overchuk said it was necessary to further promote trade and economic cooperation particularly in such promising areas as agriculture equipment manufacturing, auto assembly, energy engineering and high-technology. The deputy prime minister noted Russia’s willingness to expand the range of exports of high capacity agriculture machines and equipment. Such projects can be carried out under lease programmes and with the use of current instruments of Russian export agencies.

IT was called a promising area for bilateral cooperation. “Russian IT companies are interested in developing contacts with their Tajik colleagues and are willing to offer advanced technology, primarily, in e-government, smart and safe city technology, information security, and in remote digital education and telemedicine, which are becoming more important during the pandemic,” Mr Overchuk emphasised.

As part of cooperation to ensure sanitary-epidemiological wellbeing, the officials agreed that a delegation from Rospotrebnadzor (Federal Service for the Oversight of Consumer Protection and Welfare) will visit Tajikistan to assess the epidemiological situation and prepare a report for the emergency response centre on preventing the import and spread of the coronavirus infection in Russia. The Tajik officials were shown the “Travelling without COVID-19” application. They were offered the opportunity to join it to help Tajik citizens travel to Russia. 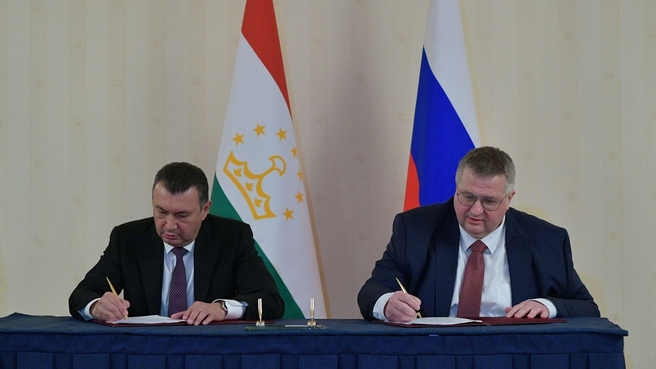 The Tajik and Russian officials described bilateral humanitarian cooperation as an important part of their relations. At present, over 29,000 Tajik citizens study at Russian universities. Of this number, about 15,000 students receive an education under Russian federal grants and 14,000 students study under contracts on education paid by individuals and companies. The project on providing jobs for Russian teachers in Tajik schools has been ongoing in Tajikistan since 2017.

“Much has been done to implement the agreements between the Russian and Tajik presidents on building schools with Russian language instruction in Tajikistan. Now we need to confirm the operating terms in the relevant intergovernmental agreement. In particular, the education activities must be based on Russian standards, which will allow Tajik citizens to receive an education based on the best Russian practices, said Mr Overchuk.

The participants also noted the importance of developing cooperation on migration and agreed to continue contacts to facilitate the provision of government services for guest workers from Tajikistan, which are required for entry into the Russian Federation and for working in Russia.

Bilateral relations have substantial development potential in cultural areas. In 2020, online and offline projects were carried out in different formats. Special attention was paid to the support for the Mayakovsky State Drama Theatre in Dushanbe.

“A number of priority cultural and humanitarian cooperation projects are planned for 2021. These include Days of Russian Culture and Russian Cinema Week in Tajikistan. In addition, we are planning a joint performance by our companies in the interstate programme, “Dushanbe, the CIS cultural capital,” and international events devoted to the 30th anniversary of the CIS,” said Mr Overchuk.

The development of energy engineering, the agro-industrial sector and humanitarian contacts were described as promising areas for interregional cooperation. The participants noted the potential for tourism. The annual conference on interregional cooperation between Russia and Tajikistan has become an effective tool for further expanding interaction at the regional level.

Following the session, the participants signed the protocol of the 17th session of the Intergovernmental Commission on Economic Cooperation between Russia and Tajikistan.