Excerpts from a briefing with deputy prime ministers. 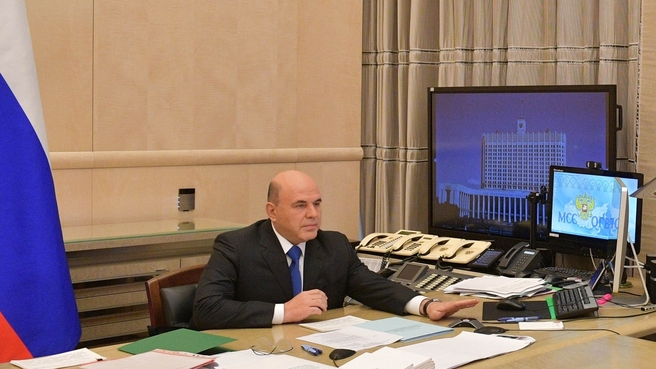 Before we begin discussing the agenda, I would just like to say a few words about personnel changes. The President supported our proposals on several ministers’ resignations. I am referring to Minister of Transport Yevgeny Ditrikh, Minister of Construction, Housing and Utilities Vladimir Yakushev, and Minister of Natural Resources and Environment Dmitry Kobylkin. Today, in accordance with the new federal constitutional law, I have submitted to the State Duma several candidacies to fill these Government positions.

The proposal is to appoint Alexander Novak as Deputy Prime Minister. I do not think he needs any special introduction. You all know him well, as many of you have been working side by side with him for rather a long time. Several other proposals have to do with appointments to the posts of federal ministers.

Nikolai Shulginov is nominated for Minister of Energy.

Irek Fayzullin is nominated for Minister of Construction, Housing and Utilities.

Vitaly Savelyev is nominated for Minister of Transport.

Alexander Kozlov is nominated for Minister of Natural Resources and Environment.

Alexei Chekunkov is nominated for Minister for the Development of the Russian Far East and Arctic.

All of the nominees have extensive experience in effective problem-solving in various industries. They all have shown high performance results in their previous jobs. I hope that after the review, deputies will support these candidates.

I would also like to say thank you to Yevgeny Ditrikh, Dmitry Kobylkin and Vladimir Yakushev for their work and wish them every success in their new career moves.

26 November 2020 On 2 December 2020, Prime Minister Mikhail Mishustin and Premier of the State Council of the People's Republic of China Li Keqiang will hold the 25th regular meeting of the heads of government of Russia and China via videoconference
26 November 2020 On 30 November 2020, Prime Minister Mikhail Mishustin will take part in a meeting, via videoconference, of the Council of Heads of Government of the Shanghai Cooperation Organisation
25 November 2020 Deputy Prime Minister of the Russian Federation Alexei Overchuk held a meeting with Speaker of the National Assembly (Majlisi Milli) of Tajikistan Rustami Emomali
25 November 2020 Deputy Prime Minister Alexei Overchuk addresses the 6th international conference Preventing Disruption in Education 6th international conference on assessing the quality of education, Preventing Disruption in Education, as part of the Education 2030 project and the publication of the OECD report What Students Learn Matters: Towards a 21st Century Curriculum.
24 November 2020 Dmitry Chernyshenko chaired the 24th meeting of the Russian-Chinese Commission on Preparing Regular Meetings of the Prime Ministers

Russia is committed to expanding economic cooperation with China in order to consolidate neighbourly relations and to ensure progress in both countries, the Deputy Prime Minister pointed out.
24 November 2020 Mikhail Mishustin’s meeting with coronavirus vaccine manufacturers

Mikhail Mishustin: “In order to begin mass vaccination as soon as possible, well-managed coordination of action is necessary at all levels – from developers and scientists to manufacturers and suppliers.”
23 November 2020 Meeting of the Government Coordination Council on controlling the incidence of novel coronavirus infection in the Russian Federation

Mikhail Mishustin: “The Government is expanding the list of essential and vital medications. It will include the existing anti-coronavirus vaccines regardless of their names. They must be accessible to all those who need to be vaccinated.”
23 November 2020 Meeting with deputy prime ministers

The Prime Minister addressed a plenary discussion on Russia’s Transport: Speed, Convenience and Efficiency, at the 14th International Forum and Exhibition Transport of Russia. He also presented state awards to the transport sector’s employees.
16 November 2020 Mikhail Mishustin’s telephone conversation with Prime Minister of Armenia Nikol Pashinyan
16 November 2020 Meeting of the Government Coordination Council on countering the spread of the novel coronavirus infection in Russia

Mikhail Mishustin: “The Government is allocating funds to establish mobile outreach medical teams. Subsidies will be given tor medical institutes and clinics that have serious research schools and extensive practices. There are 32 of them in the country. Medical workers in the regions will receive timely consultative and methodological assistance. This will make it possible to reduce the load on regional health systems.”
12 November 2020 Mikhail Mishustin spoke by telephone with Acting President, Prime Minister of Kyrgyzstan Sadyr Japarov
9 November 2020 Meeting of the Government Coordination Council to control the incidence of novel coronavirus infection in the Russian Federation

Mikhail Mishustin: “I would like to ask the Healthcare Minister and heads of regions to personally oversee assistance to medical facilities and to patients who are being treated at home. This includes test kits, personal protection equipment and medication. Patients in need of hospital care must be provided with the opportunity to be hospitalised. No patient should remain without medical help.”
9 November 2020 Government personnel changes

Excerpts from a briefing with deputy prime ministers.
6 November 2020 Meeting of CIS Council of Heads of Government

The agenda of the meeting includes economic cooperation, overcoming the consequences of the COVID-19 pandemic, restoring the economic growth rate in the CIS member states, elaborating an action plan to implement the first phase of the Strategy of the CIS Economic Development, as well as boosting cooperation in innovation, transport security, interregional and border cooperation, and the peaceful use of nuclear energy.
28 October 2020 Mikhail Mishustin sends a message of greetings to the participants and guests of the 3rd International Conference “Sustainable tourism: Global challenges and Russian perspective” in Sochi
1
Show More