The event was held via videoconference.

Viktoriya Abramchenko’s report on the situation with forest fires 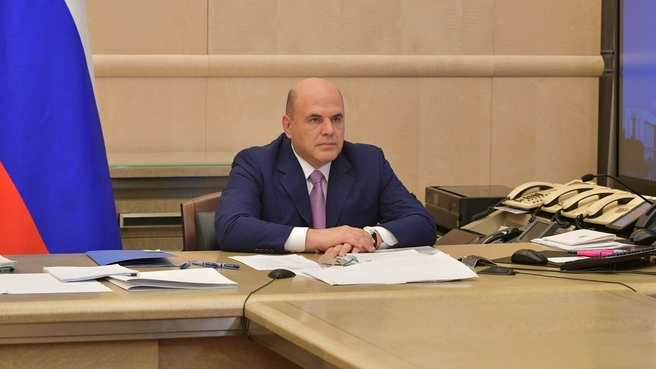 Mikhail Mishustin: Good afternoon, colleagues. First of all, I would like us to speak about the forest fires. The situation is quite complex in some regions of Siberia and the Russian Far East. In some regions a state of emergency has been introduced.

Ms Abramchenko, we would like you to tell us what is being done to deal with this pressing problem.

Viktoria Abramchenko: Mr Mishustin, unfortunately, the situation regarding forest fires is rather complex. Due to an unusually warm winter and an early and dry spring, the fire season has begun much sooner than usual this year. The first forest fires were reported already in January. For the first time in the history of satellite monitoring, we registered a forest fire inside the Arctic Circle.

Already in April, the weather in many parts of the Siberian and Urals federal districts, as well as in the Volga Region, was unusually hot and windy, and thunderstorms have had an adverse effect as well. This year, forest fires have consumed an area of 1.2 million hectares. There have been more than 9,000 forest fires. At the same time, the area of forest fires this year was 25 percent less than in the same period of the preceding year. The Far Eastern Federal District was hit the hardest. It accounts for some 80 percent of forest fires this year.

As of today, we are working to put out 155 fires with an aggregate area of 33,000 hectares in 19 Russian regions. The efforts involve 5,500 firefighters and approximately 900 pieces of equipment, including aircraft, 66 of which are monitoring the situation and 31 are putting out the fires. The interregional efforts include 681 members of the airborne service of the Avialesokhrana forest fire monitoring agency and regional forest fire air bases. These efforts are being taken in the hardest hit regions of Russia.

Due to the combined efforts of the federal and regional fire services, there is no threat to the lives of people or to the economic infrastructure. Our wildfire fighting teams are managing  to promptly put out any new outbreaks of fire. For instance, 162 wildfires covering  an area of 22,600 hectares were extinguished in the past 24 hours.

I would like to say just a few words about the wildfire situation of the past week. In three regions, there were the most pressing developments: the Republic of Sakha (Yakutia), the Krasnoyarsk Territory and the Khanty-Mansi Autonomous Area. A regional emergency situation has been declared in these three regions.

The largest fires are in Yakutia. Given the control areas, over 300,000 hectares are on fire with 159 wildfires. At the end of last week, four residential areas, including the capital, Yakutsk, were blanketed with smoke. The buildup of firefighting forces is currently underway there.

As part of the regional maneuvering, the Emergency Ministry aviation has brought an additional 100 smokejumpers there from the neighbouring regions. Explosives are being used in fighting the fires in hard-to-reach areas in the republic, where 188 people from the Avialesookhrana wildfire service are working.

In the Khanty-Mansi Autonomous Area, 91 percent of the wildfires were caused by the heat wave and thunderstorms. At the moment, 21 wildfires covering an area of 13,000 hectares are being extinguished by 609 firefighters and 40 pieces of equipment, plus 18 aircraft (9 of them engaged in firefighting and 9 in monitoring operations). On 16 July, a coordinating meeting was held with the participation of two federal ministers, Yevgeny Zinichev and Dmitry Kobylkin. Measures were taken to stabilise the wildfire situation and adjust the efforts of the regional and federal authorities. In addition to this, the region has allocated an additional 100 million roubles to fight the wildfires.

Mr Mishustin, I would also like to report on the main system-wide measures taken by the Government to counteract the wildfires.

First of all, we have organised monitoring operations with the data provided by satellite coverage and Earth remote sensing. We can see the fires in real time and keep an eye on them via the federal headquarters every day.

We have agreed upon and approved plans to extinguish the wildfires. An interregional plan for maneuvering fire brigades and equipment has been developed.

Third. We reduced the control zone by 92 million hectares. These are the zones that caused the major and most harsh wildfires in the Krasnoyarsk Territory last year.

Fourth. The federal centre and the regions are every day holding meetings and taking urgent measures to deploy forces and equipment between the regions if this should be necessary.

Fifth. This year the Federal Agency for Forestry has teamed up with the Emergencies Ministry.

Sixth. As part of the Environment project, the regions received over 15,000 pieces of up-to-date firefighting equipment that is currently being used to fight the wildfires.

Seventh. The federal allocations for wildfire fighting in 2020 are 6.2 billion roubles. This money has been transferred to the regions in full. In order to prevent loan debts for firefighting expenses, the Federal Agency for Forestry has allocated 328 million roubles from its own reserves for the most affected regions.

Mr Mishustin, I would like once again to thank you for the prompt decision to allocate an additional 2.6 billion roubles from the Government reserve fund for fighting the wildfires. This money is being given to the 19 most affected areas.

Two more questions remain. First, the designation of Emergencies Ministry units as sole performers of aircraft delivery of forces and equipment of Avialesookhrana, and providing free food and water to the people who are directly involved in fighting the wildfires. These people are risking their lives and health in fighting the fires. I would like to ask you to support this.

The event was held via videoconference.
17 July 2020 Mikhail Mishustin’s meeting with Prime Minister of the Republic of Armenia Nikol Pashinyan

The meeting was part of the Russian Prime Minister’s visit to Belarus to attend a session of the Eurasian Intergovernmental Council.
17 July 2020 Mikhail Mishustin meets with Prime Minister of the Republic of Kazakhstan Askar Mamin

Agenda includes measures to promote the Russian IT industry, draft federal laws and budget allocations
15 July 2020 Meeting of the Government Coordination Council to control the incidence of novel coronavirus infection in the Russian Federation

Agenda: development of the IT industry
8 July 2020 Mikhail Mishustin’s video address during the Global Leaders’ Day of the ILO Global Summit on COVID-19 and the World of Work
1
Show More