Dmitry Medvedev delivered remarks at the plenary session titled Green brand. Made in Russia: prospects in the global food market.

The First International Agro-Industrial Forum (IAIF 2019), which is underway within the framework of the Agricultural Week, was organised by the Ministry of Agriculture to discuss the development of organic and environmentally friendly products.

The forum participants will focus on new trends in food production, processing and cooking technology, the introduction of digital services in the Russian agro-industrial sector, the protection and promotion of regional brands in Russia and other countries and the enhancement of the export potential of the Russian agro-industrial sector, as well as interaction between the state and farmers. 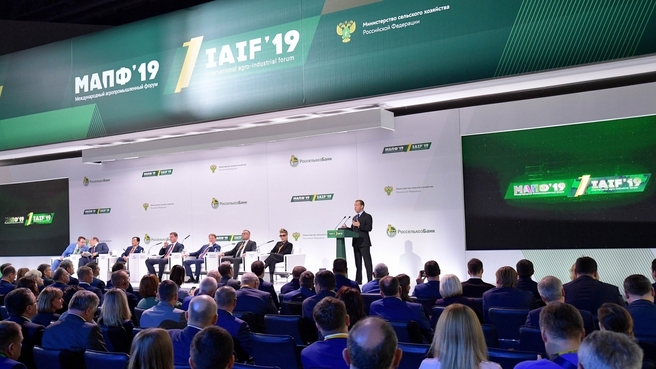 I would like to welcome all participants in the First International Agro-Industrial Forum. We are holding this event for the first time. I believe that it is an important initiative.

I attended the opening ceremony of the Golden Autumn Agricultural Exhibition just moments ago. I began my remarks there with greetings on the Agriculture and Processing Industry Workers’ Day, which is marked in Russia on 13 October. The next red letter day is 16 October, World Food Day. It has come to symbolise our common struggle against hunger, malnutrition and poverty and to remind us that we should come together to address the issue of food security at every level, be it a region, a country or the planet as a whole. I am convinced that this forum will be able to contribute to the settlement of these global problems.

We can see that there are very many inconsistencies and contradictory views on the current situation and prospects in the global food market. On the one hand, experts say that agribusiness has a negative impact on climate change. On the other hand, they say that climate change is increasing farmers’ costs and forcing them to use increasingly intensive agricultural methods. In fact, these processes run contrary to or contradict each other. There is a growing number of such more or less irreconcilable contradictions. We must find balanced solutions. I would like to say that Russia is ready for international cooperation in this sphere.

We are aware of our responsibility for the environment and have always made an active contribution to the formulation of the global agenda, including on climate change within the framework of the Kyoto Protocol, the Paris Agreement, which Russia has recently ratified, or UN-led international projects, such as the Global Soil Partnership and a number of other agricultural and food security projects.

Russia has unique natural resources, including in agriculture. We have 20 percent, or one fifth, of the world’s fresh water, 9 percent of arable land and some 60 percent of the planet’s black soils.

Of course, agriculture has been a priority industry in Russia historically. This is our position of principle. We are investing a great deal of money in agriculture. It is, in part, thanks to this large-scale support (amounting to 308 billion roubles in 2019) that our agricultural industry has reported major achievements in the past few years.

This year was no exception in this regard. 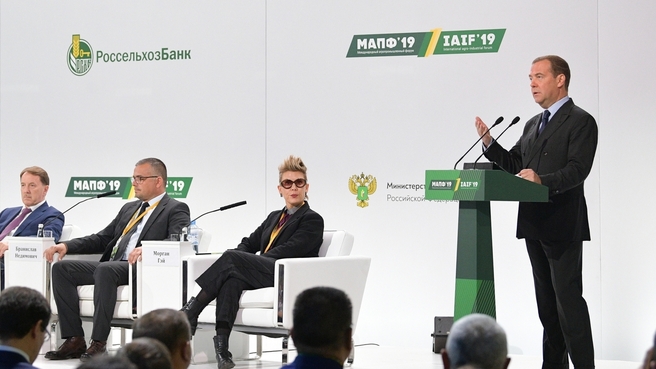 According to preliminary estimates, we will have a very good crop harvest. We discussed the harvesting campaign at a Government meeting last week. It is clear that this year the harvest will be better than last year. The approximate estimated figure is clear: the farmers have gathered in over 115 million tonnes of grain. This is very good, because grain is one of our main export products.

There is also an increase in other products.

We are steadily increasing the exports of agricultural products and food. Last year, Russia was the world’s leader in the export of grain: about 44 million tonnes.

There is also a rise in the export of other products: fish and sea products. Over the nine months of this year, these exports accounted for about $3.7 billion.

There is a demand on the global market for our foodstuffs, the production of which is increasing. The export of oil is also growing. This means that the implementation of the federal project on the exports of agricultural products is going well.

Being an active participant in the global food market and a large food exporter, Russia cannot avoid the need to adequately respond to new challenges.

What should be done, how must we act in the conditions of the 21st century?

People whose job is connected in one way or another with agriculture have gathered here. As you know very well, traditional agriculture has changed drastically. The usual methods, involving excessive amounts of fertiliser and energy-consuming equipment, are not always effective, not only because such an agro-industrial sector is not environment-friendly. The main thing is that people want to buy environmentally-friendly, organic products, despite the fact that they are more expensive. A new nutrition culture has been born, where the quality of food and the way it is produced are as important as the quantity and diversity.

Of course, this opinion is more widespread in well-developed countries with relatively high levels of income. But the ideas of a healthy diet, on which the concept of organic food is based, are becoming more popular in Russia and all around the world.

This is why we must continue to improve the quality of agricultural products and food, taking into consideration the new environmental standards and, of course, people’s demands.

We are working on this systematically in several spheres.

First, we continue to actively implement the principles of the rational use of natural resources, which maintains the balance between the needs of the agriculture sector and environment protection.

We are already working towards forest restoration and conservation of unique natural sites as part of the Environment national project.

As for the agro-industrial sector, we are focusing on the agricultural lands reclamation. We are allocating quite a lot of money for this, because previously, some time ago, these processes did not receive enough funding. This money is used for hydrotechnical melioration, protection from wind erosion and desertification and a number of other activities.

Second, we are introducing modern regulations for organic products.

The new legislation will come into force on 1 January 2020. It includes a definition of organic products and sets out the national standards for organic production in Russia. It also stipulates the compilation of a register listing organic producers and providing information about them. This will facilitate the marketing of organic products both in Russia and abroad. Of course, we must also improve quality control.

Another sphere is the digitalisation of agriculture. We have just now discussed this subject with the FAO Director-General, who is attending this forum.

Regarding digitalisation, a modern high-tech environment must be created for everyone in the agro-industrial sector so that the farmers have the opportunity to receive information in electronic form. This is necessary not only for industrialised countries, but also for the countries where the standards of technological development are below the required level.

Contacts with the authorities must be simplified, and, of course, a detailed database must be created about the situation in the agricultural industry as a whole. It must include both large companies and small farms, which together constitute agriculture.

We are working on this within the framework of the Digital Economy National Programme. 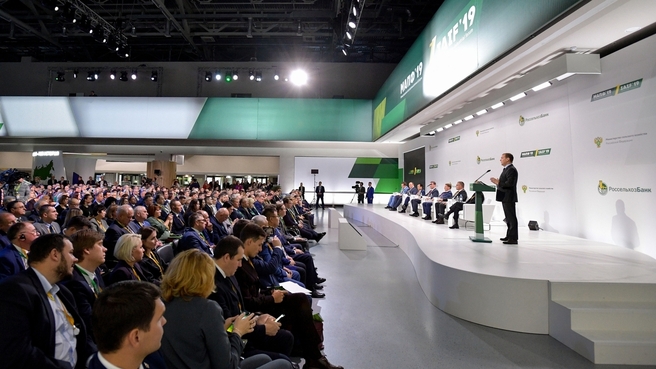 Last century, breakthrough achievements in the agriculture industry were hailed as the Green Revolution. That revolution has changed the lives of very many people. But our goals in the 21st century are different. We are creating so-called green brands. We are learning to combine intensive agricultural production with modern technology and environmental protection. We are closely monitoring production, marketing and consumption, a task which is no less challenging than the ones we had in the 20th century. Not to mention the fact that there are still places around the world were people starve or do not have enough to eat. We cannot remain indifferent to this; we must join forces with other countries to find a solution to this problem in the 21st century.

Thank you. I wish your forum every success.

The meeting was held via videoconference.
1
Show More