Dmitry Medvedev spoke at the opening of the 26th annual shareholders’ meeting of the African Export-Import Bank and met with the Bank’s President and Chairman of the Board of Directors Benedict Oramah. 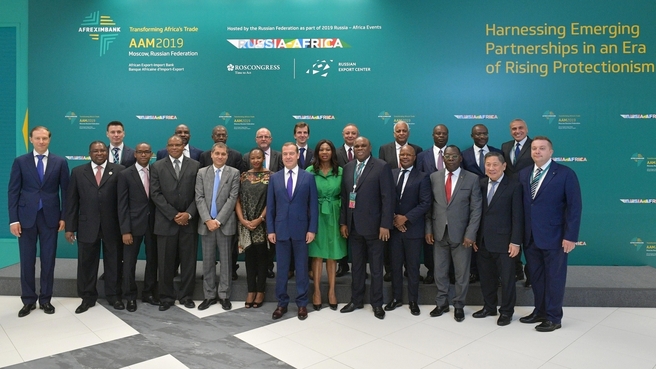 The African Export-Import Bank is a supranational financial institution bringing together the majority of African countries (51 states). The bank aims to expand and incentivise trade between African countries and outside the continent. Russia became one of the bank’s shareholders in 2017.

The annual shareholders’ meeting is traditionally attended by Africa’s political and business leaders. The African continent’s states see the meeting as one of the most important economic events. This will be the second meeting outside Africa; China hosted the first such meeting in 2012.

Dmitry Medvedev’s remarks at the opening of the 26th annual shareholders’ meeting of the African Export-Import Bank: 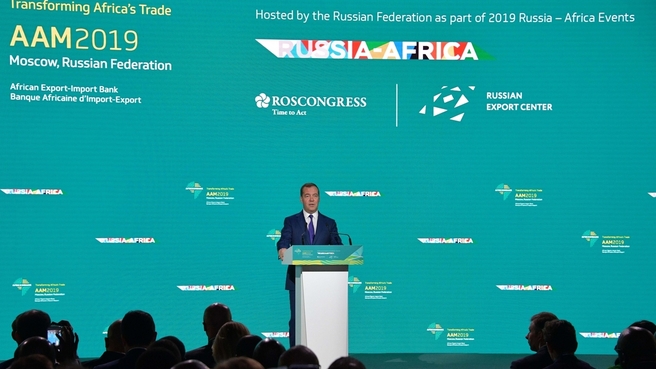 I am delighted to welcome the participants in the Russia-Africa Conference and the general meeting of shareholders of the African Export-Import Bank, a leading regional financial institution. This is only the second meeting of the Bank’s shareholders outside the African continent, and we are particularly pleased to host such an impressive event in Moscow. We did our best to ensure a high level of organisation and even to provide African-style weather.

Russia and African countries are bound by friendly relations and partnerships that have a solid historical foundation. But with all due respect for the past (and we must remember it), it is much more important to look into the future, forward, to jointly make various plans and to implement them together. I am convinced that this new agenda of Russian-African cooperation is predetermined by objective factors. First of all, by the transformation of the current system of international relations and global trade.

Globalisation and new technologies have shifted economic growth centres to the emerging economies and developing countries. The number of active international players has increased, and competition between them has intensified. To retain their leading positions, former free trade advocates often use non-market methods of competition ranging from protectionism to trade wars. This explains the instability of goods and commodity markets, the global financial system, greater debts and inequality, including economic, social, technological and digital inequality. You know all this very well.

We suggest that we search for answers to these challenges together. Especially if Russia and African states have similar approaches to addressing global problems. We share the opinion that there must be common rules of the game in international affairs, and we recognise the leading role of the UN and the UN Security Council. Russia appreciates the position of our African partners who distance themselves from anti-Russia attacks (you know very well that there are many such attacks today) and support the idea of expanding the share of developing countries in global governance institutions. I am talking about the reform of the International Monetary Fund and the World Bank Group. It is difficult to accomplish this because of the well-known position of some states, but it must be done all the same.

Another objective reason for our rapprochement is the similar tasks facing our economies. Russia and all African countries have tremendous natural resources. According to some estimates, they account for 50 percent of the planet’s resource potential. We must use these resources effectively and simultaneously expand cooperation in this and other fields.

Africa is moving confidently forward in these directions. Over the past few years, the continent’s economic growth rates have been steadily exceeding the average global growth rates. Experts predict that the total GDP of African countries will reach $2.6 trillion by 2020. It is also very important that the continent’s business climate is improving thanks to improved legislation, the introduction of best practices, changing economic structures and a growing domestic market.

All this has already made Africa highly popular with investors. Apart from the mining sector, this also concerns cutting-edge technology and telecommunications, and this is particularly important. The Russian business community is involved in these projects. Such Russian companies as Rosoboronexport, the Korolev Rocket and Space Corporation Energia and the State Development Corporation VEB.RF are establishing the national satellite communications and television broadcasting network. The Rosatom State Atomiс Energy Corporation is discussing a number of nuclear energy projects with several countries. At the same time, Russian companies are working successfully in the African mining sector. Russia scaled down its presence in the 1990s, but we have now started implementing some successful joint projects in the field of geology, the mining industry, the energy sector, manufacturing, agriculture and the fisheries sector.

We must take advantage of all of these things without fail.

It is also important that we implement as many of these projects as possible, that they encompass new venues and, of course, new countries. As we see it, the Russian Export Centre, which owns a large stake in the African Export-Import Bank, has a special role to play here. Today, the Russian Export Centre and the African Export-Import Bank are working on about ten promising Russian-African projects.

At the same time, there are not enough economic prerequisites for attaining a new quality of cooperation. It is also important to have a sincere desire. The Russian Federation and African countries now have this sincere desire, and I would like to specially mention this here today. We can see this at various levels, including high-level and top-level cooperation. The heads of four African states have visited Russia in the past few months.

The business community is also interested in expanded cooperation. This is confirmed by the growing trade between Russia and African countries. Although it increased by 17 percent last year, this is not enough yet, and more active efforts are needed.

We are expanding cultural and humanitarian ties in line with international efforts to facilitate Africa’s comprehensive development and in the bilateral format. Educational projects are particularly important. Today, 17,000 African students are studying in Russia, and I hope that this figure will also increase.

Friends, of course, we can achieve more in all areas. We simply need to know each other better and be more open to one another. This is the purpose of our conference. We see it as a key stage in detailed preparations for the Russia-Africa summit, scheduled to be held in October in Sochi, Russia.

President of Russia Vladimir Putin and the incumbent African Union Chairperson, President of the Arab Republic of Egypt Abdel Fattah el-Sisi, will chair this first full-format summit in history. The leaders of most African countries and the heads of regional organisations have confirmed their readiness to take part in the summit. Indeed, this will be a truly momentous event. We believe that it will usher in a new era of Russian-African cooperation, as I have noted earlier.

I am sure that all of us will succeed if we work this way. Even if some things seem impossible, this situation persists only until it has been accomplished. It was Nelson Mandela who made this absolutely true statement. So I wish the conference participants mutual understanding, useful discussions and cooperation. Have no doubts, the Russian Government will do everything possible to expand our cooperation. 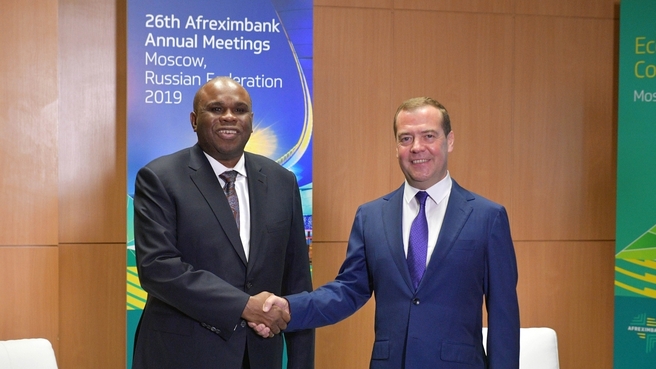 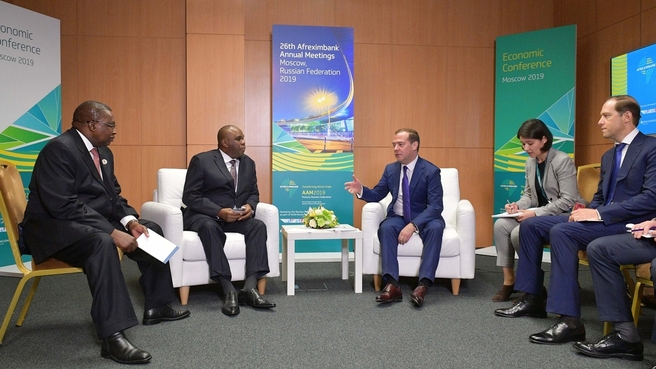