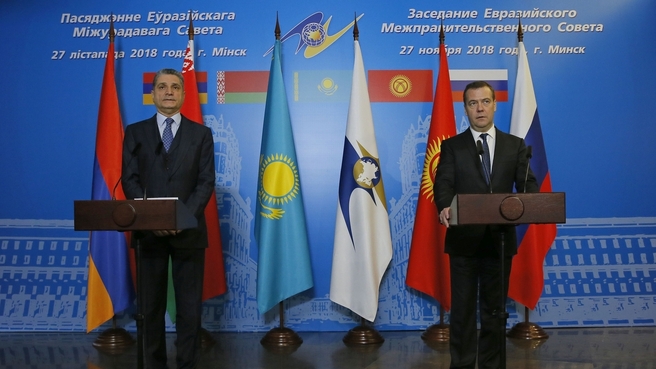 Dmitry Medvedev: We have completed a regular meeting of the Eurasian Intergovernmental Council. Let me, once again, thank our Belarusian friends for their heartfelt welcome and well-organised event. This is a difficult job and we do it through discussion, so good conditions are needed.

Today we discussed strategic directions, specific matters regarding the development of the Eurasian Union. Let me point out again, that generally, fairly good economic indicators have been achieved and common markets are being shaped within the parameters and in the areas that are stipulated in the EAEU founding treaty. A case in point is the growth of internal and external trade. This creates conditions that encourage companies to invest in new projects. And this, on the whole, increases the practical output of integration.

In a time of tremors on international markets, trade wars that are being waged today in various countries, using various methods and on various markets, the value of our integration-based association, in this sense, increases, because we act according to common rules, trying to achieve common results, allowing our economies to develop and our businesses to make investments. All this is valuable in an era of instability in the world trade system.

Regarding the outcomes, we have taken decisions on certain industries, they are all known. There are difficult issues which require more work. They include establishing a common oil and gas market, and work on the design of the Union’s financial market. We have agreed that we will combine our efforts in this area.

The Eurasian Commission reported on the results of work to remove various restrictions and barriers in the Eurasian Union’s market in 2017–2018. We are overseeing this work. The countries always have reciprocal claims here which is hardly surprising. The only way to somehow sort out this backlog is to make certain compromises and consistently work to lift various restrictions and barriers that stand in the way of our common economic market’s progress.

We have begun work on forming the foundations of the Union’s digital economy. It is one of the major areas of our activities. Unlike other areas where countries can advance at different speeds, in my view it is impossible to move at different speeds on digital.

Either we all go digital or one country or another will be sidelined and will not be able to participate in transactions at the interstate level or at the business level. Either that or we will all have to go back to the past and give up the advantages of the digital agenda. This is why we must move in unison on the digital agenda.

We selected eight projects. Two dozen more, as I have already said, are under review. We hope more favourable conditions will be created to carry out those initiatives. We have agreed today to draft a concept for applying special regimes called “regulatory sandboxes.”

Also, joint forecasts for the development of the agricultural industry have been considered today, including an assessment of the demand for and production of particular produce, foodstuffs. We have agreed to encourage the production and use of electric vehicles. We have discussed a draft budget. Overall, all the decisions that were to be signed have been adopted. I expect this will create good conditions for celebrating the 25th anniversary of the Eurasian project and the fifth anniversary of signing the Union Treaty. A special programme was devised for celebrating the event. We have approved it today.

Let me thank our Belarusian colleagues again for organising the work and let me state that I think that on the whole we did a good job.

Tigran Sargsyan: Usually, at the prime minister level, we bring up issues that require the coordinated positions of our national governments and on which sharp discussions unfold. Today’s agenda is no exception. Agreements were reached today on a number of conceptual matters on the creation of common markets, which will enable us to push these matters forward at the board level. Mr Medvedev mentioned the items that were debated today. But the main thing is that we managed to reach agreements on how we will push these matters forward. We will prepare some of these items and we will inform the presidents at the Supreme Council. A meeting of the Supreme Council will take place in St Petersburg in early December, and all the matters that we agreed on today will be submitted to the presidents as well. All the matters that Mr Medvedev mentioned will be on free access, so you can take a detailed look at the decisions we adopted. We were very productive today, which will enable us to advance our integration project considerably.

Question: Mr Medvedev, did you discuss the incident in the Kerch Strait with your colleagues today? What do you think about this and how do you see the incident?

Dmitry Medvedev: We did not discuss any incidents today because the Eurasian Commission’s agenda is about entirely different matters. This is a bilateral issue. Clearly, this is not a topic for discussion in Minsk.

But I can give an opinion on this. My thoughts are fairly simple.

Some Ukrainian analysts warned as far back as a year ago that events might take a similar turn, considering how the election campaign was going in Ukraine. It is obvious that, given the current situation, incumbent President Poroshenko has no chance to win the election and, perhaps, has no chance to even make it to the second round. Therefore, in order to achieve a certain political outcome benefiting the incumbent president, that provocation was committed. The result is the introduction of martial law that enables the current authorities to do a little muscle-flexing and earn more popular support – this is one of the possible versions. Or, perhaps, the maximalist version was attempted – I mean cancelling the elections, something that Ukrainian analysts also warned of around a year ago.

It is worth mentioning the reaction of the Ukrainian establishment, Ukrainian political figures, including ex-presidents, who asked a question that, in my opinion, is obvious: why was martial law not declared in far more complicated situations that the Ukrainian state has found itself in, while this particular incident was used as the basis for imposing martial law? The answer is also quite clear. Because this is politics, election tactics or political tactics. That is precisely how it has been perceived inside Ukraine itself and how I perceive it. Evidently, this will further complicate the processes unfolding in Ukraine. This will create or might create serious problems for the Ukrainian economy and, certainly, it does nothing to improve relations between the Russian Federation and Ukraine.

All the other assessments were given by the Ministry of Foreign Affairs and other agencies that have already commented on this very unfortunate incident.