The Al-Akhbar newspaper published an article by Dmitry Medvedev ahead of the Prime Minister’s visit to Morocco.

As I’m about to begin my visit to the Kingdom of Morocco, I would like to take this opportunity to share some thoughts about what your country means for Russia, the current state of bilateral relations and their future. 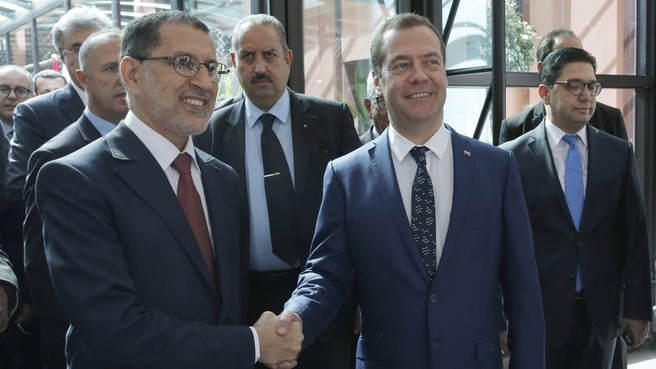 Our two countries are separated by thousands of kilometres. However, you can hardly find anyone in Russia, even among children, who wouldn’t be aware of Morocco’s existence. Above all, this is because of the elegant diamond-shaped stickers with Maroc inscribed on them, which several generations of Soviet and then Russian children found on oranges and tangerines. These fruit arrive at our stores in the cold Russian winter, which makes them even sweeter for us. Having them on the table during the New Year feast, the most popular celebration in Russia, has become a tradition for many. For this reason, it is not surprising that this diamond has come to symbolise Russian-Moroccan friendship and a sign of the positive attitude and sympathy for your country.

Of course, with the advent of new technology distances have become less of a barrier for intergovernmental relations and people-to-people ties. However, distance has never been a major factor for the relations between Russia and Morocco. Both of our countries have a long and complex history, and went through a number of challenges in the 20th century. Even today, the world we live in is complicated. Looking back, we have every reason to say that in all instances we always sought to engage in dialogue guided by the principle of mutual respect and taking into account each other’s interests. There has always been a special chemistry in our relations, and the relations never took on an adversarial dimension.

Russian-Moroccan ties have a long history. Back in 1777, Sultan Mohammed Ben Abdellah al-Khatib offered Russian Empress Catherine the Great to establish contacts and trade between the Russian Empire and the Sultanate. Truth be told, it took 120 years before a Consulate General of the Russian Empire opened in Tangier, headed by experienced diplomat Vasily Bakherakht. Morocco was the first Arab country to establish diplomatic relations with Russia. What an impressive and powerful story! Next year, we will celebrate 120 years since the establishment of diplomatic relations between Morocco and the Russian Empire.

These were challenging times for jump-starting official relations. At the turn of the 20th century, strategic territories in Northern Africa were at the confluence of geopolitical interests of the great powers. The Moroccan Crisis filled the headlines. Russia has been always interested in strengthening Morocco’s independence. By the way, the Soviet Union was consistent in following this line, supporting the people of Morocco in their fight for liberation from colonial rule.

The visit to Russia by His Majesty the King Mohammed VI of Morocco in 2002 marked a new stage in our bilateral relations. It was then, 15 years ago, that the two countries signed the Declaration on Strategic Partnership. In September 2006, President of Russia Vladimir Putin paid an official visit to Morocco. The visit by His Majesty to Russia in the spring of 2016 marked a milestone in our relations. Building on the 2002 Declaration, the two countries adopted a Statement on the Extended Strategic Partnership, affirming their commitment to further broadening bilateral ties in all areas and coordinating international and regional initiatives with a view to settling conflicts and crises.

The main purpose of my visit is to further enhance trade and economic ties in all areas and promote cooperation on the sectoral level. Of course, we will also discuss topical international and regional issues of mutual interest.

Morocco is one of Russia’s leading trade partners in Africa and the Arab world. According to Russian customs statistics, in 2016 trade increased by 27.2 percent. Russia has long been a major energy exporter for Morocco, and also exports wheat, ferrous metals, fertilisers, sulphur and other goods.

Our countries promote cooperation not only in traditional, but also in new areas by making use of new technology, which has special significance. The recent initiatives that caught my attention include an innovative project by VIST Group, a resident of the Skolkovo Foundation IT cluster, to implement an automated management system for mining complexes using GLONASS technology and KARIER Mine Fleet Management System for Morocco’s Office Chérifien des Phosphates (OCP Group), the operator of Mera El Arech, a major phosphate deposit in Khouribga. This project is expected to cover OCP’s other mining facilities in Morocco.

Moroccan resorts are becoming increasingly popular among Russian tourists, who do not need a visa to travel there. According to Rosstat, Russia’s State Statistics Agency, more than 33,000 Russian tourists visited Morocco in 2016, a four-fold increase compared to 2015 (8,000 people). Of course, these figures remain quite modest, but there is clearly a lot of room for development.

It is important that we keep up our efforts in promoting our relations in order to find new promising areas for expanding cooperation and benefit from the existing potential of cooperation. We have everything it takes to achieve this objective, including the Intergovernmental Mixed Russian-Moroccan Commission on Economic and Scientific-Technical Cooperation, an effective mechanism for promoting business-to-business ties. It held its sixth meeting only recently, in July 2017.

Business associations are an important and driving force in promoting economic relations between our countries in all areas. It is gratifying that the interest in business-to-business cooperation has been on the rise in recent years. The latest example is the major economic forum, Russia-Morocco: Effective Strategic Partnership, held in September 2016 in Agadir. More than 300 business people from both countries attended the forum. Russian companies will take part in a business mission on the sidelines of my visit. I hope that this mission will contribute to our efforts in this area.

I would like to lay a special emphasis on our consistent efforts to upgrade the legal and contractual framework of our bilateral cooperation. Over the past decade, more than two dozen documents were signed on the state, governmental and interagency level. During my visit to the Kingdom, new cooperation agreements are expected to be signed, including instruments on customs operations, agriculture, cultural and industrial cooperation.

Russia highly values Morocco’s independent and constructive stance on topical international issues, above all those related to the Middle East and counter-terrorism efforts. Russia supports efforts by the Moroccan leadership in countering extremism, maintaining and strengthening harmony in society, including in social and political, as well as economic and cultural affairs.

There is great potential for cooperation between Russia and Morocco. We must do everything it takes to make full use of the opportunities we have.

In conclusion, I would like to refer to something that symbolises Morocco in the minds of many Russians. It is in your country that Casablanca, a masterpiece of 20th century cinema, unfolds. Any movie buff knows the final line of this outstanding film: “I think this is the beginning of a beautiful friendship.” Russia’s friendship with Morocco started a long time ago, and we have every reason to believe that it will strengthen further and develop for the benefit of the people of the two countries.

30 June 2022 Alexander Novak holds 30th ministerial meeting of OPEC and non-OPEC countries The parties to the agreement retained the agreements reached earlier on increasing oil production at the level of 648,000 barrels per day in August.
30 June 2022 Government meeting