Dmitry Medvedev meets with Zinaida Greceanii, Chair of the Party of Socialists of the Republic of Moldova 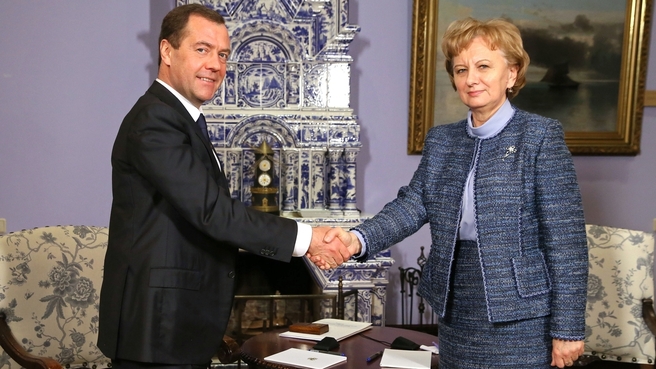 Meeting with Zinaida Greceanii, Chair of the Party of Socialists of the Republic of Moldova

Dmitry Medvedev: Welcome, Ms Greceanii. Congratulations on starting your party career, although it is always a complicated endeavour that requires significant energy. Nonetheless, the fact that you have become head of the Party of Socialists will, hopefully, help address not only party issues, but also a number of major economic issues facing your country.

We worked with you when you headed the government. Let’s face it, relations between the Russian Federation and the Republic of Moldova are not the best at the moment, but we have the opportunity to improve them, and do so not only at the state and government level, but also on a party-to-party basis. As chairman of the United Russia Party, I believe that it would be good for promoting party-to-party dialogue. We can have our colleagues talk on a variety of issues at the party and the parliamentary levels. Perhaps, we should think about drafting an agreement on cooperation between our two parties, as we do with other parties with which United Russia has good relations. I wish you every success.

Zinaida Greceanii: Thank you very much, Mr Medvedev, first of all, for meeting with me today. It is important. Indeed, I’ve been leading the Party of Socialists since December. As you are aware, the Party of Socialists candidate won the presidential race. Under Moldovan law, the President cannot be a member of a party or lead any political party. So we had a Party of Socialists convention in December to hold elections. United Russia was represented by a delegation headed by Deputy Chairman of the State Duma Vladimir Vasiliev. This is a great source of support for us.

As you may be aware, the Party of Socialists won the parliamentary election with a majority of votes in 2014. Today, we have the largest representation in the parliament, but our opponents joined together and formed a parliamentary majority. Today, we are in the opposition, but managed to win the presidential election nonetheless. Igor Dodon has become President. At the invitation of Vladimir Putin, he paid an official visit to Moscow.

We won because the majority of Moldovans are for strategic partnership with Russia. In 2014, our current pro-European coalition in the parliament signed an agreement on association with the European Union, and, frankly, we got almost nothing in return from the European Union, while sustaining a major economic setback by losing the Russian market and our strategic partner. This is what happens when politicians who try to destroy age-old ties and traditions between our peoples come to power.

Moldova greatly appreciates Russia’s position that Moldova must be a sovereign and independent country. We will work to this end. Igor Dodon received full support from Vladimir Putin during their meeting. Your party boasts enormous political experience, and we receive support from it as well. We are working with our colleagues in the State Duma, and also at the party level, but your suggestion to sign a formal agreement is a great source of political support for us. Thank you.

Dmitry Medvedev: Well, we're the leaders of major political parties, so we should not only have good informal relations, but good official relations as well. Let’s do it.