The theme of the 2017 Gaidar Forum is «Russia and the World: Setting Priorities». 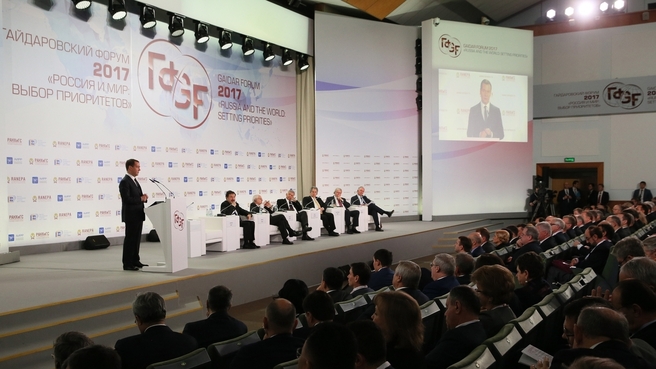 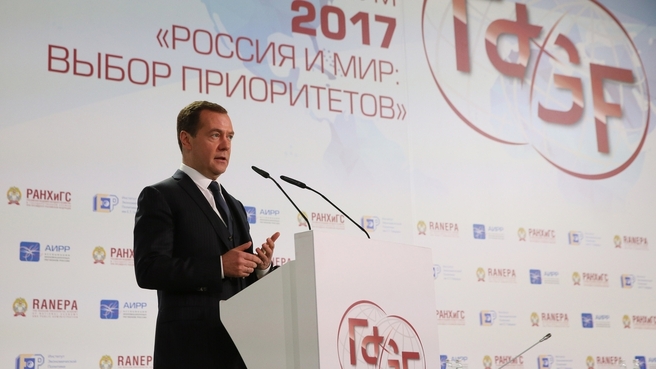 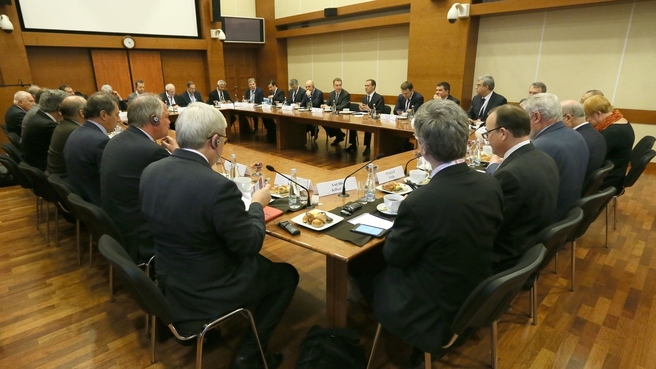 The Gaidar Forum is an ongoing project for discussing topical problems of our time. The forum was first held in 2010 and is dedicated to the memory of Yegor Gaidar, researcher, economist and ideologist of Russian reforms of the early 1990s. The forum’s discussions center around topics concerning Russia’s status and strategic role in the world. The forum aims to attract the world’s leading researchers and professionals to a debate on current economic and political issues, to maintain expert dialogue on key political and economic themes, to reflect on the basic trends and key events concerning domestic and global economy and politics, and to draft strategic proposals and recommendations on Russia’s economic development.

The forum organisers include the Russian Presidential Academy of National Economy and Public Administration (RANEPA), the Gaidar Institute for Economic Policy (Gaidar Institute) and the Yegor Gaidar Foundation.

The theme of the 2017 Gaidar Forum is “Russia and the World: Setting Priorities.”

Excerpts from Dmitry Medvedev’s remarks at the forum’s plenary session:

Every country is special in its own way and faces challenges of its own, which means that every country should come up with its own solutions free from the tyranny of experts seeking to shape economic policy in specific countries in line with their universal recipes. However, despite all the differences in the economic situation in Russia and other countries, we cannot fail to see that many challenges are relevant to all of us.

Long-term stagnation is one such risk. It is already clear that monetary policy alone is not enough to put economic growth back on track. What is needed is serious structural reform.

Dmitry Medvedev: “Now that the prices of raw materials are low, we need to reform the economy, which is dominated by the resource sector and is therefore vulnerable. That said, all our restructuring decisions must be as balanced and accurate as possible and complemented with the necessary stabilisation and support measures.”

For all the differences between countries, the priority development areas are almost identical. They have to do with human capital, primarily in terms of education, healthcare, improving the business climate and infrastructure development.

Russia has weathered the crisis better than many expected, but this does not mean that all the problems we faced are behind us. The Russian economy has the potential to grow at the rate of 3.5-4 percent. The question is how this potential can be unleashed. The Government is currently working on a plan of action to boost economic growth so as to surpass the global average growth rates in the foreseeable future.

The economy should be reformed away from its current dependence on commodities. We have outlined 11 priority areas for the years to come, and are active in switching all government initiatives to a project-based approach, which provides for better allocation of funds and enables us to move forward at a faster pace. These priority projects include so-called life projects aimed at developing healthcare, education, improving housing and utilities and resolving environmental issues.

Dmitry Medvedev: “The ongoing transition to digital economy will force us to review the role of the state in economic management. The system of state governance must be adjusted to the object to which it is applied, primarily in terms of the speed of decision-making and the quality of decisions. To be effective in a digital economy, government agencies must be small and as adaptable as possible.”

There are also projects that seek to facilitate growth in areas like housing construction, export support, improving labour efficiency, promoting small and medium-sized enterprises and self-employment, improving supervision and oversight, developing road infrastructure and reforming single-industry cities. All these initiatives are aimed at encouraging business activity and economic development.

There are still many obstacles that we must overcome in order to achieve acceptable growth rates. I am primarily referring to the shortage of investment and the lingering “paralysis” of loans.

It is necessary to continuously upgrade technology and professional skills.

It is also necessary to develop competition, reduce the state’s excessive presence in the economy, enhance the investment appeal of the regions and seriously rebuild the government management system.

Sharp politicisation of international economic relations is a major feature of the modern economy, which concerns everyone. A strong-arm approach, sanctions that are always at variance with economic considerations and politically motivated barriers in the way of mutually beneficial projects are continuously generating tensions in the world.

There is another long-term, fundamental trend in the global economy. Commodity markets and whole industries are becoming increasingly integrated and mutually dependent. The way new technology united the global economy and the opportunities opened by the new technological wave, the so-called fourth industrial revolution, are making it abundantly clear that the global character of the economy is intensifying.

There is no need to save globalisation. If politicians do not actively meddle in it, it is fully capable of rescuing itself, using new mechanisms of global governance, such as the G20, which is increasingly replacing the G7 and the G8. Russia does not want to and will not isolate itself. We are not going to ignore global trends. Our goal is to use them to the maximum extent possible for resolving our own tasks.

We are motivated to promote international trade, create our own added value chains and take a more active part in foreign trade unions and agreements.

The ongoing transition to digital economy will force us to review the role of the state in economic management. Modern business is developing at cosmic speed. Such qualitative changes must necessarily be considered in reforming the state machinery. It is necessary to step up the digitalisation of the public sector. We must learn from those who are in the lead in this area. This is our plan and we will continue pursuing it.

Safety measures during arrivals from abroad were discussed, including organising a system to collect data on incoming citizens and monitoring their quarantine.
31 March 2020 Meeting on economic issues

The readiness of regional and federal hospitals to admit coronavirus patients, as well as the creation of information systems to monitor self-isolation compliance were discussed.
30 March 2020 Meeting with deputy prime ministers

Measures to prevent the spread of the coronavirus in Russia and reduce its impact on the economy.
1
Show More