The theme of the 2016 Gaidar Forum is “Russia and the World: Looking to the Future.”

The Gaidar Forum is an annual international academic and practical conference in the field of economic policy. It was first held in 2010 in memory of Yegor Gaidar, an outstanding academic and economist and the architect of Russian reforms of the early 1990s. The forum is usually focused on Russia’s standing and strategic role in the world.

The forum provides the world’s leading researchers and experts with a venue for discussing economic and political issues and aims to maintain expert dialogue on key political and economic issues, to reflect on the basic trends and key events concerning domestic and global economy and politics, and to draft strategic proposals and recommendations on Russia’s economic development.

The forum organizers include the Russian Presidential Academy of National Economy and Public Administration (RANEPA), the Gaidar Institute for Economic Policy (Gaidar Institute) and the Yegor Gaidar Foundation. 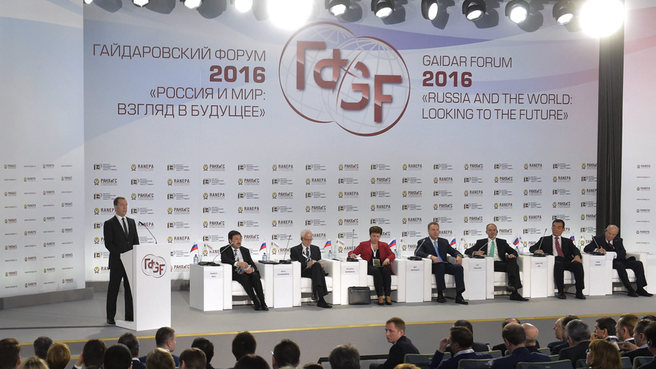 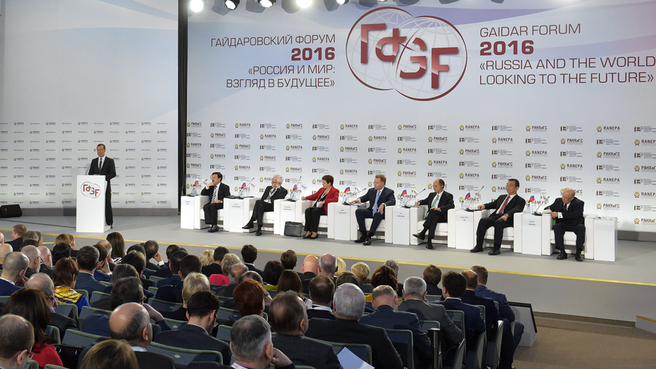 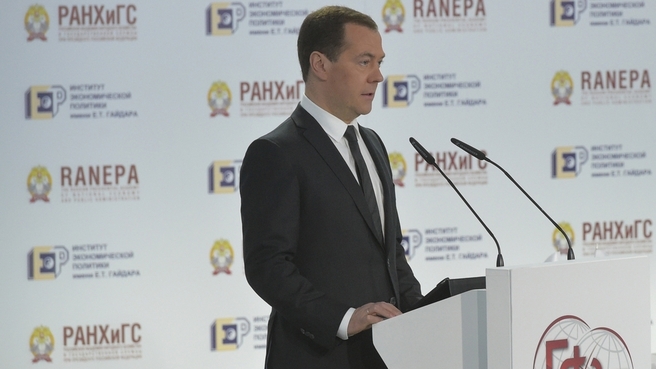 The past year was difficult, possibly the most difficult year in a decade. It has been a long time since our economy encountered a set of major challenges such as plunging oil prices, the pressure from sanctions and the nascent change in the global economic paradigm.

A number of basic principles of the global economy and its key institutions have become unbalanced, and we are yet to determine whether it is a temporary imbalance or the time has come to formulate new rules of coexistence.

The traditional formulas are no longer effective, and the accepted systems of regulation are malfunctioning. Structural problems are facing not only the emerging but also the leading economies, and not only the commodity-based economies but also the consumers of energy resources. A relevant example is the oil market, where supply was larger than demand in 2015 while production continued to grow. The traditional tools of coordinating the price policy, for example through OPEC, have failed to restore the balance, and even the current situation in the Middle East has had little effect on it.

Politics and geostrategy are dictating conditions to the economy. The accepted rules are disregarded or adjusted, sometimes for conformist reasons as the International Monetary Fund has done with regard to Ukraine.

Evidence of this is the economic sanctions against Russia. The fact that they have been applied by some countries is dramatically undermining the prestige of market institutions such as the World Trade Organisation.

Political considerations are being increasingly applied in the sphere of competition, as evidenced by penal sanctions. This instrument is often used against those who refuse to comply with the decisions of one member of the economic process, even if it is the largest member.

Dmitry Medvedev: "We will take vigorous measures in the sphere of social protection that will be adequate to the current situation."

Russia’s structural problems have escalated against this backdrop: we are facing an obvious shortage of resources for economic growth and of export revenues in the non-commodities sectors.

A combination of these challenges last year resulted in declining production and business and investment activity. But worst of all, it has decreased people’s incomes.

Over the past 15 years, we have reduced the poverty rate by half. It was our deliberate policy to invest primarily in the social sphere, even to the detriment of structural reforms. The prosperity of our people grew faster than economic modernisation.

We will take vigorous measures in the sphere of social protection that will be adequate to the current situation.

We will continue focusing on the employment market, primarily by helping the key regional companies and organisations in transport, mechanical engineering, housing construction, and the automotive and light industries.

These and other measures should propel us towards one of our key objectives, which is to reverse the decline in living standards. But the main method of achieving this objective is to ensure sustainable economic growth.

The economic situation is not simple but manageable. There are several nascent positive trends, which we will be working to strengthen this year.

Russia is one of 10 countries with the smallest sovereign debt and the largest gold and foreign currency reserves. The rouble deposits of individuals and companies increased last year, despite fluctuating currency rates and high inflation. They did not get rid of roubles, and the volume of capital flight has decreased by half.

Dmitry Medvedev: "The economic situation is not simple but manageable. There are several nascent positive trends, which we will be working to strengthen this year."

Our banking sector has been working steadily, and the Central Bank has been pursuing a consistent policy to streamline its operation.

Measures taken to increase the authorised capital of our banks have proved effective: we have invested approximately 1 trillion roubles in them. Loan activity is gradually rebounding, and the outflow of deposits has given way to the inflow of money.

We will continue using such instrument as the subsidised interest rate. Also, we will continue supporting select investment projects that use project finance arrangements.

In cooperation with the Central Bank, the Government is drafting proposals to develop a corporate bonds market. One of these proposals is to exempt coupon profit from taxation, including from individual income tax.

Accumulated reserves made it possible to balance the federal budget for the current year. However, if oil prices continue falling, budget parameters will require adjustments. We must be ready for the worst-case scenario. The main task now is to choose the best form of streamlining the budget.

Some branches of the economy have become more productive. In a sense, the conditions for re-industrialising the country have even improved. Russia is recovering from the Dutch disease when the unduly strong national currency makes domestic industrial products uncompetitive. Russian metallurgical companies have one of the lowest production costs in the world. Agriculture, the chemical industry and mechanical engineering are all steadily growing.

We’ll continue implementing industry-specific plans on import substitution. We’ll top up the capital of the Industry Development Fund by another 20 billion roubles. We are also introducing special investment contracts as an incentive.

We’ll focus on competitive companies and withdraw support from those that will never make it.

The Russian economy has shown that market mechanisms are stable enough even when Western partners apply political rather than market methods against it.

Our economy is coping with the absence of the formerly powerful inflow of oil-and-gas revenues. The structure of the federal budget registered a small shift towards the prevalence of revenues that are not directly linked with the oil-and-gas sector. Last year non-energy exports were gradually growing both in scale and value.

We must fully unleash the integration potential of the Eurasian Economic Union, establish free trade areas with leading foreign contractors and develop advanced economic partnerships within the SCO and with ASEAN states. We will proceed in this area following the universal rules of the WTO and will not form membership clubs with their own rules of the game, ignoring the interests of other participants in the world economy and trade.

We are ready to restore normal cooperation with EU countries as well. Europe is our next-door neighbour and a major economic partner. In the end common sense will triumph, sanctions will become a thing of the past and Russia-EU relations will return to normal.

Dmitry Medvedev: "Promotion of investment remains the main factor in restoring economic growth. Given weak private initiative, reduced demand, external shocks and other risks, the government can and must be more active in countering investment decline."

The current drop in commodity prices is often compared to the crisis of 1998 when oil prices dived by about 60 percent in two years, and industry collapsed by 40 percent. Nowadays oil prices have dropped even more and faster as compared with the maximum of several years ago – almost six-fold. Sanctions are not making our life easier either, but we are nowhere near to what was happening in the economy in 1998. The crisis has gradually cured us from the habit of relying primarily on hydrocarbons.

We are actually creating a new model of economic growth. We have regions that can live without incomes from energy exports. They invested in the modernisation of production capacities in due time and effectively, found investors, built new plants and developed the manufacturing of products with higher added value.

Promotion of investment remains the main factor in restoring economic growth. Given weak private initiative, reduced demand, external shocks and other risks, the government can and must be more active in countering investment decline. But the government can never do as much as private initiative in this respect. No structural changes can be achieved without the active involvement of business people in import substitution, without their investment in infrastructure and innovation projects, without the development of small- and medium-sized businesses and the introduction of new technology.

We have been drafting roadmaps of the national business initiative since 2012 with this aim in mind. Our efforts have produced results and even achievements on business-sensitive issues and we’ll continue working on these roadmaps.

The introduction of a uniform mechanism for administering tax, customs and other fiscal payments will make life considerably easier for business people. Several departments are working on this now.

Experts have already elaborated on amendments to the criminal and criminal procedure codes. They suggest increasing the number of economic crimes for which entrepreneurs may be relieved of criminal punishment provided they fully compensate for damages and pay all penalties. The damages threshold for instituting criminal procedures should be raised as well.

No matter what difficulties the Russian economy may be going through today, we have the reserves, desire and will to cope with them.