The Prime Minister answered journalists’ questions on the outcome of his visit to Israel and the State of Palestine. 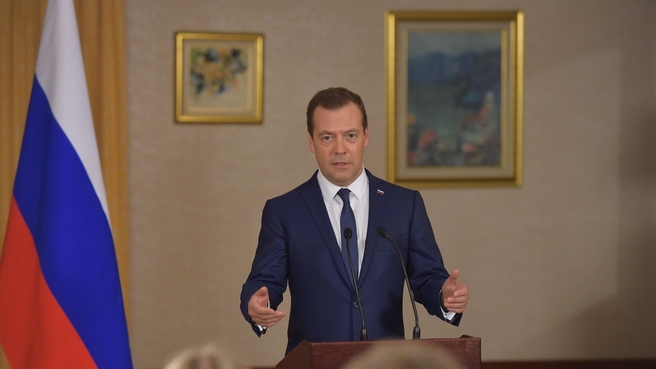 Question: Russia has been working actively for the revival of the Israeli-Palestinian peace process. At what stage is this process today?

Dmitry Medvedev: Unfortunately, it is at stage zero. I have discussed the issue during my talks with Prime Minister Benjamin Netanyahu and with President Mahmoud Abbas. Both sides have stated that a direct dialogue is a necessity yet there is no final agreement on holding this kind of meeting. Our country is ready to act as a mediator.

We continue efforts within the so-called Middle East Quartet. There are some proposals in this format that require consultations. The stance of other countries in the process will be crucial including the position of the United States, which has not been particularly active in this issue. Perhaps their activity will increase after the change of administration.

Question: Did you discuss at the talks the signing of a free trade zone agreement between the Eurasian Economic Union and Israel?

Dmitry Medvedev: The issue of setting up a free trade zone between the Eurasian Economic Union and Israel has been discussed in detail. Now it is important to reach a consolidated stand within the whole of the Eurasian Economic Union because Russia cannot hold such talks by itself. We must do it taking into account consultations with the other members of the EAEU, and such consultations will be held shortly.

Our Israeli partners assured us that they are ready to hold such talks with other Eurasian Economic Union members. If we succeed, it will benefit all the EAEU countries and the State of Israel. The agenda includes 40 more such agreements. Not all of them are at an advanced stage; some of them exist just as ideas. But we could make a qualitative step forward with Israel.

Question: The three-year privatisation plan put forward by the Russian Ministry of Economic Development envisions the selloff of a number of large assets. Will a plan this ambitious be realised when the markets are low? And will Rosneft be sold off this year?

Dmitry Medvedev: Rosneft is also on the list anyway. Privatisation has been proceeding slowly in the past year for different reasons, one of them being that there was no need to fill up the budget through privatisation. Now the necessity has arisen, and this is why we have intensified our work on the privatisation plan. A number of decisions have been taken regarding Alrosa and the controlling stake in Bashneft. The largest deal in the works is the sale of 19.5 percent of Rosneft shares. I hope it will be completed before the year’s end. Speaking of the aggregate revenue from the sale of Rosneft and Bashneft stakes, it will exceed a trillion roubles.

Question: Donald Trump spoke about his readiness to establish a dialogue with Russia. Could this lead to easing of Washington’s pressure on the EU and lifting of sanctions against Russia? Is the Government planning to prepare an alternative micro forecast for 2017 taking into account the possible lifting of sanctions?

Dmitry Medvedev: We a have a conservative forecast, a very conservative forecast, and a more or less optimistic one. If you are suggesting that we should make a “Trump forecast” for our budget, this will not happen, of course. We are guided by our priorities, which are in no way related to the activities of foreign governments; they stem from our perspectives on the current state of the Russian economy. Nevertheless, they are based on some assumptions. We assume that the sanctions will remain, just as a negative scenario. If the situation changes – good. If it doesn’t, that will mean we have laid much tougher criteria and will be able to fulfil all our obligations, including social ones. Therefore, regardless of the election results in whatever country, even such an important one as the United States, our projections remain invariable, including regarding the sanctions remaining in place. If the situation changes in that respect, we may adapt our forecast. But for now we are not going to change anything.