The documents signed following the talks: 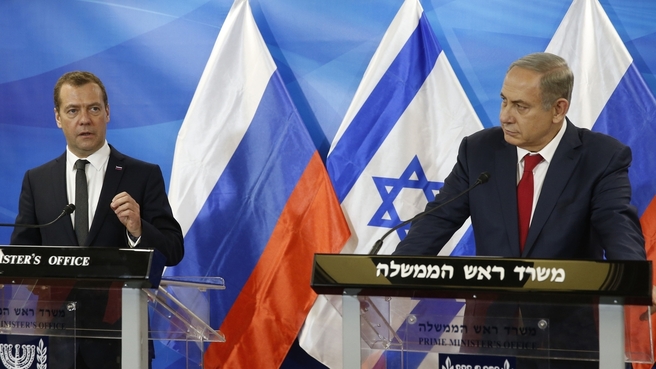 Benjamin Netanyahu (via interpreter): Your visit symbolises the consolidation of our relations, all the more so as it comes during the 25th anniversary of restoring diplomatic relations between Russia and Israel.

We have signed several agreements that will enhance our cooperation in various areas, for instance, agriculture and construction. We have a common task – to promote a free trade agreement.

Dmitry Medvedev: The 25th anniversary of restoring relations is a decent amount of time, but we should look ahead.

Our countries are linked by common values. We have a shared understanding of the outcome of World War II, of the critical importance of the victory over Nazism, and of anti-Semitism and all xenophobia as unacceptable.

However, we also face common challenges, primarily terrorism. Today it is threatening the whole planet but is particularly pronounced in this region. The Russian Federation also suffers from terror. This terror has the same roots, which is why we must counter it together. I’m referring to the coordination of our efforts to build up security and defence, which has been raised to a completely new level in recent time. The Russian Federation also opposes the proliferation of nuclear weapons. We must work together (and we are ready to cooperate with all interested states) to destroy the core of terrorism, which is currently represented by Daesh or ISIS.

Israel is our major trade partner in the region but we have done little so far to promote trade, economic and investment cooperation. Today we have signed documents to this end. We are interested not simply in increasing our trade, which went down recently, but in qualitatively changing the character of our relations.

Russia has unique conditions for the agriculture business, while Israel has excellent technology. Combining these can produce outstanding results. We will be able not only to supply quality food to each other but also to sell it on third markets.

The second area is innovations. We would like to continue such cooperation, in particular, on the basis of the signed documents. We should share commercially viable ideas that would allow us to make money.

We have made progress in tourism. More and more Israelis are coming to Russia. Over 300,000 people from Russia made trips to Israel last year.