On arrival in Israel, the Prime Minister answered questions from Russian journalists. 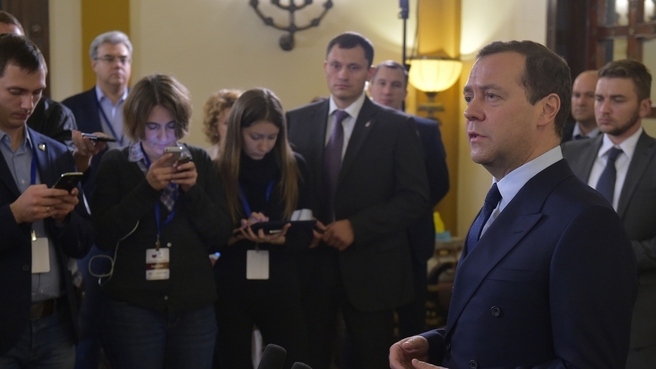 Dmitry Medvedev’s statement for the press

Question: Mr Medvedev, you will begin your visit to Israel today and will subsequently go to Palestine. What do you expect from your talks with the President and the Prime Minister of Israel?

Dmitry Medvedev: I plan to meet with the President and hold talks with the Prime Minister of Israel. We maintain full-scale and regular contacts. This year alone, Prime Minister Benjamin Netanyahu visited Russia several times, and the President of Russia maintains contact with him. Our upcoming meeting will focus on ways to deepen our economic ties, but also many other issues, considering the current global developments and the persisting problems in the Middle East. They will certainly be in the focus of our attention. We will discuss all issues on our agenda, and I will tell you about the results later, because the talks are scheduled for tomorrow.

Question: The US presidential election has produced an unexpected result today. What is your opinion of the outcome? Do you think this will influence the future relationship between Russia and the United States?

Dmitry Medvedev: The outcome was unexpected for some and expected for others. I believe that there is too much talk about the US election. After all, they concern only one country, even though it is a large and very important country, a permanent member of the UN Security Council and a great economic power. Still, it is US elections and US alone. Nevertheless, the President of Russia and members of parliament have offered their views on their outcome. They said, first, the result of the elections is the sovereign choice of American citizens. Second, we respect their choice and are ready to forge a relationship with President-Elect Donald Trump and his Vice-President, whom I have congratulated on his election. Further developments will depend on the stance of the new administration. If they are willing to restore full-fledged cooperation with Russia and close this sad chapter in our history, which has been written these past few years by the current US administration, we stand ready to do this too. Our countries bear special responsibility for global security, due to their status and for reasons known to everyone.

As for the election results, they should be analysed by political scientists. I can only say that victory by a so-called political outsider is unusual for the US political system. I have read many comments which say that Donald Trump has defeated the system. I don’t think this is true; rather, it is the political system that has allowed him to win. As for the future, this political system will likely try to keep the new president in line, which it can certainly do because the US political system is very powerful. Will President Trump be able to withstand this pressure? Will he stick to the priorities he declared during his presidential campaign? Time will show.