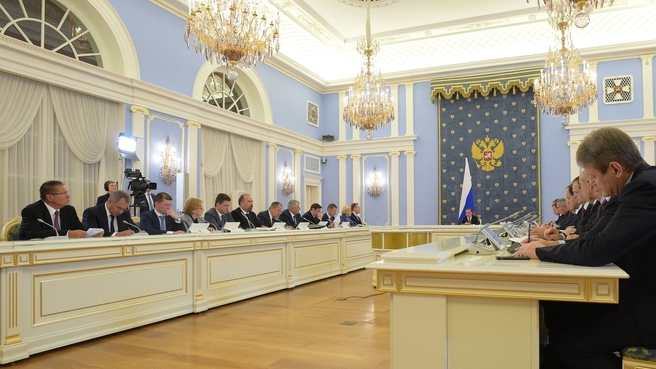 The Government is about to complete the drafting of the budget for 2017 and the 2018-2019 planning period. The entire document package is to be submitted to the State Duma by 28 October.

We devised the state budget along the same lines as in the previous two years. I’m referring to sanctions and various restrictions, as well as the complex processes unfolding on the commodity markets and facing Russia’s key trade partners.

A conservative socioeconomic development scenario was used as a baseline, assuming that we need to be quite cautious in evaluating oil pricing trends.

We factored into our projections the possibility that sanctions would remain in place alongside retaliatory measures we had introduced. That said, even under this baseline scenario, the economy is expected to gradually recover from stagnation and resume growth. As early as next year, we expect to see signs of recovery and even economic growth that would only consolidate moving forward.

The Government will persist in its efforts to contain inflation to a maximum extent. This year, the inflation rate has almost halved, dropping from 13 percent in December 2015 down to 6.9 percent in August 2016. The Bank of Russia intends to reduce the inflation rate down to 4 percent by the end of next year and keep it there from then on.

We need to improve the availability of borrowings. This year, the Bank of Russia has cut the key interest rate twice already. We hope that next year’s economic environment will enable us to continue promoting lending.

By enacting customs and tariff regulations, the Government intends to keep facilitating import substitution and support Russian exporters, primarily those operating outside the oil and gas industry. Amid global economic uncertainty, and despite pressure from sanctions, we can effectively deliver on these objectives by operating within the Eurasian Economic Union. We intend to expand industrial and technology cooperation within the Union.

There is also a need to complete the effort to harmonise customs and tariff policies of the five EAEU member-states. This will provide our producers with maximum advantages within the EAEU free trade area and under free trade agreements that the Union signs with other countries.

We intend to stand up to the interests of Russian exports in our bilateral talks with the leading trade partners, as well as on multilateral platforms such as the World Trade Organisation. The Government will be consistent in its efforts to remove any barriers that Russian goods may face on foreign markets.

We will continue to improve the excise and taxation framework for minerals extraction. In doing so, we need to make sure that the additional fiscal burden does not affect investment programmes or prevent companies from growing, exploring and developing reserves.

Additional subsidies for regional investment projects will remain in place, especially for vital regions such as Russia’s Far East.

Overall, the tax burden should not increase for companies. Moreover, for small and medium-sized enterprises, as well as people operating as individual entrepreneurs in the services sector the very mechanism for reporting and paying taxes should become more straightforward and transparent.

The budget must ensure macroeconomic and social stability.

The Government will fully honour its social commitments no matter the economic situation.

We have gotten through the hardest times while maintaining the stability of public finances on the back of reserves, support measures for specific industries and social policy decisions.

Budget revenue and spending were calculated based on the conservative scenario. Revenue is expected to come in at 13.4 trillion roubles (15.5 percent of GDP), and expenses at just over 16 trillion roubles with the deficit equal to 2.7 trillion or slightly above 3 percent of GDP. Given the current state of the Russian economy, this level of deficit is acceptable and below our expectations for this year. 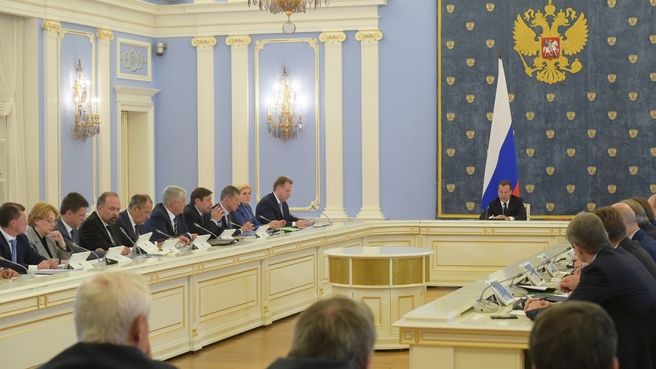 Russia cannot afford to live on credit, as some countries tend to do. With this in mind, the Ministry of Finance proposes to engage in budget consolidation in order to reduce the deficit by one percentage point to GDP per year so as to gradually achieve a balanced budget.

The Government is keeping in place targeted support measures for the key industries, while keeping inflation at bay. We will provide funding for key infrastructure projects and companies operating in the real economy, and continue to provide incentives in areas like innovation, investment and entrepreneurship.

We need to set clear benchmarks for those who plan to invest in the real economy. It is for this reason that we decided to come back to a three-year budget planning cycle.

As in the previous years, a special reserve of up to 100 billion roubles will be set aside for implementing priority projects and goals, among other things.

The project management principle is clear: we need to channel resources into areas that have the potential to provide maximum returns for both the people and the economy, focusing on achieving concrete results such as building schools, hospitals, housing, safe roads and new industrial plants.