The International Association of Science Parks and Areas of Innovation (IASP) unites professionals who manage science parks, business incubators, and science and innovation related institutes. The association comprises 40 science parks throughout the world. The IASP promotes their development and efficiency, and has a positive impact on the competitiveness of companies and entrepreneurs.

The IASP World Conference is a key platform for the leaders and top officials at science parks from various countries to meet, communicate and exchange experience.

The 2016 IASP Conference, which is being held in Moscow for the first time, includes 1,500 participants, with over 500 representatives from the leading foreign science parks and areas of innovation from 70 countries. 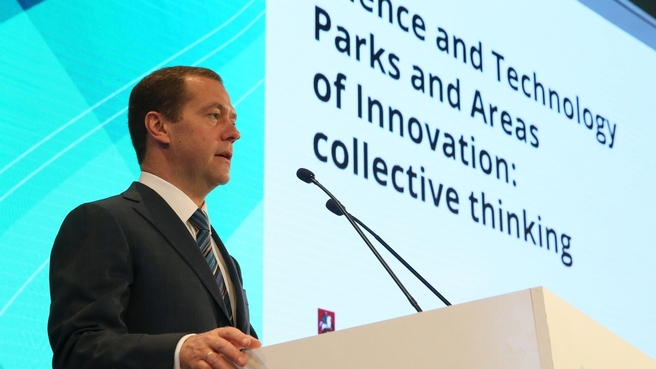 Russia has done a great deal to promote innovation in recent years. This meeting is evidence of our efforts.

We successfully carried out a major project, Skolkovo. It involves 1,500 companies from 65 Russian regions. The creation of Europe’s largest science park is an important part of this project. Moscow has 26 science parks, and a number of science parks operate in other places.

We have various models and forms of innovation, which are applied in various regions. These are special economic zones, industrial parks, high-tech science parks, and innovation clusters. We also have science and academic towns, which were created in Soviet times but still continue to address various technological tasks. The most successful science parks attract promising residents, who implement project maintenance programmes, cooperate with development institutes and international partners.

The Russian Government has supported the programme to develop “children’s science parks.”

Your association unites the leading science parks from 70 countries. This geography indicates that most objectives in innovation are generally similar. Russia, the European Union, China, Brazil, Saudi Arabia, the US and many other countries understand this. It is very important to communicate and pursue answers to these questions.

There are many talented people in Russia, who can produce promising ideas and projects. But technological solutions have become ever more complex and require expertise in various disciplines to effectively implement these developments. Specialised equipment is needed to turn an idea into a product. The institute of science parks enable startup businesses to access this infrastructure.

A modern science park is also a sort of social platform for representatives of the academic community, research centres, industrial companies and venture funds. Conferences and forums like yours allow this kind of communication to take on an international dimension. They allow us to compare various models for organising and operating science parks, to identify the advantages and disadvantages of such models, to evaluate successful experience of commercialisation and launching startups, and to compare regulation and support measures.

I believe that you will focus on these issues and create useful recommendations, including to those who make decisions in the Government.

I invite all those here to take part in the traditional annual Moscow-based forum, Open Innovations, which will run from 26 through 28 October at Skolkovo Technopark.