Expanded board meeting of the Ministry of Finance

The results of the Ministry’s 2015 performance and tasks for the upcoming period. 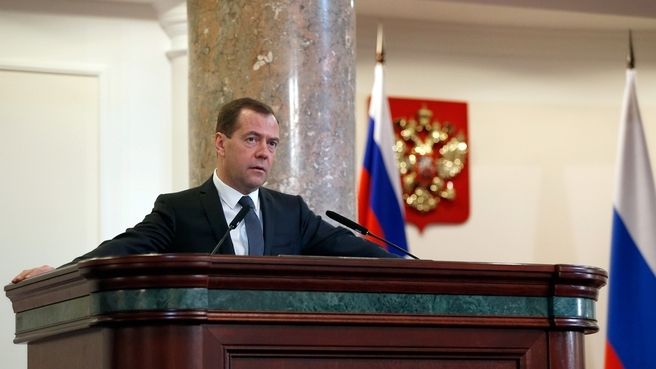 They repeatedly predicted catastrophic consequences for us, saying that our economy will be left “in tatters.” It is not in tatters. There are difficulties, but Russia’s current economic and financial situation is much better than it was in other periods in our history.

Last year we achieved three tactical goals: we helped our economy adjust to new conditions, prevented inflation from running out of control and maintained stability in the employment market.

Following a very difficult first six months, our inflation stabilised, although we failed to prevent a decrease in gross domestic product. However, this decrease was half the size of the one in 2009. Inflation did not exceed 2008 levels, and registered unemployment grew very mildly because we worked out a package of measures to support employment.

The coordinated actions by the Ministry of Finance and the Bank of Russia helped maintain the system’s stability, even though oil prices resumed their downward movement at the end of the year.

Although the ratings of all other commodity exporting countries were downgraded, Russia’s credit ratings were not changed this year, possibly because they had been set too low.  We also believe that apart from purely economic factors, which influence the rating agencies’ decisions, there were also political factors at play.

The Government action plan to support socioeconomic development includes not only tactical measures but also decisions aimed at boosting the development of various sectors, such as agriculture, and at creating the basis for mid- and long-term growth.

Our tax policy also provided for enhancing the effectiveness of tax management. We have made the first step towards creating an integrated mechanism for monitoring tax collection.

Our budget policy, which largely remained conservative, has helped us maintain stability of our budget system.

The budget was adjusted in due time based on a more realistic assessment of the annual average crude oil price. We almost immediately opted against a proportionate reduction of expenses in nearly all spheres, streamlining our expenditures very accurately.

Early this year we again faced a plunge in oil prices, yet we have managed to avoid budget adjustments so far. We will monitor all the subsequent changes. This is especially important if we return to three-year budget planning.

We must secure the positive processes that began last year, including the growth of revenues from the non-oil and gas sectors. They went up to 57 percent, or by 10 percent in nominal terms. This is not only a result of falling oil prices, but also the dawn of a new period in the development of domestic production.

All of this was largely made possible by the implementation of a challenging bank recapitalisation programme. We announced it in late December 2014, thereby calming the people and businesses and actually creating the foundation for a resurge in lending and for the normal operation of the banking system.

A system for stimulating housing construction was formulated last year and a number of other objectives were also achieved.

We were successful in keeping our public debt level low. Now the debt amounts to a mere 13.6 percent of the GDP, which presents quite decent opportunities for the future.

Despite the stressful situation on financial markets, the ministry raised over 800 billion roubles on the domestic financial market, while the market needed and continues to need new financial instruments. Inflation-adjusted bonds have been introduced for the first time and a number of other instruments are being discussed.

Our number one objective is to implement the approved decisions within the framework of the 2016 budget with the end goal of having only a 3 percent deficit and to draft a new three-year budget.

Second, it is obvious that budget adjustments of this kind are impossible unless we modify our approaches to budget policy and budget spending. Though most optimal, the state programmes mechanism we introduced a few years ago has yet to reach maximum efficiency.

Third, we also need to continue consolidating the financial system, the more so since  foreign sanctions against Russian companies and the Russian financial sector are still in place and, judging by the indicators that we have, they are quite likely to be preserved, and this means that we will have to bear the key burden on our own. This is why it is necessary to develop new instruments and generally increase savings rates in the Russian economy.

The main guidelines for the development of the financial market were approved early in March. The document embraces a wide range of issues and now we must address the tasks it envisages.

Yet another objective is to ensure the Russian Treasury’s seamless fulfilment of the functions that used to be performed by the scrapped Federal Service for Fiscal and Budgetary Supervision. It is necessary to streamline a new mechanism that would be instrumental in financing the budget spending rather than proving to apply the brakes on it.

Last year, Russia preserved a high indicator of the 102-country budget openness index. The Russian Finance Ministry holds the 11th position. This is a good indicator in itself.

26 November 2020 On 2 December 2020, Prime Minister Mikhail Mishustin and Premier of the State Council of the People's Republic of China Li Keqiang will hold the 25th regular meeting of the heads of government of Russia and China via videoconference
26 November 2020 On 30 November 2020, Prime Minister Mikhail Mishustin will take part in a meeting, via videoconference, of the Council of Heads of Government of the Shanghai Cooperation Organisation
25 November 2020 Deputy Prime Minister of the Russian Federation Alexei Overchuk held a meeting with Speaker of the National Assembly (Majlisi Milli) of Tajikistan Rustami Emomali
25 November 2020 Deputy Prime Minister Alexei Overchuk addresses the 6th international conference Preventing Disruption in Education 6th international conference on assessing the quality of education, Preventing Disruption in Education, as part of the Education 2030 project and the publication of the OECD report What Students Learn Matters: Towards a 21st Century Curriculum.
24 November 2020 Dmitry Chernyshenko chaired the 24th meeting of the Russian-Chinese Commission on Preparing Regular Meetings of the Prime Ministers

Russia is committed to expanding economic cooperation with China in order to consolidate neighbourly relations and to ensure progress in both countries, the Deputy Prime Minister pointed out.
24 November 2020 Mikhail Mishustin’s meeting with coronavirus vaccine manufacturers

Mikhail Mishustin: “In order to begin mass vaccination as soon as possible, well-managed coordination of action is necessary at all levels – from developers and scientists to manufacturers and suppliers.”
23 November 2020 Meeting of the Government Coordination Council on controlling the incidence of novel coronavirus infection in the Russian Federation

Mikhail Mishustin: “The Government is expanding the list of essential and vital medications. It will include the existing anti-coronavirus vaccines regardless of their names. They must be accessible to all those who need to be vaccinated.”
23 November 2020 Meeting with deputy prime ministers

The Prime Minister addressed a plenary discussion on Russia’s Transport: Speed, Convenience and Efficiency, at the 14th International Forum and Exhibition Transport of Russia. He also presented state awards to the transport sector’s employees.
16 November 2020 Mikhail Mishustin’s telephone conversation with Prime Minister of Armenia Nikol Pashinyan
16 November 2020 Meeting of the Government Coordination Council on countering the spread of the novel coronavirus infection in Russia

Mikhail Mishustin: “The Government is allocating funds to establish mobile outreach medical teams. Subsidies will be given tor medical institutes and clinics that have serious research schools and extensive practices. There are 32 of them in the country. Medical workers in the regions will receive timely consultative and methodological assistance. This will make it possible to reduce the load on regional health systems.”
12 November 2020 Mikhail Mishustin spoke by telephone with Acting President, Prime Minister of Kyrgyzstan Sadyr Japarov
9 November 2020 Meeting of the Government Coordination Council to control the incidence of novel coronavirus infection in the Russian Federation

Mikhail Mishustin: “I would like to ask the Healthcare Minister and heads of regions to personally oversee assistance to medical facilities and to patients who are being treated at home. This includes test kits, personal protection equipment and medication. Patients in need of hospital care must be provided with the opportunity to be hospitalised. No patient should remain without medical help.”
9 November 2020 Government personnel changes

Excerpts from a briefing with deputy prime ministers.
6 November 2020 Meeting of CIS Council of Heads of Government

The agenda of the meeting includes economic cooperation, overcoming the consequences of the COVID-19 pandemic, restoring the economic growth rate in the CIS member states, elaborating an action plan to implement the first phase of the Strategy of the CIS Economic Development, as well as boosting cooperation in innovation, transport security, interregional and border cooperation, and the peaceful use of nuclear energy.
28 October 2020 Mikhail Mishustin sends a message of greetings to the participants and guests of the 3rd International Conference “Sustainable tourism: Global challenges and Russian perspective” in Sochi
1
Show More