The transcript of the meeting's beginning: 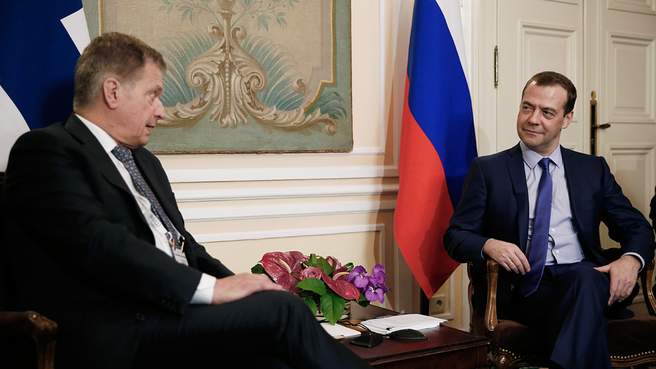 Sauli Niinisto (via interpreter): Mr Prime Minister, I appreciate it very much that you found time for our meeting. Our last meeting was probably held in Moscow if I remember correctly, and we met in Sochi as well.

It is very good that such contacts exist between representatives of Finland and Russia, and it can be seen at a high level as well. I know that you have maintained good contacts with the Finnish Prime Minister, and our interior ministers discuss our common issues as well.

We know that you have given an interview where you mentioned refugees, among other things. We in Finland have paid attention to this interview, by the way. You were probably right about the things you said, mentioning the situation in Europe, illegal immigration, human trafficking, and so on. We couldn't help but notice that such occurrences are taking place on the Finnish-Russian border. I have to say that this is a new phenomenon because over a long period of time there has existed a mutual system that did not allow people to approach the border without a visa.

As for granting asylum or asylum applications or international protection, both Finland and Russia are considered safe countries in this regard, and in fact asylum seekers cannot choose the country they are appealing to, in accordance with regulations. But these issues are actively discussed by the related departments, including border agencies. We hope and expect that we will find a mutually satisfying solution.

You also mentioned economic difficulties, and we are concerned about them as well. I would also be very interested to hear your opinion as regards the situation in Syria and the results of yesterday's talks.

Dmitry Medvedev: Mr President, I am glad to meet with you again as well. President Putin sent his regards to you, and we are looking forward to meeting you in our country in March. You were right in saying that we have maintained active contacts despite various current difficulties. This is good for further Russian-Finnish relations.

Recently, I met with my colleague, Prime Minister Juha Sipila, in St Petersburg.

We covered nearly all areas of bilateral relations – from the economy to various issues, security and migration among them.

Thank you for paying attention to the comments on migration I made in my interview. I can only reiterate that I believe that the recent migration policy is unsatisfactory, at least within the EU, which causes problems for everyone, including Germany, which we are currently visiting, Finland and Russia. To handle this challenge, we have to solve two problems.

First, we should try to eliminate the cause of this powerful migration current. And we are going to discuss this at the Munich Security Conference. But we also have the Russian-Finnish aspect to this is issue. After meeting with Prime Minister Sipila, I issued instructions to our government agencies to hold talks with the respective Finnish authorities. Following these instructions, the heads of Russia’s Federal Security Service and Federal Migration Service met with the Finland’s minister of the interior. They emphasised that on the one hand it is essential to adhere to European conventions both for Russia and Finland, but, on the other hand, we had the chance to seek a solution based on our 1994 agreement on checkpoints along the Russian-Finnish border. Our colleagues will continue working on this.

And we shall, of course, exchange opinions on the situation in other fields.

Deputy Prime Minister Dmitry Chernyshenko held a meeting with Foreign Minister of the Socialist Republic of Vietnam Bui Thanh Son to discuss the implementation and expansion of the list of the top priority Russian-Vietnamese investment projects. They focused on actions designed to build up cooperation between the two countries in trade, the economy and banking.
27 September 2021 Meeting with deputy prime ministers

Agenda: Renewing and expanding the employment incentive programme, Concept for Creative Industries’ Development, promoting domestic tourism.
24 September 2021 Alexander Novak speaks at high-level dialogue on energy at the UN General Assembly The key theme of the event is to attain the Sustainable Development Goals and a clean power industry
1
Show More