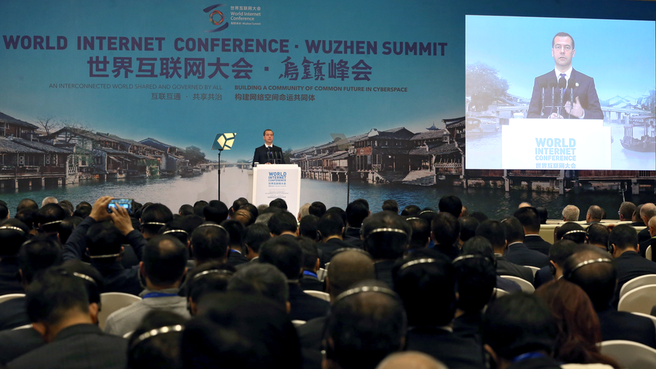 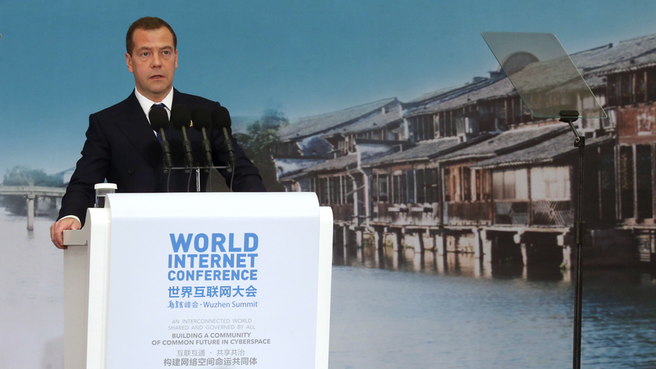 It is very important for us to combine the spirit of freedom, which accompanied the initial development of the Internet, with the need to develop universal rules of conduct in cyberspace.

The Russian Internet marked its 20th anniversary last year. Its audience nearly reached the 80 million user mark this past year, which means that more than half of the country’s population are Internet users. The total volume of the Russian Internet economy amounts to 2.2% of gross domestic product. Many Russian IT companies have become established and respected in international markets. I am confident that this sector will continue to develop, including through e-commerce and the provision of services, including government services. It is of crucial importance for Russia, which has the world’s largest territory and divided into 11 time zones, to provide equal and high-speed access to the Internet. Our goal is to be able to provide this opportunity in the next few years to nearly all citizens across the country. Working towards this end, we have launched a project to eliminate digital inequality by connecting users in outlying towns to the fibre-optic network.

It is a paradox, but despite the Internet’s influence on the life of people and whole nations there are no binding rules of conduct in this sector. Responsibility for some Internet development issues have been distributed among a number of organisations, which do not appropriately coordinate their activity.

The Internet must remain an open, global and a distributed resource. At the same time, there must be some elements of state governance of the Net, this is unavoidable. Moreover, governance has been introduced in some countries, including Russia, but it should balance free access to information against legal provisions on people’s safety and their fundamental rights.

Russia has been consistently advocating that each country have equal access to Internet governance and maintain their sovereign right to regulate their national segments. This stance has been sealed in a number of documents, including the Ufa Declaration of the BRICS leaders.

In legal terms, the Internet is a new and highly complicated area of regulation. The legal framework is lagging behind the rapid development of information sharing and technology. How can we distinguish between online and offline jurisdictions? How can we guarantee people’s right to privacy? How can we protect copyright and other exclusive rights? Who will ensure the smooth operation of critically important Internet infrastructure? Who will distribute accounts and addresses? In other words, what international structure will do this, and what will be the rules? We should join efforts to find answers to these questions.

No country alone can claim the role of the sole universal regulator of the world-wide web. There are no historical privileges or traditions in this sphere.

Russia supports the idea that the international community must play a bigger role in Internet governance and that a global policy in this sphere be developed. We believe that this goal should be achieved under the auspices of the leading international organisations, including the UN, and with reliance on the industry-specific organization – the International Telecommunication Union (ITU). In the future, this or any other organisation, were it to be created, could be granted the authority and powers to develop international legal norms and standards of Internet governance. In addition, it could coordinate the industry-specific international institutions.

Criminals and terrorists are actively using the Internet, as evidenced by the recent terrorist attacks in France and other crimes of terror. Moreover, far-reaching and sophisticated online surveillance systems have appeared. Taken together, these factors threaten the security and sovereignty of states, engender a chain reaction of mistrust and spur on a new race for information weapons.

The international community, therefore, should develop uniform rules of conduct in the information space. These rules must be based on the non-use of force, respect for national sovereignty, non-interference in the internal affairs of other states and compliance with basic human rights and freedoms. The countries of the Shanghai Cooperation Organisation have drafted a code of conduct in the sphere of international information security. Its latest update has been submitted to the UN this year and is open to be accessed by all the countries concerned. We urge the international community to analyse this code and, if possible, support its underlying idea.

A  highlighted some very important provisions in this year’s report UN Group of Governmental Experts on international information security.. The report mentions the need to prevent conflicts arising from the use of ICT and that states adhere to international law.

The participants of the 70th UN General Assembly expressed their wholehearted support for a resolution on international information security, which Russia has submitted to each UNGA for the past 17 years. It was co-authored by over 80 different countries this year.

We invite everyone who is willing to discuss the development of new technology, including Internet technology, to attend the annual Open Innovations forum in Moscow. The next forum will be held in October 2016.

A protocol was signed on the statistics of railway freight traffic between the two countries in 2022 and their plans for this year.
1
Show More